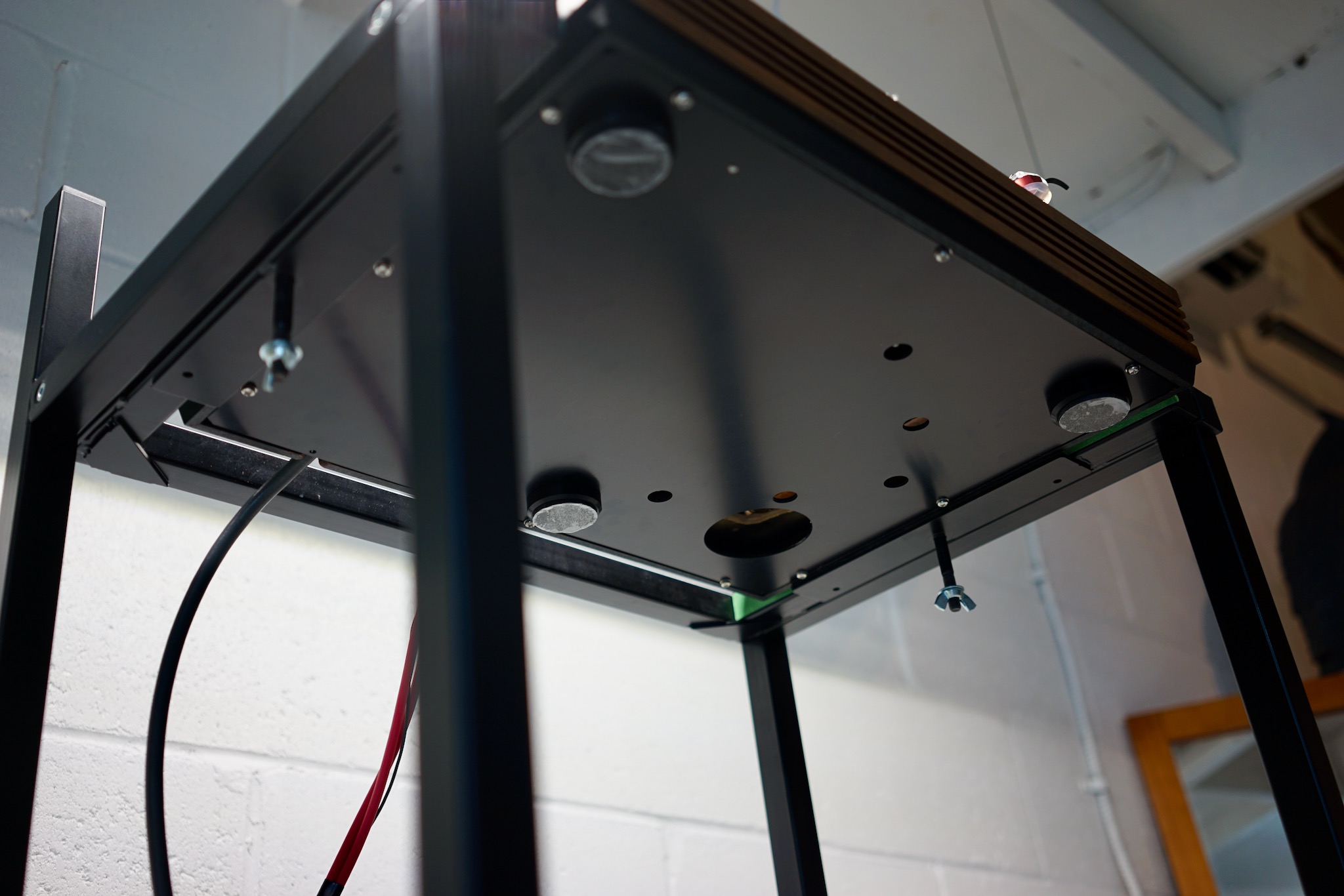 This latest installment of the LP12 Modification Frenzy features the Stack Audio Serene Baseboard. You can read all about the installation of the Serene in this previous post.

I didn’t need the Stack Audio Serene Baseboard to sound better than my previous setup, which was no baseboard. What I needed it to do was to allow me to get my turntable level when seated on a sideboard. Its three adjustable feet made that possible — at £150, that’s already a win for me.

So I was very pleasantly surprised to note that it also offered sonic improvements. You hear a lot about the effects of top plates — I’ve written about them myself, impressed as I was with the improvement offered by my Tiger Paw Khan top plate. You hear a lot less about base plates, which many people (including myself) prefer to just do without. It’s time to revisit that assumption.

If I had to pick one word for the effect of the Serene Baseboard it would be “focus.” I heard a wider soundstage, better clarity of presentation, better separation of instruments, and more controlled, tighter bass. These effects were most noticeable when the turntable was mounted on a sideboard — but I still heard improvements with the deck sitting on a dedicated TT wall shelf. This leads me to think that the Stack’s vibration damping affects not just external vibration, but also controls internal resonances within the deck. I’ve got some more thoughts on this below, in the section on “Ringing.”

I’ve given up on my previous testing methodology — now that I’ve given up my headphone system, it no longer makes sense — but I’d say the Serene Baseboard made a solid 5% improvement in my system. Given the price and the other advantages offered, this one is easy to recommend.

Note: Stack Audio provided this baseboard to me for review at no cost.

Since the Serene wouldn’t fit on my main deck’s plinth — a prototype aluminum Mober plinth — I installed it instead on my newly-formed second LP12, which is made up of a bunch of discarded parts from previous rounds or stuff from future rounds. It’s the one you see on the bottom in the photo.

That was a mouthful. Now, the music.

I’m thoroughly sick of my main LP12MF Test Tracks and have promised myself never again to crush my love of my favourite songs by listening to them endlessly. So I’m adopting a more flexible approach to test music. Right now, these are the seven discs I’m listening to:

Here’s how I actually did the testing.

First, I got my sideboard (okay, it’s a fancy tool chest!) level. This is not the sideboard I actually plan to set this LP12 up on, but it definitely presents an ideal torture test for these feet — a big heavy hollow box with tons of stuff in it — and it has the advantage of being in my “reference” system.

Then I listened to all seven sides in the following configurations:

I will spare you all my detailed notes this time (and henceforth). They’re much more useful to me than to you! We’ll stick with summaries from now on.

The differences between Listening Setup 1 and Listening Setup 2 were very obvious. The change was in focus. In Low’s C’Mon especially I felt Allan Sparhawk’s voice attain a kind of laser focus I was frankly surprised to achieve in a deck with a pressed-steel subchassis and MDF armboard; it’s not at the level of my main LP12, but it was much improved. Likewise, the bass tightened up on all the discs, especially noticeable on the drum track on the M&K Sampler and the killer, massive kick drums that open “Psycho Killer” on Stop Making Sense.

I wondered whether the damping effect of the Serene’s construction (and the fact of having a baseboard installed at all) might kill some treble extension, for example in the bells and triangle in Pentangle or the vibes in Out to Lunch. But I noticed no such loss — indeed, those albums both sounded quite a bit better, since the bells, triangles, and vibes were more clearly placed in the soundstage.

I was curious whether this effect would be more pronounced at higher volumes, and less pronounced at lower volumes, given the fact that the Serene’s sorbothane feet provide isolation from room vibration. The answer is a clear yes. Turning the volume up to 12 o’clock (insanely loud in my setup), things got decidedly murky without the baseboard; with the Serene, I wasn’t able to notice any discernible change in the sonic profile at higher volumes.

The differences between Listening Setup 3 and 4 (on the dedicated wall shelf) were much more subtle. This is as expected, as the shelf is doing a lot of work isolating the deck from ambient vibrations. But I still heard a difference in terms of soundstage and clarity. So the Serene is doing more than just providing isolation — it’s also changing the character of the deck’s sound. I’ll speculate on the reasons below.

I was sufficiently impressed that I would love to try the Serene Baseboard on my main LP12. This would involve drilling and tapping screw holes into my aluminum plinth — a massive PITA, but one I’m considering.

Stack Audio have a very clear design philosophy. Whereas a lot of the really expensive and fancy LP12 upgrades are machined from solid aluminum — Linn Keel, Tangerine Audio plinths, the Tiger Paw Khan top plate I use — Stack do things differently.

Solid aluminum, you see, rings like crazy. Here’s an example of what I mean. This is me holding up my Khan top plate (machined from solid aluminum) installed in my prototype Mober plinth (also solid aluminum) and knocking them:

I also made some sound recordings of my Mober and Greenstreet subchassis, both machined from solid aluminum, and they both ring similarly:

Now, naturally none of these rings like that when they’re in an assembled LP12. The suspension, primarily, controls things. Knock on the plinth in system and it sounds nothing like that. Indeed, this is precisely what the Mober suchassis sounds like when you knock it once it’s assembled.

But still, I’m sure all that ringing potential makes some difference.

Stack Audio products are all designed to minimize vibration. They do this, for the most part, by using constrained layer damping (CLD). They use aluminum, but they use two layers of it and put a vibration-damping adhesive (AVDC) between them. (Apparently this AVDC turns vibration into heat.)

Constrained layer damping is used in the Serene Baseboard, as you can see in this photo: two layers of aluminum with some adhesive between them.

And as you can hear here, it makes a massive difference. No ringing at all.

In addition to the CLD used in the base plate, the feet also use sorbothane to damp vibration. Stack Audio also have a fancier version of this baseboard, the Ultimate Baseboard, that uses Solid Surface rather than CLD aluminum as the main material (it’s apparently even more inert) and six constrained layers for the feet. Stack are very serious about controlling vibration!

Well, based on my listening here, I’m pretty curious now, myself. I suspect that the Serene Baseboard is doing two things: isolating the deck from external vibrations through its sorbothane feet, and damping internal vibrations with the constrained-layer construction of the plate itself.

I’m planning to put this to the test by doing a full “de-ringing” of my LP12. I hope to try Stack’s top plates (Serene and Ultimate, both of which use CLD); an AudioFlat RubiKon subchassis/armboard (a pioneer of CLD in LP12 upgrades!); and see what happens when I go back to my afromosia plinth in my main LP12 from the super-ringing Mober plinth.

Look forward to more on this in the coming months…

I’ve gone done a similar path. I am finishing upgrades to my c88 Valhalla/ITTOK LVII deck. Cirkus Bearing, Linn springs, ITTOCK Arm, Linn Arm Board, Linn Motor. Stack Serene subchassis, springs, top plate, bottom plate, brace. Mober Inner Platter. Mose Hercules II outboard PS. Sonic results are outstanding- much darker background, deeper and tighter bass response, greater midrange clarity, extended and cleaner treble. Central images are rock solid, soundstage is wider and deeper. Images hang in space. All of the subtle details that represent the difference between acceptable and better (and greater as you go farther out) exist at the margins. It doesn’t take much to blunt a transient edge, or drown out that last bit of treble air. A systematic reduction in vibration and extraneous noise leaves more space for hidden details to emerge. A completely still body of water can reflect an image with the clarity of a mirror. Just one small ripple destroys the effect.

There are a lot of ways to improve an LP12, without paying exorbitant sums to LINN.

Thanks for your thoughts — and I love that image of the ripple in the water! I’m still not convinced that all ringing is bad — I prefer the Mober subchassis over the relatively dead Linn Kore — but I’m really interested to investigate further…

I think the CLD base board is an excellent idea. I’m not sure about the Sorbothane feet though and it may be worth experimenting with hard, solid ones – cones perhaps.

hifiafreply
– In reply to: Mark

I’ll definitely give that a try. Any recommendations for particular cones to try out?

Hi Adam, interesting, I think Theo sells some good stuff. Can’t reply to you on AF as Mark has kicked me off! Grumpy pumpkin. I was reading about your experiences with the Naim V1. I auditioned one when looking for a headphone amp/dac. It was OK, but no more than that. I settled eventually on the Woo Audio WA7 fireflies. If you get a chance, give it a listen. It’s a revelation compared to the Naim.
https://wooaudio.com/amplifiers/wa7

I just installed the Stack Ultimate Structure set (top plate, crossbar, baseboard) two weekends ago, and while I didn’t do it one at a time to isolate effect, the overall effect was “more resolution/focus” as well for me. I also love how ‘solid’ the whole deck feels due to the incremental weight of the ultimate basebaord. And the top plate is beautiful. Rest of deck is Mober subchassis, cirkus, Vinyl Passion Revolution PSU, AudioMods Series Six arm, and Benz Micro Ruby Z cart. I’m incredibly happy with where things stand.

hifiafreply
– In reply to: Kim

Sounds like a great setup. I’m really interested in the “Ultimate” set myself. I should have the top plate to review soon, but I’m definitely curious about the ultimate baseboard, too, especially for what it might do to my ringing-prone Mober plinth…

I have the Serene baseboard but it is silver. I thought the ultimate was black? I also have the Serene top plate and think this is a very good upgrade over the stock item. I did install an extra corner brace in mine to get best result (was still a little resonant before I did this) but once done I am super confident in it now to provide a ridged non resonant platform. I am very interested to see if you find the Ultimate any better!

I fully recommend the full Ultimate Set up – been using my now for a year and although I do have more upgrades in mind for the fruit crate, I’ll be keeping the Stack Ultimate set up.

I’m really eager to try it!

How do you think these stack baseboards stack up against the Linn Trampoline 2? One of the few Linn upgrades that are not crazy expensive.
Cheers,