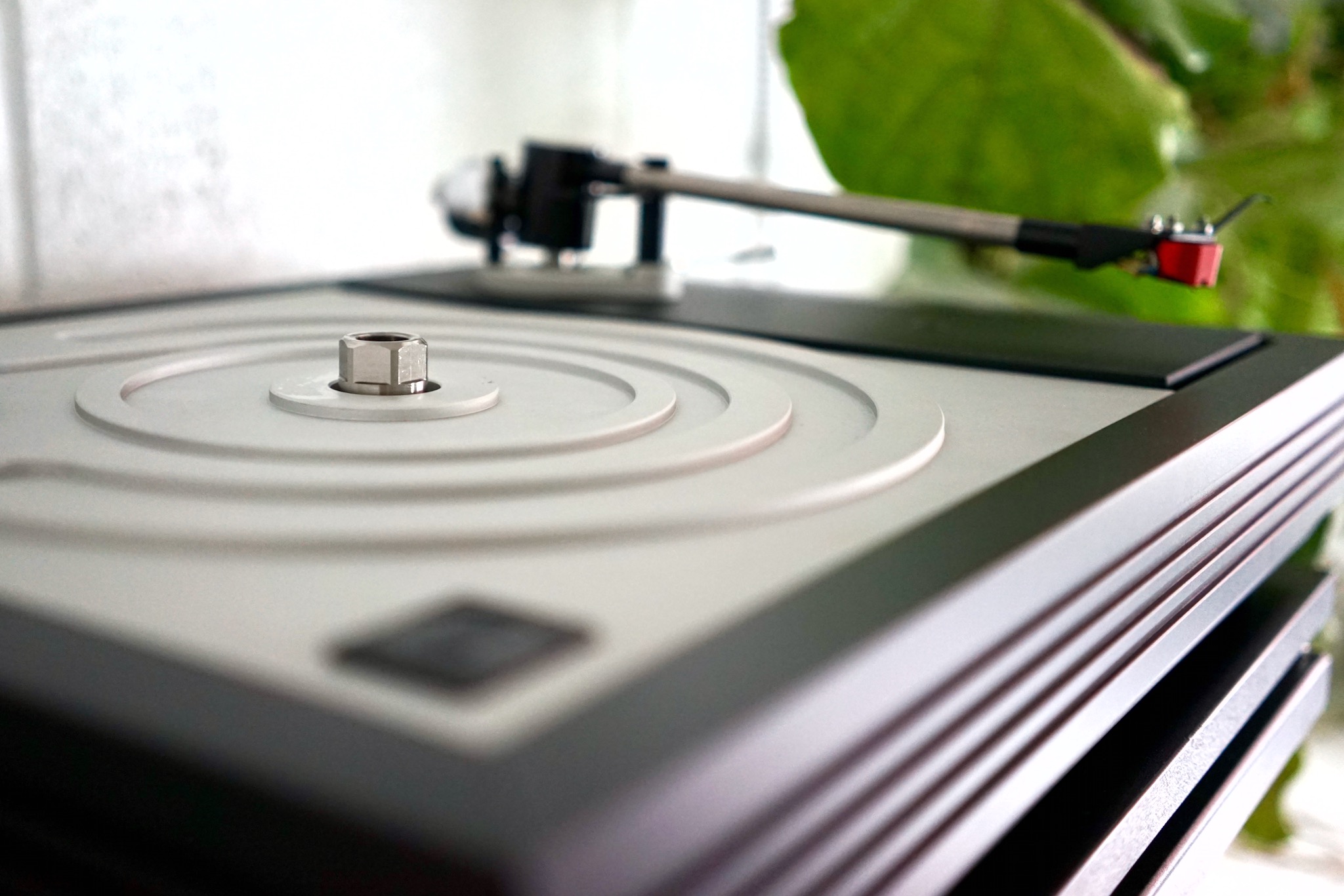 I’ve covered the nitty gritty in my previous post on the Karousel: what it is, how it’s different (and not) from the Cirkus it replaces, its dimensions, how to install it. In this post, I’ll add a bit more information I’ve learned in the meantime and then jump straight into praising this bearing — which I didn’t expect to make any difference but ended up sort of blowing my mind…

This is such a teaser. It really isn’t much.

First, it’s worth pointing out that in my last post I showed that the Karousel works just fine with the third-party Mober subchassis, which I don’t think was generally known. The Mober is still my top pick for an LP12 subchassis, so this is good news. (Soon I’ll be receiving an AudioFlat RubiKon subchassis to try out, which I’m very excited about — stay tuned! Maybe that will unseat the Mober??)

I have subsequently tried the Karousel with Linn’s own Kore subchassis, which I also own, and which I like quite a bit less than the Mober. (This is proof that I am not always totally superficial, because the Kore looks a lot better than the Mober to my eye.) It should surprise no one to learn that the Karousel is also perfectly compatible with the Kore 🙂

My friend Mark/YNWaN has also learned two things of note after inspecting a Karousel sent to him by AudioFlat member jimification:

Mark also notes that “the Karousel is nicely made” and “the main internal tolerances of the bearing are extremely good.” Very high praise from him.

But how does it sound?

Right, for the only part that really matters.

I was fully prepared to be totally unimpressed with the Karousel. I couldn’t see how it was meaningfully different from a Cirkus, I have a big beef with Linn, I had paid what I thought was too much money for it…

But it immediately impressed me.

I listened to what have become my current test tracks/sides.

From the first disc, Dolphy, I heard a difference. I was texting with Mark throughout this listening session. My first text was “Does sound pretty damned good. Bit more depth and resolution everywhere.”

Of Low’s C’Mon, I said said it didn’t seem to be at the level of “rediscovering my record collection,” but I noted better focus, and much more (and more enjoyable) bass — something I was not expecting.

With the M&K sampler on, I started to get excited. “It’s a big difference — much more bass, and it’s nice, clear, sharp. Everything higher up is clean and crisp too.” I had made detailed “before” notes the night before, and this definitely sounded significantly (say, 10%) better than before.

With Stop Making Sense on, I wrote “Wow. Bass impact, zing from acoustic guitar, space, all excellent.” “Annoyingly,” I wrote, “I think the Karousel really is good.”

I was similarly impressed with the rest of my test discs. Pentangle and Stay Awake: “Slam and impact of bass, amount of bass, texture, spatial presentation, all significantly improved.” Stuff Like That There: “attack of strummed guitars and soundstage — both pretty amazing. Improvements on everything so far, quite fundamental.”

This impression has held up in subsequent listening. The Karousel — replacing an almost brand new Cirkus and with a Tiger Paw Tranquility, a combination I thought couldn’t be bested — made a fundamental improvement to my system.

In a thread on AudioFlat, I offered this description:

The first thing I noticed was more bass. Not in an overwhelming or congested way — not in a way that made me think I needed to readjust VTA, for example. At first I wondered, “Has the Karousel reintroduced the bass bloom that the Tranquility removed?” But that’s not it. There was more bass, but the bass was clean and tight, and bass lines were not only louder but also clearer. Everything else was cleaner and tighter, too. I’d say that the Karousel profile is “clean, clear, and lively with more and tighter bass.” More detail, better snap, better texture, and definitely better soundstaging.

Stop Making Sense starts with a big, huge drum beat: it had way more impact and slam than before, and the vocals were much more clearly presented in the soundstage, which was huge. Pentangle is a texture-fest, with bowed bass, acoustic guitars, beautifully recorded drums, and three excellent singers often all going at once. It sounded epic, especially the acoustic guitars and the drums, which were incredibly lively and full of force.

All in all, I’d say the Karousel made a 10% improvement over my previous setup. So a massive difference and huge improvement. Not since getting the Ryan Sound Lab PSM-2 s into my “ZapSnaps” have I heard such a big leap in my system with a single change.

I hate to say it, but the Karousel is a game-changer.

This is just a bit off topic, but I may as well mention it here, because I’m not sure where else to put it.

Right after making the above notes, I swapped the Mober subchassis for my Kore, wondering if it would sound even better with the Karousel. It didn’t. The Mober and the Karousel clearly sounded better together.

I thought that the Kore might have brought a bit more clarity between instruments in the soundstage — but at the cost of significant loss of atmosphere, excitement, sharpness, and textural detail. Compared to the Mober, the Kore felt a bit “slushy.” Compared to the Kore, the Mober felt pure and fast.

As is often the case, I have been absurdly busy with projects and upgrades, and have gotten several months ahead of catching you all up on my blog. Things have calmed down a bit now, so I can finally write about all these changes. Coming next, a review of my Lingo 4, the story of how I rehoused it in an external box, and, speaking of “external,” the story of the external crossovers I built for my Yamaha NS-1000M speakers…

Sounds like the Karousel and Lingo 4 are a great upgrade. I have both awaiting installation (like you, I’m insanely busy right now).
Any chance of comparing the Mober subchassis with a Keel?

I definitely won’t be buying one — too much $$ and not compatible with my preferred tonearm, the Tiger Paw Javelin. I wouldn’t expect much of any difference, though. I tried out a Greenstreet (Keel clone) with an Aro over the summer, and though I didn’t have any other Aro-spaced subchassis to compare it with, my sense was that the Greenstreet and the Mober were doing about the same thing sound-wise. The Linn-spaced Greenstreet is the closest I could get to a Keel… I’d love to try one of those!

Building a third LP12 with an SME M2-9r tonearm, I will not be using the springs but Analogue Innovations rubber elastometers. That said, I was considering the Karousel but found a like new Cirkus, sub-platter and platter for a third what a Karousel costs. The market is now full of used Cirkus bearings some in like new condition.

Did you find any difference in SQ cwhen you applied the 3.5 Nm force to the sub chassis? I hate to reassemble the Karosel on my LP12 knowing you found no big difference or none at all…

hifiafreply
– In reply to: Alberto

I never did try with a torque wrench, but I very much doubt it would make much of a difference, if any (hence my lack of curiosity).

You mentioned that the original CIRKUS Bearing and the KAROUSEL Bearing appear to have identical internals. I also recall the massive improvement that you experienced earlier on, when you used the MOBER Stainless Sub-platter with the new CIRKUS Bearing. I’m thinking therefore, that the MOBER Stainless Sub-platter combined with the KAROUSEL Bearing might transport you to heaven. Tried it yet? Hoping you can share your findings.

A friend warned me that unless the alloys match perfectly, the Mober sub platter might wear the Karousel thrust plate unpredictably, versus the Karousel sub platter. Not wanting to damage my expensive Karousel, I haven’t dared try.