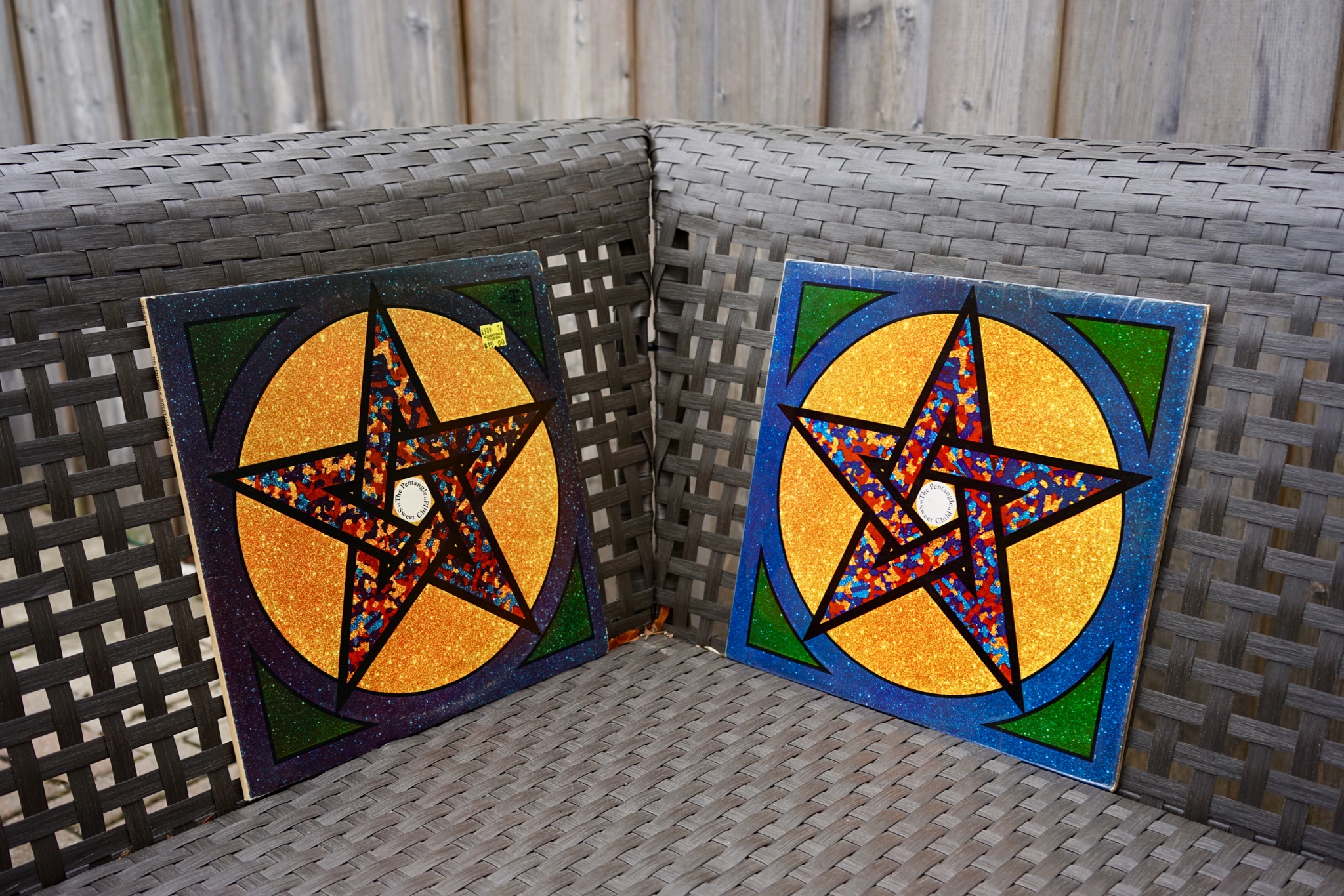 In this Best Pressing Shootout, I look at two copies of Pentangle’s 1968 classic Sweet Child.

Oh how I love this record. I might like it just a touch less than their self-titled début (with liner notes by a young John Peel) — but I definitely like it way more than any of the sort of meh albums they produced after this. I’ve already said everything I have to say about Pentangle in my lengthy Test Tracks, Test Albums post (I reread this recently, and I must say: not bad). So let’s get straight to…

This time last year, I did not have a single copy of this record, though I loved it dearly. Then I rediscovered vinyl and wanted all my favourite awesome-sounding discs on shiny plastic. First I ordered what was represented as a NM US first pressing by a seller on Discogs (I think it cost $15), but turned out to be a later-70s pressing in terrible shape. Next, when I was in New York last October I bought this early reprint at Academy Records on 17th, also for $15. It was actually in NM shape and sounded much, much better better.

There is one thing about all the US pressings of this disc that is just inexcusable. For reasons related to automatic turntable side-switching, which I totally don’t understand, the sides are arranged as follows: the first disc has sides 1 and 4, and the second disc has sides 2 and 3. For an album with a live disc and a studio disc (sides 1 & 2 were recorded live at the Royal Festival Hall, 3 & 4 are essentially just their second studio LP), this makes the record incredibly annoying to listen to: you really to have to swap the discs constantly. In Britain, clearly, so such stupid ideas were current: the Transatlantic disc is pressed in a normal way.

Anyway. When I was at Amoeba in LA in December, my brilliant partner spotted a Transatlantic first pressing of a later Pentangle record, Cruel Sister, on the late-60s purple labels — for $10 this time! That disc sounded so good that I knew I needed to track down Transatlantic first pressings of the two records I really liked. That was the end of the < $15 records. They were both fairly expensive, and both needed to be shipped from Europe at some expense.

The Transatlantic copy I ended up with was the very first pressing, with the flipback gatefold sleeve printed by Dawson Rossiter. You can see the flipback up there, just above the incredible photos of Bert (“I’m only in it for the beer,” which would be funny if hadn’t been true) and Jacqui. God I love these people. Actually, I can’t resist embedding a video of them doing their thing in their glory period. What a bunch of weirdo freak geniuses.

Anyway, here are the two covers side by side, one with flipback, one without.

Another thing worth mentioning is that the sleeve was designed by Peter Blake, who the previous year had designed another sleeve you may have seen before… Sgt. Pepper. Clearly, Sweet Child is not at that level of tour-de-force (what else is? Maybe Unknown Pleasures), and I think the cover itself is pretty ugly, really, but the inside it pretty fun and playful, and the back is really quite cool.

Every track gets a little icon and a brief write-up. The cover of Mingus’s “Goodbye Pork Pie Hat” gets a photo of Lester Young, to whom Mingus dedicated that track. (Another reason I love these guys is that they are obsessed with Mingus — two Mingus covers on the first side!!!!) “No Exit” gets a No Exit sign — which is exactly how translators came up with the correct translation of Sartre’s title Huis clos: it’s the sign they put up on streets in France where in English-speaking countries you’d write No Exit.

As you’ll have noticed in all the above photos, the sleeve for the UK pressing — which is always on the right — is much, much nicer than the US pressing. The colours are more vivid, it’s laminated (even if the lamination is peeling a bit), and it’s on thicker stock.

My digital comparator is the remastered CD-quality transfer on Tidal. (This version has the advantage of lots of really excellent tracks that didn’t fit on the LP, most notably “Travelling Song.”)

Well, it was worth the effort and the extra money. The UK first pressing on Transatlantic is stunning. The Reprise is not bad by any means, but the Transatlantic is better in every respect. Both pressings had a big edge on the (excellent) digital transfer in terms of clarity and texture. But compared to the Reprise, the Transatlantic was much richer and fuller. It’s just a thrilling pressing. Definitely skip the Reprise and wait for a Transatlantic to come along. (I’d be interested to hear a later reissue from ’69 or ’70. I bet they sound amazing, too.)

One strange note. While doing the second-to-second tests, I noticed that the digital seemed to be getting ahead of the vinyl — actually going a little faster. I listened to the whole side, and by the end, the digital was several seconds ahead of the vinyl. I paid particular attention to that because I’d noticed “Bruton Town” was sounding a little slow and plodding on Side 2. So I wondered if the Mober was maybe not holding the correct speed. I got out the True Note and RPM apps on my phone, which are probably not 100% accurate but would get me in the ballpark. Both showed the Mober locked in at exactly 33.3rpm. So what probably happened is that in remastering, the album was sped up a bit, probably because it was played too slow when the disc was cut. In the meantime, I can always just set the Mober to 33.6 🙂

1970 Reprise. “Three Dances” is not my fave song on this disc nor do I particularly like the trad-folk aspect of Pentangle, which later became basically their whole thing. I like the weird jazz-folk hybrids, myself. Anyway, these openers are cute but I don’t actually dig them, you know. Sound-wise, I can imagine John’s guitar (that’s an electric guitar, I think: probably an ES-335) being a little clearer and the xylophones a bit sharper and more present. The third of the three dances, “The Earl of Salisbury,” seems a little better recorded: the xylophone is much more percussive and nice here. Okay, things get much better with “Wach the Stars,” musically and sonically: some bass to fill things out, some hand drums, and Jacqui’s gorgeous voice, give me something to focus on and enjoy. Good presentation, but nothing exceptional. Very nice reverb and sense of space on “So Early in the Spring,” but some pre-echo kind of ruins the effect: you can hear Jacqui singing the next line and the current line at the same time. Not a good look. “No Exit” is much more my kind of Pentangle song: incredible guitar work, nice haunting vibe. Some good springy acoustic guitar on the right channel; John is again playing his ES-335 and the tone knob is turned down, so not much in the way of dynamics. “This Time Has Come” is the song I’ve been waiting for. Definitely should be a stunning track: lots of acoustic instruments, including upright bass and some stunning snare-heavy drumming. Not blown away here, though: it sounds good; but I’m not having an experience. The cymbal near the end of the song is a little clangy, hard. “Bruton Town” is another favourite: not quite as funky as on the self-titled album, but enough jazz drumming and bass to keep me interested. Pretty flat here, though. Boringly slow performance here, huh? Time to experiment with the Mober and get it up to 33.6! Haha, that does sound better!

1968 Transatlantic. Clearly more dynamic, detailed even before the music starts. The electric guitar sounds quite different — absolutely exactly as if the tone control were turned up. Wow. Very noticeable for a guitar nerd like me. The xylophone is much clearer and punchier. Yes, some definite thrills here. Also, you can clearly hear the recording equipment running in the left channel. Win some, lose some :/ Incredible impact and heft on the xylophones in “The Earl of Salisbury.” Even the (loud) applause is a little smoother here… “Watch the Stars” is totally lovely: oh wow, John’s delicate voice and Jacqui’s together, and the smooth bass and palpable hand drums… REALLY nice. Unbelievable solo (more from a musical perspective). “So Early in the Spring” has pre-echo, but it’s quieter. Not a particularly nice-sounding track: just a voice, quite clear, but with that slight pre-echo and some surface noise. Next, please. “No Exit” is more like it: guitars much clearer here and in clearer focus, particularly Bert’s (he must be playing through some kind of electric pickup, though: doesn’t really sound like him, or an acoustic). “The Time Has Come” is much, much better here: highlights are the uber-clear snare and John’s clear, lively ES-335. “Bruton Town” is a little woofy — not quite the treat for the ears that some of the other track have been.

Since I’m getting the sense that the studio sides (3&4) will probably sound a little better, let’s do the direct comparisons over there…

“I Loved a Lass” and “Three Part Thing”

Full digital. “Lass” sounds really, really good. Wow. Crisp, springy, lovely, with a wide and pleasant soundstage. Bass is deep, drums clear, guitar sweet (especially on right channel). This probably sounds better than anything I just listened to on vinyl — but I’m going to go ahead and guess that’s because this studio disc is better recorded than the live side. “Three Part” is great too: texture of the bowed bass and the heft and clarity of the guitars, especially the one on the right (I’m going guess it’s Bert’s). Definitely exciting stuff from an audio perspective. This is the best digital file I’ve heard in a long time. Probably should have just focused on the studio sides for this BPS. Oh well.

S-2-s digital vs. 1968 Transatlantic. Okay, vinyl sounds goooood going into “Lass.” And we start. YoWWzer this sounds incredible. Really, really, really nice on digital. But just that bit richer, fuller, livelier on vinyl. Bert — it’s like he’s right in my head (I want him there!). The differences are precision, tone, and balance (digital is darker overall, but without the same impact of the bass). ASTOUNDING on vinyl. Bert’s voice has such presence, and god, those drums — amazing on vinyl, and so much clearer than on digital. 25% better on vinyl, despite being excellent on both. As you’d expect, “Three Part Thing” is much the same: the textures are even clearer and more palpable, it goes a little deeper, the guitars are crisper and livelier. There’s quite a lot of “bloat” on digital that just clears completely up on vinyl. Clarity, clarity, clarity: that’s the vinyl rig with the Mober. Though you need a good recording and pressing to pull it out. This is a good recording and a brilliant pressing!

S-2-s digital vs. 1970 Reprise. This one also sounds good going into “Lass”… Tough call here. A little cleaner, livelier on vinyl, fuller on digital. But the clarity of vinyl carries it. Not as good as the Transatlantic, not as rich, leaner and narrower — but still really clean. Biggest difference is on Bert’s voice, which is much clearer and more present on vinyl. 15% better than digital. Same story on “Three Part Thing”: brighter on vinyl, fuller on digital, but much more clarity and better textures on vinyl. 15% better on vinyl.