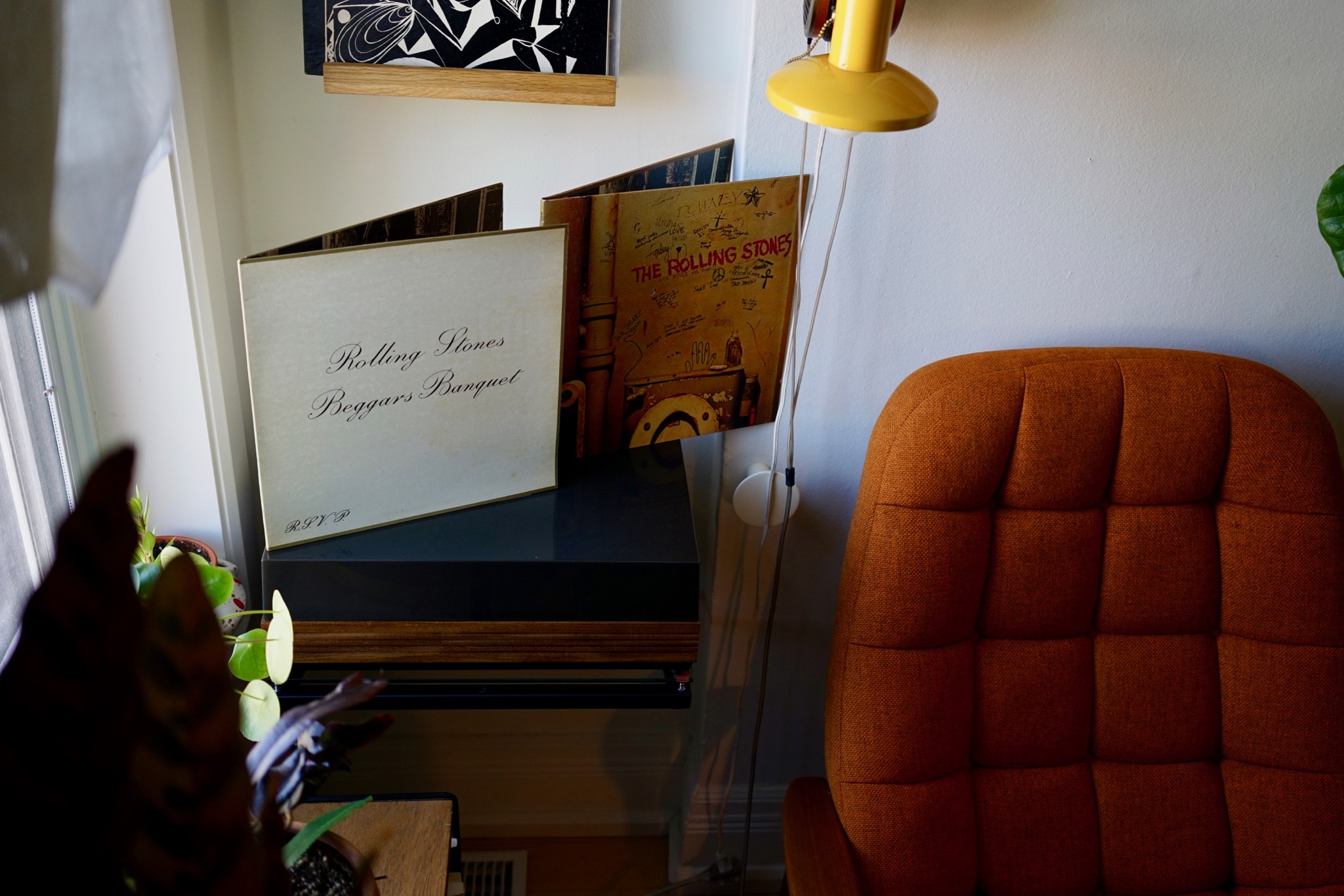 I came to The Rolling Stones fairly late. In the early 2000s, while I was an undergraduate student in London, Ontario, I ran out of indie rock to listen to and so started going backward: finding out about the Fall via Pavement, about Gang of Four via the Rapture, about Joy Division via Interpol (okay, that’s not true: I knew about Joy Division. But I did get pretty obsessed with JD in Interpol’s heyday).

I also went further back, though I can’t remember why, exactly. I listened to a lot of Neil Young and Joni Mitchell — and a lot of Rolling Stones. (You know, I think it might have been the Royal Tenenbaums soundtrack that got me excited about the early Stones… “She Smiles Sweetly” and “Ruby Tuesday.”)

Since that was also when I started collecting vinyl, I wanted to get the Stones stuff. My parents only had one disc: a beat up copy of Sticky Fingers, which is still my favourite Stones disc, and obviously one of the great album covers of all time. Around that time, the Stones were being reissued in “DSD”-remastered versions. They came on heavy vinyl; they were what I saw in the record store when I went to look for them; and they’re what I bought — most of the big studio albums of the 60s.

Later, while I was living in Toronto and going to grad school, someone clearly much cooler than me was looking through my record shelves and made fun of me for having all these lame remastered discs in my collection. “You could get an all-analog 70s pressing for like $2. Why waste $20 on one of these stupid digital remasters?”

It’s a criticism that has stuck with me. Looking up the early-2000s DSD remasters on Discogs and Steve Hoffman, I can see that they’re not particularly praised, with people generally following the line of thinking of the cool dude quoted above. People like UK first pressings or, in a pinch, all-analog reissues.

Well, I still have all my DSD discs, and I recently picked up of those cheap 70s AAA pressings (it was more like $20, actually).

It’s time to put this question to rest.

That, there, is the 2003 DSD disc, which I probably bought in exactly 2003. It has a pre-vinyl-fetishization-era obsession with putting digital-related badges on the label, as you can see, and is making exactly zero effort to look like a first pressing. As you’ll see in the other photos, the 2003 reissue uses the rejected toilet cover rather than the bowderlized dinner invitation cover.

There’s my 70s UK Decca. I’m not sure exactly when it was pressed; I found a Discogs entry that matches my matrix numbers, but it doesn’t have a data attached. Fair guess is mid-70s, I’d think. It’s in NM visual shape and on not-particularly-heavy vinyl.

My digital comparator is the Tidal 50th Anniversary transfer, which is 24/192 MQA.

This was only my second BPS with the Mober DC unit installed, and let me tell you, music is sounding very good coming out of my turntable right now. But one of these two discs clearly sounded better than the other.

Indeed, this disc is flat down one of the nicest I’ve heard on my system. It is breathtakingly dynamic and clear — an astounding aural experience. The 70s pressing is also very good, and also better than the MQA 24/192 digital transfer I compared them both to, but it’s a little thinner than the DSD and lacking some of its incredible clarity and finesse.

Although this is another big win for vinyl replay (and for every bit of my vinyl replay system, especially the recently added Mober DC kit), it’s also a reminder not to get too dogmatic in your anti-digital biases. Whatever digital equipment was used to produce this DSD pressing was obviously astoundingly good. Although this disc has a digital source, it’s one of the very best discs I’ve heard on vinyl.

Also, these DSD discs are really common and quite cheap and fetch no premium on sites like Discogs. Go snap ’em up.

2003 DSD. Wow. From the first notes, a real treat for ears. Amazingly lifelike hand drums at the start of “Sympathy for the Devil” and percussion throughout. I’ve had this pressing for years and years and listened to it quite intently in the early rounds of the LP12MF, but I’ve definitely never heard it sounding as insanely good as it’s sounding right now, with the Mober DC kit (and the other components that it seems to have brought to life). Definitely a VERY GOOD pressing. One that continues to reveal more and more with really good replay equipment. Oh, wow, the acoustic guitar at the start of “No Expectations”: just beautiful.  And the electric bass when it comes in in the chorus. One of my favourite medium-aware lyrics in rock history: “Our love is like our music: it’s here and then it’s gone.” Sweet Lord, this pressing — and this vinyl setup — is/are just blowing my mind. I’ve never heard music like this… “Dear Doctor” is not my fave track on the album, but things sound terrific: the barroom piano, the harmonica, the acoustic guitar: all so sharply defined in space and so totally alive. “Parachute Woman” seems to have a deliberately rough, less dynamic production. But the contrast between the sharp and lively acoustic guitar on the right and the muffled, dead kick drum and electric guitar on the left is pretty stark and definitely nicely emphasized in this incredible presentation. Oh my god, when the harmonica jumps out of the left side near the end it is an actual shock — and clarion clear. “Jigsaw Puzzle,” my partner’s favourite Stones track for some reason, is back to the super-dynamic aural space of the earlier tracks. Incredibly well-rendered acoustic guitar and electric bass — texture and thomp. It might suffer just a touch from its position in the inner groove.

70s Decca UK. Still dynamic, but much less clear. Hard and distant in comparison to the ridiculously vibrant, crystal-clear DSD. The super-treble-boosted solo on “Sympathy” definitely cuts through on this pressing, though, that’s for sure! Now I’ve forgotten exactly what the DSD sounded like and am deeply digging the sound of this pressing. I’m pretty sure it’s not as good as the DSD — less rich, I think, thinner, a little behind in snap and texture — but yeah, “No Expectations” on this pressing, on this vinyl setup, still sounds pretty astounding. “Dear Doctor”: a bit of flatness and edge to everything, a bit of distortion even on the vocals? I’m sure this isn’t as good as the DSD. “Jigsaw Puzzle” has a lot less energy and bounce. Also, some sibilance issues on Mick’s voice, probably damage from one of its previous owners’ misaligned cartridge…

Full digital. This does sound pretty good. The soundstage sounds oddly hard-panned. Bass seems a little bloated. But the acoustic guitar is nice and sharp. I wouldn’t be surprised if this was better than the 70s pressing.

S-2-s vs. 70s. Nope, way more life, detail, presence on the vinyl, especially on the acoustic guitar. Mick’s voice is smoother on digital, but lacking in presence. Bass is punchier, better defined, cleared on vinyl. Vinyl is a good 15-20% better than digital. Texture and clarity — that’s where vinyl wins, and not by a narrow measure. The digital has a little more quantity of bass, but it’s out of focus.

S-2-s vs DSD. Oh boy. I need a cigarette. The DSD sounds so good. Full and rich — much richer than the 70s. It has all the bass of the digital. But the level of detail is astounding: I can hear the acoustic guitar, I can hear every string, and the pick and the fretting fingers — and then also what’s behind the guitar, and what’s behind that, all in perfect focus. And the authority of the presentation: so full and assured: incredible. 35% better? 40%? The digital sounds really nice but this is a complete, total annihilation. Astoundingly good.

In additional to being really impressed with my vinyl replay system, and with this pressing: DSD must be pretty good too, huh?