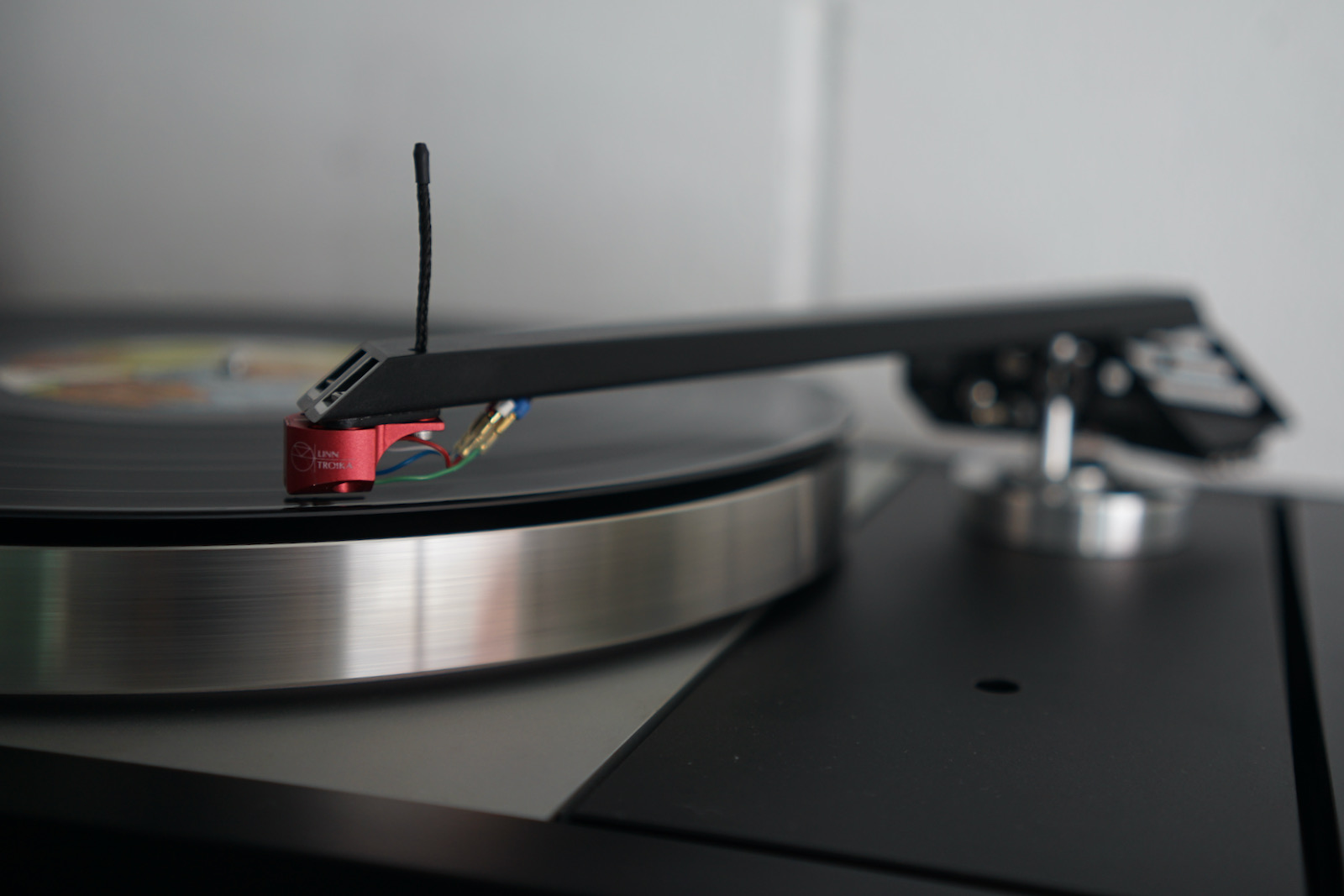 This past summer, my world was rocked by the Supatrac Blackbird tonearm — a brilliant original design that bettered my beloved Tiger Paw Javelin.

Back then, I described the Blackbird’s sound as robust, full, rich, and “embarrassingly intimate” — the rendering so lifelike that you felt a bit like you were violating the performer’s privacy.

And that’s how it continued to strike me for the next six months. A constant delight, it never got old.

I was an early adopter of the Blackbird. A very early adopter: mine was serial number 002, meaning I was the second person on earth beside the designer to give it a shot.

But, as you might expect, there were a few wrinkles to iron out.

Since last summer, I’ve had two more Blackbirds in my system: the first basically the same but with wiring customized for my needs — and the second updated with some significant changes.

And so I’m back with another post to describe the differences in the current-production Blackbird — and an update on how it sounds.

Richard has made a bunch of small updates to the current Blackbird, many of them based on my feedback. For example, the logos are now glossy black rather than white — subtle and beautiful, in my opinion.

The adjusting screws (spools) for the hoists now have Allen sockets and are easier to turn — and the hoists themselves are black to match the arm, rather than the yellow of the previous version. The cutouts on the rear of the thrust cage now have horizontal slots rather than circles. The thrust box is now powder coated; whereas the previous one showed rust after a couple of months, this one won’t rust — and also just generally looks neater and more professional.

But there’s one big change: the pivot is now magnetic.

This is to address an issue I noticed with my original Blackbird. As the arm moved across the record surface, the azimuth (or “lean”) would vary slightly. Although it wasn’t visible to the naked eye, with a bubble level on the arm you could see the arm progressively tilt very slightly inward. It was subtle but observable, and no amount of fiddling with setup could get rid of it.

Richard’s solution was to make the pivot bolt magnetic. This was so that no angle on the hoists would be necessary to create contact between pivot and thrust box. If the two were attracted to one another, the hoists could hang perfectly vertically, thus solving the tilting issue.

Above you can see the original pivot bolt, made of non-magnetic stainless steel. Below it is the new magnetic pivot bolt, which has a paramagnetic HSS tool steel tip. There is also a small silver magnet attached to it, so that you can vary the amount of magnetism at the pivot point by swapping or reorienting this detachable magnet.

Above you can see the new pivot in action (well, sort of — this is all pretty hard to photograph, and also to explain; I suggest watching my video on the Blackbird to get a sense of how it works and how this new pivot affects this).

Setup for this revised Blackbird was just like for the original version (see here), but with one difference. Richard’s advice with the new pivot was to remove the detachable magnet from the pivot and get it so that the thrust box just touched the pivot when hanging freely, and only then to engage the magnet.

That’s what I did. And then the magnetic pivot did its job. Set up this way, I was not able to detect any azimuth variation across the record surface.

I gave my ears a nice long rest from the original Blackbird before trying this latest version. In late December, I removed the previous Blackbird and installed a Linn Ittok in its place, which I listened to for a full month.

The Ittok is of course a very different beast from the Blackbird, but I enjoyed my month with it. It’s a really fun arm with a really distinctive voice: super-punchy bass, slightly splashy treble, with an engaging, euphonic presentation.

Audio memory being what it is, there were definitely times during my month with the Ittok that I started to wonder whether it was perhaps just as good as the Blackbird, and if I’d be disappointed with the Blackbird when it was back in my system.

Well, having gotten the new Blackbird in the system — I can tell you that was definitely NOT the case! The Blackbird remains a bit of a miracle. Much as I enjoyed the Ittok, it’s just not in the same league.

Hearing the Blackbird again after a month with the Ittok was exactly like experiencing it for the first time — or maybe better.

Which is to say, it was a shocking, staggering, life-affirming experience.

The first thing I noticed was the smoother top end of the Blackbird compared with the Ittok: it was capable of singing without stinging, in the way the Ittok sometimes would. Trumpets could be grating with the Ittok — with the Blackbird, they were still sharp, but not harsh.

The presentation was again robust, intimate, and natural. The Ittok had a bit of a “Kodachrome” presentation: it could exaggerate colours in a pleasing and euphonic but not always very realistic way. The soundstage was like a stage lit by a few spotlights: you’d have the drums over here and the acoustic guitar over there and the voice in the centre, but not much atmosphere between them. With the Blackbird, I got the whole picture. It was still euphonic and rich, but was unquestionably conveying more information. It’s a high-bandwidth tonearm: everything is in such clear focus that there’s no need for any blurring.

Is the new Blackbird better than ever?

There is no question that this new Blackbird sounds much better than my Ittok.

The only question is whether it sounds better than my previous Blackbird — a.k.a, the best-sounding tonearm I’ve ever had in my system.

Audio memory again being what it is, it’s difficult to say for sure.

But my strong sense is yes.

Since I got the new Blackbird installed three weeks ago, I’ve been listening to my usual “reference discs” as well as to discs I haven’t heard in a while. All sound at least as good as with the previous Blackbird.

But — and this is the main evidence I see that the new Blackbird does sound better than the original — I’m able to differentiate in new ways between great-sounding discs that I previously heard as being equal.

For instance, I’d always thought that Bob Dylan’s Shadows in the Night sounded great — but I’ve never heard it like this, absolutely humming with life, Bob’s voice a focused hive of electricity, the bowed bass setting off sympathetic vibrations through my whole body. It was no more thrilling to me than Rough and Rowdy Ways when I listened to it in the summer and fall with the original Blackbird. But with the new Blackbird, Shadows in the Night sounds obviously better than this other disc — it’s in another league.

My fancy Kevin Gray remaster of Joni Mitchell’s Blue has never sounded this good — up against the Bernie Grundman remaster, which was pretty close over the summer, it is now shockingly, head-shakingly excellent.

I hadn’t listened to Yo La Tengo’s And Then Nothing Turned Itself Inside Out in a while… but I guarantee I have never heard it sound anything like this — a whole inviting audio landscape that I snuggled myself right into.

The other evidence that my system is sounding better than ever are the responses of the two friends I’ve had over for regular listening sessions (when Covid-permitted!) over the last several months. Both thought the system sounded better than ever. One, like me, thought the difference was big.

So I think this arm sounds better than the previous Blackbird. My friends agree.

The setup on the two arms was identical, as far as I can tell, aside from the angle of the hoists. But perhaps some tiny change explains the difference — and I did notice that this new Blackbird seems more sensitive to cartridge setup, so maybe I just nailed the VTA or something.

I haven’t changed any aspect of my setup since December, when I last heard the original Blackbird — but maybe some interactions of this new arm and other aspect of the setup can explain the differences I’m hearing.

Whatever the precise cause of the sonic glory of my current setup, the new Blackbird is at least a part of this new hifi reality. And based on what my ears and my brain are reporting, I’m convinced it’s a crucial — even the crucial — element.

So I am very much re-convinced of the sheer magic of the Blackbird. I can’t say for sure whether this new version with the magnetic pivot bolt sounds better — but it seems to, and it definitely doesn’t sound worse.

And if it does sound better, that makes good sense, because this new version effectively addresses the one issue I was able to notice with the previous iteration, the inconsistent azimuth.

The good news is that all these fine distinctions are sort of beside the point. The original Blackbird is no longer; this is the current Blackbird. And in its current incarnation, it is unquestionably the best tonearm I’ve ever heard. I would absolutely not be without mine.

A good analogue-sourced hifi system is really a form of magic. It’s genuinely mind-boggling that sound can be recorded and reproduced with such fidelity. I’m shocked every day at how good my system sounds, and grateful for all the pieces that interact to make it sing.

Hi Adam.
I have number 5 at 10.5 inches and number 23 at 12 inches. I ran the first arm for months and loved it despite the “wandering” azimuth. I can measure crosstalk using the Adjust+ program from Dr Feikert. The new arrangement provides solid azimuth. I have a Stanton 881s mounted on the 12″ it sounds fantastic, and acheives over 40db channel separation which I believe is, in part, enabled by the arm design. There’s no going back to a gimbaled arm for me.

Great to get some measured confirmation of the success of the magnetic pivot! Thanks for sharing — and glad to know I’m not the only one enjoying this arm!

Hi there,
Your blog is really great very informative.I am new to vinyl and looking at getting a 2yr old LP12 Majik level. Where is the best upgrade to go for first, best bang for buck in your opinion. Thanks for the help.
Sean

hifiafreply
– In reply to: Sean Flynn

Thanks, Sean! I’d say that I got the most bang-for-buck from motor/PSU changes (Mober DC or Lingo 4), followed by bearing (Karousel), followed by tonearm (Blackbird). Cartridge also makes a big difference. But a TT is a system, so every bit matters, and the ways they will interact with your particular TT is hard to predict. It takes a lot of care, attention, trial and error!

Hey Adam: Any new activities? Haven’t heard much out of your blog for some time! 🙂

Too much! I’m in a situation where there’s such a backlog of things to report on that I barely know where to start! But soon I’ll finally write about my mono setup, which continued to blow my mind, and which I think I’ve finally got all sorted. That post will be called “Onward to Mono” or something similar 🙂