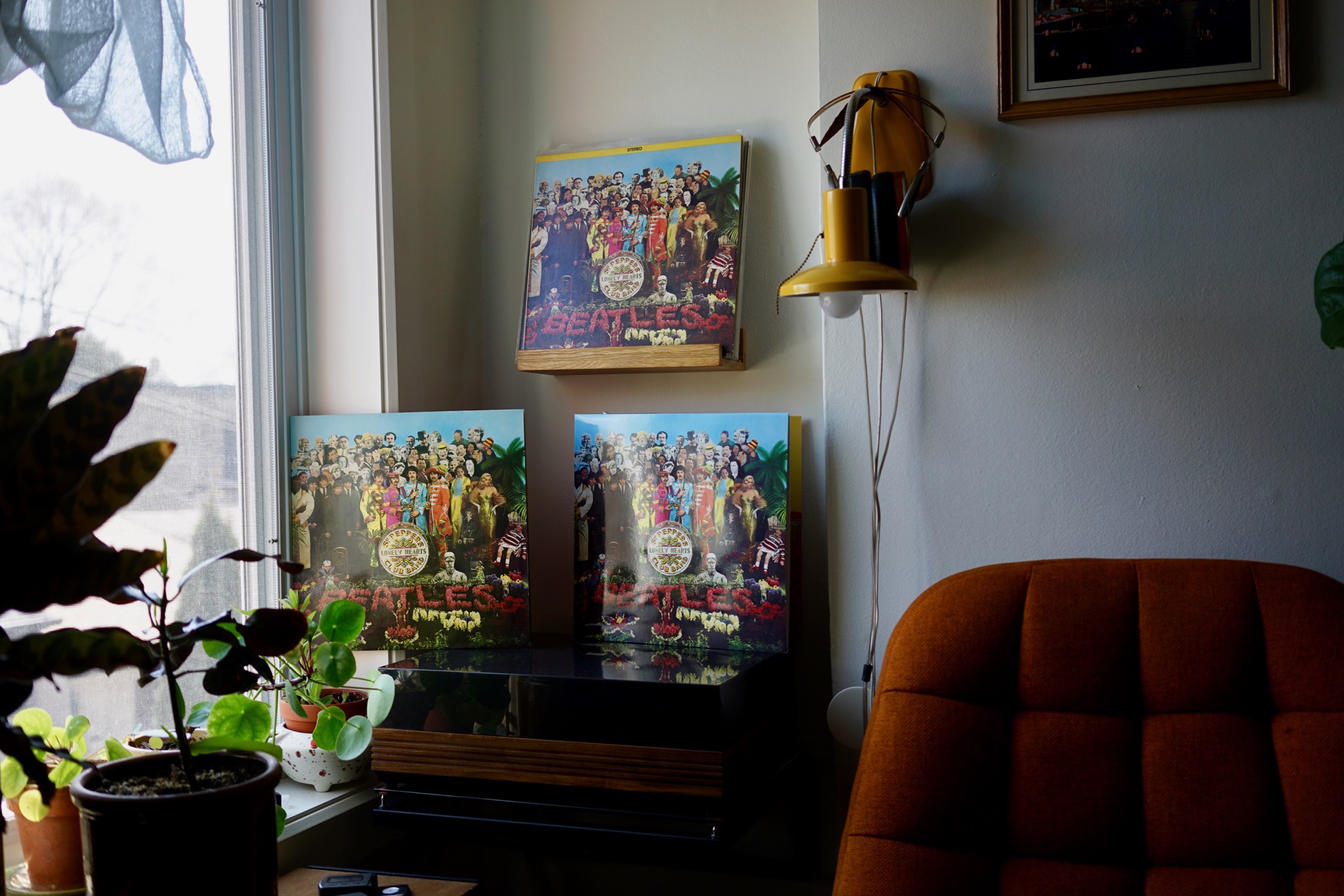 Let me apologize in advance for what is an overly complicated, utterly indecisive shootout.

Burdened, like so many Beatles fans, which a bunch of Pepper pressings, I wanted to know which of them sounded best. Instead, I found that they all sound okay, and quite different — but, shockingly, none sound quite as good as the digital comparator. If you’re looking for definitive answers — or for any reinforcement of your love of music on vinyl — I’m afraid you’ll have to look elsewhere..

Lucky for you, when I revisited this shootout several months later with a better setup, I found a bit more clarity… See red text below.

Let’s talk about this one first: the vinyl pressing of the 2017 Giles Martin remix. As I mentioned in my Abbey Road shootout, I love the Giles Martin remixes — and this is the one I love the most. The huge bass sounds throughout, the crazy brass slam at the start of “Good Morning,” the stereo-pan swarmandel at the start of “Within You Without You” — I love the rich, muscular sound and all the little editing touches. Since I’m not a fan of mono, and the Beatles and their engineers put all their effort into the mono mix, it’s a true delight that Giles Martin put so much work into creating such a gorgeous stereo version of this album.

When I was getting into headphones and digital a few years ago, this was my #1 go-to ear-candy record. On the 24/96 hi-res rip of this album I had, the first tracks on Side 2 were particularly thrilling: the oboe at the start of “When I’m Sixty Four,” the aforementioned brass blast at the start of “Good Morning” — I would often put it on and revel in the this is awesome.

I didn’t buy the vinyl until a couple of months ago, and I haven’t found it as absolutely jaw-dropping as the digital version. It sounds good, but it definitely doesn’t stand out in my stack of great-sounding records. Which is a little strange, given how good the vinyl pressings of the other Giles Martin remixes sound…

This it my 1981 pressing from the all-analogue Blue Box, discussed in detail in my Rubber Soul shootout. Hard to know what to expect from it. Blue Box records sound really good — but this is the original stereo mix, which has always been supposed to sound bad. So a good pressing of a bad mix?

And this is the version I’ve had on my shelf for the last decade or so, a 1983 Canadian pressing in excellent shape that I’ve always enjoyed and probably paid about $5 for. This is probably also an all-analogue pressing, so I’d expect it to sound more or less like the Blue Box version — maybe a little worse, since it was pressed in Canada and I’m Canadian and Canadians are naturally diffident, especially when comparing themselves to anything British.

I compared these three vinyl pressings to two digital comparators, since there were two distinct mixes in play. The digital versions are a 24/96 rip of the Giles Martin remix and a 16/44 rip of the 2009 remaster, which is based on the same mix as the Blue Box and 1983 Canadian pressing.

This was the first of the “revisited” Best Pressing Shootout I did. I dragged my partner out to Sillys Place and we listened to “A Day in the Life” in three versions: Blue Box vinyl, 2017 Giles Martin remix vinyl, and Giles Martin digital (via Tidal Master and Gungnir Multibit). This time the results were a little clearer.

The Blue Box vinyl sounded pretty awful, really thin and sharp. The 2017 vinyl had way more bass, was much “thicker,” possibly somewhat exaggeratedly so — but everything was much clearer and more dynamic. Voices in particular stood out beautifully, and the drums had way more heft. The digital went on last. It sounded a lot like the vinyl, much better than the Blue Box vinyl, but a couple of steps behind the vinyl — less presence on the vocals, more glare and edge when things get a bit loud. A narrow but obvious win for the 2017 vinyl.

Oh God, how do I summarize this? Everyone loses?

I definitely prefer the Giles Martin mix over the original mix. There are a few little parts that sound better on the original mix — most notably, the pizzicato strings in the vocals-free interlude in “Within You Without You” — but on balance the Martin mix is much fuller and more exciting.

Strangely, though, it sounds better on digital in my system than in this vinyl incarnation. This is weird, since my digital setup usually sounds quite a bit worse than my vinyl setup. So the 2017 vinyl pressing sounds better than either of the 80s pressings, but not as good as the digital. An equivocal conclusion.

The Blue Box pressing generally sounds a little better than the 1983 pressing. Compared to the 2009 remaster, it sounds a tiny bit better, but nothing to get excited about.

So which one should you buy? Hmm…

If I had all to do all over, I’d probably get the Blue Box version as a faithful document of what the somewhat-lacking original mix sounded like — and stick to the digital version of the Giles Martin remix.

I actually didn’t make detailed listening notes on this, for some reason. So you’ll just have to go with my conclusions from up there ^^.

I might be the only person on earth whose favourite part of this album is the start of Side 2. Yes, “Within You Without You,” “When I’m Sixty Four” (the only cheesy Paul song I can stomach), “Lovely Rita,” and “Good Morning.” Go figure…

1983 Canadian. Minimal surface noise. Sounds really nice on “Within You” — lots of space and details. Might be a little thumpy on the bass, but the textures are excellent. Pizzicato string instruments and the drones on the left channel — both very very good. Bowed strings are beautiful, too. This is a great hifi workout test track. Oboe intro to “When I’m Sixty Four” is a little fuzzy — doesn’t quite tickle like it should. Everything is lacking just a bit of definition. Nice strong, round bass on “Lovely Rita,” with soaring vocals and surprising, vivid special effects. Sounds great. Breathing sounds are freaky, as they should be. “Good Morning” is pretty flat, unlike the tour-de-force of slam that the Giles Martin mix delivers… Guitar solo is nice and spiky, though. Nice, loud, forceful, rocking drums on the outro…

Blue Box. No surface noise. “Within You” sounds really excellent. I think George’s vocals are a bit more forward, clearer here. Detailed, bright, crisp, clear. Pizzicato part is notably excellent, as are the drones and the strings in that section. Really, really nice — my sense is quite a bit better than the 1983. Oboe intro is again a little underwhelming on “64.” The bell part is pretty good, the piano is relatively clear. I’m not picking up as much as the echo/reverb I was hearing on the 1983. “Rita” picks it up and sounds terrific. Bass might be a little less driving than on the 1983 but the details and the treble seems a little better defined. “Good Morning” sounds like it did on the 1983 — I’m used to the Giles Martin mix, I think, so this is a little boring… Drums sound great on the outro… probably a little treblier than the 1983.

Giles Martin. No surface noise. Nice swarmandel stereo pan to open “Within You,” a Giles Martin addition. No doubt this sounds better than the others — the hand drums (tablas?) are really forceful and clear. So good that I can’t be bothered to jot down more notes. That is the thick, lively oboe sound I’ve been waiting for on “64.” Really deep, visceral bass on this track. Cymbals are delicate and distinct on the left channel. Amazing and beautiful! Opening acoustics on “Rita” and gorgeous: precise, tactile. The vocals might soar a touch less, though, and the special effects are less goosebumpy, I think. “Good Morning” sounds like I like it to: full-on sonic assault. I think this is my favourite individual remix track. Turns a kind of boring song into “Helier Skelter.” Guitar solo not as spiky as on the analogue versions, though. You know, the drums on the outro might be a little flatter than on the analogue discs…

Full digital. Unsurprisingly, given that this was my go-to ear-candy album in my digital days, this sounds really good. There is a certain ear-sucking plumphy quality that’s moderately annoying and I don’t think exists on vinyl. But let’s do a direct comparison and see how they stack up.

S-2-s Giles Martin digital vs. vinyl. They sound very similar. The vinyl is a little softer and darker. I might prefer the digital here. Yeah, a little more detail on the digital, a little more clarity. The only edge for vinyl is the lack of that ear-sucking sound… Digital by 5%. But on “When I’m Sixty Four” I like vinyl better: heftier, better balanced, smoother. Vinyl by 5%. Stereo equipment is so weird.

Also weird: the bunch of names “Vera, Chuck, and Dave.”

S-2-s Blue Box vinyl vs. Giles Martin digital. Not a lot to like about the original mix. Buried, soft vocals. Ah, but the sitar textures come through more clearly on the vinyl here. Yeah, that “pizzicato” section is much nicer here than in digital. Different mix, obviously, but this can hold its own against the digital Giles Martin. Very different mix, with tablas and sitars but at the front and George’s vocals soft and a little buried. So a matter of choice. I still like the Martin, but have to call this a draw in terms of pure sound quality.

S-2-s Blue Box vs. 2009 Remaster. A bit more definition and detail on the pizzicato section on vinyl. Otherwise, these sound very similar. Maybe 5% better on vinyl? Just a little sharper on everything on the digital “64.” Let’s call this one a draw…

S-2-s 1983 vs. 2009 Remaster. Just a bit more definition on digital. The pizzicato section is clearer on digital. So let’s say a 10% advantage to digital here. But the sharpness differential disappears on “64” — they sound equally good. So 5% overall for digital. So a very narrow victory for the Blue Box over the 1983.