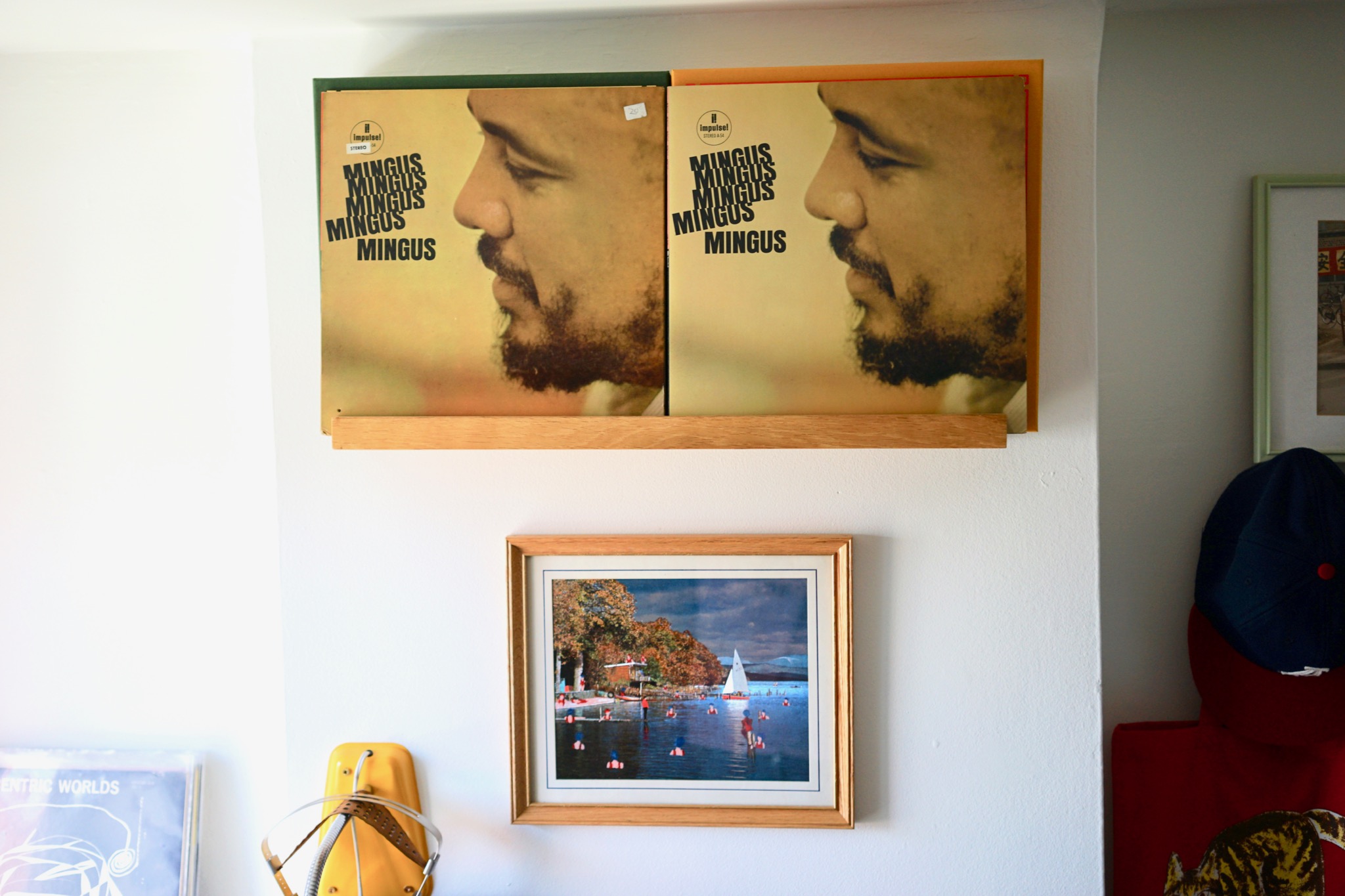 I revisited this many months later in a much better setup… and the results were overturned! Sorry, those of you who rushed out and purchased bargain Japanese pressings of this disc: the early US pressing is now much better on my system.

That, up there, is the first copy of this record I purchased, a 1968 ABC Impulse!. I got it for $40 at Academy Records on 17th Street in Manhattan in October, a pretty good deal. It’s in VG+ shape — a few little clicks and pops but nothing much to complain about. This is not a first pressing, but it is an early pressings, and it does have the Van Gelder mark, indicating a lineage to the original masters and metalwork. My friend Jared, whom I trust implicitly, told me that in his experience these later-60s ABC Impulse pressings sound just as good as the first pressings. Others online seem to agree.

And that up there is something much less exalted: a 1979 Japanese reissue. You’ll notice that the label, while very cool in my own opinion, is nothing like an Impulse! label — unlike my previously shot-out 1973 Japanese Black Saint. Indeed, it doesn’t even say Impulse! on it — and it isn’t pressed by the same company as the other Japanese Impulse. The 1973 disc is a Toshiba, this is a Victor. According to LJC, this is all because in 1979 ABC Impulse! was sold to MCA records, whose partner in Japan was Victor.

Perhaps because of the funny logo and the pressing-plant switcheroo, these later Japanese Impulse! records are very cheap. I got this for less than $10 in a large order I made from a seller in Japan (whose identity I will keep secret because his prices are so good and his tastes so in line with my own). I only bought it because it was so cheap and because adding it to my order didn’t increase the shipping fee. And because I thought a comparison with the 1968 pressing would be fun. So here we are.

There is no question about one thing: the MCA sleeve is crap. The 1968 record has a gorgeous, thick, laminated gatefold sleeve. It has a beautiful patina and wears its 50 year history with style and grace. The MCA Japan has no gatefold, its cardboard is flimsy, and its colours are off. The vinyl is thin, too. It feels like it cost $10. The ABC Impulse feels like it cost hundreds of dollars.

Although I do not speak Japanese or read any of Japan’s several alphabets, I did spot something funny in the Japanese liner notes.

Above, you see Nat Hentoff’s original notes in the 1968 pressing. If you look carefully, you’ll see that in his explanation of the first track’s title, “II B. S.,” Hentoff says that “B.S.” is to be interpreted according to its “common meaning,” a.k.a, “bullshit.” The Japanese translators (or original liner-noters, I have no idea) come to a different conclusion:

They gloss B.S. as “Bachelor of Science.” That would be much more respectable. But this is Charles Mingus. Also, it would be B.Sc. I hate to break it to you, Japanese Mingus fans of the late 1970s, but B.S. here means bullshit. No B.S.

My digital comparator is the only version I could find on Tidal, a CD-quality transfer.

On my massively excellent Sillys Place system, put together in the months since I first did this comparison, the US pressing stands out as exceptionally good, with amazing textures on the reed instruments and the bass, and incredible force, drive, and snap. The Japanese pressing just couldn’t keep up — it is clearly several steps behind. My headphone system wasn’t bad, but my current loudspeaker system is pretty incredible — and on this very, very nice system the US pressing is finally able to really shine. Hands down, 1968 US Impulse!

Well this one was a surprise. To me, anyway; readers of this site will have noticed by now that I like Japanese pressings.

Again, I don’t know what magic was happening in Japanese mastering facilities and pressing plants in the 1970s, but I do know that it was my kind of magic.

It will be hard to sell the ABC Impulse, though, if only for its gorgeous sleeve… A 1973 Japanese pressing would be a nice compromise, perhaps.

1968. Ambient details at the start are stunningly good. Amazingly palpable. Sorry, the Japanese pressing is not going to beat this. Insane splash on the cymbals, nutty authority on the deeper instruments. Cymbal splash, width, texture: this is a VERY GOOD pressing, audio thrills galore. Piano is very bright and lively — better than you’ll hear on any RVG album for instance. Ooh, but it’s the texture of the deep reed instruments (and the cymbals) that are really thrilling here. Oooh, that bass riff in the centre! And the trombones! AMAZING.

Japanese. INTERESTING. Also very good, but clearly lacking the detail and directness, the shimmer and snap of the US pressing. It is indeed bass-heavy, not in a good way. It drowns out textures, detail, snap. On this setup, this differences are very clear, and lean entirely in the other direction. Not even close. Like 15% better on the original US pressing.

ABC Impulse. A little bit of surface noise, but not bad… On “II B. S.,” great ambient sounds, lovely sense of space, then amazing texture on the brass when it kicks in — visceral and cordy. Drums are nicely detailed too. Sound is definitely very good on this pressing. Not in the top tier, but very good. On “I X Love,” again, wonderful space, clear sound, especially alto sax in the left channel. More of the same in “Celia” — I just love Mingus. So much effort has been put into, among many other things, making beautiful sounds — not just sounds that evoke particular emotions, but also that just feel good against the body. “Mood Indigo,” despite being on the inner grooves, sounds excellent (in fact, it’s probably there because it’s quieter — oh the good old days, when track order was dictated by the technical inefficiencies of LPs!)

MCA Japan. A little less surface noise. “II B. S.” starts with great ambient noises and then more of that great texture. Cymbals sound smooth and detailed. This is also a very good pressing. Maybe a little less dynamic — a little less high end, a little less focus in busier moments? The piano sounds crystal clear and the cymbals too, but the brass might just be slamming a little less hard. Same feel on “I X Love” and “Celia” — sounds great, but probably a little less dynamic than the ABC Impulse, with a little less extension and impact — though ambient sounds are great and cymbals sound really nice. Little “swoosh swoosh” on the pressing takes some of the fun out of “Mood Indigo.”

Full digital. This sounds good. Nice ambient details at the start. But it seems to get a little confused and grainy when things get faster and louder. Less of the visceral feeling of the ABC Impulse, I think…

S-2-s MCA Japan. Vinyl has more authority, heft, roundness. And bass — the balance on vinyl is definitely bass-weighted, in a nice way. Yeah, much nicer on vinyl. Digital sounds thin, plunky. Lacking detail and “beauty” — tiring and tinny compared to the round, detailed, full vinyl. Cymbals softer, wider on vinyl. Vinyl is 15% or so better here.

S-2-s ABC Impulse. Geez, these two sound a lot alike! Vinyl much brighter than MCA Japan. The digital and vinyl sound exactly the same here, totally alike to me. Weird. Okay, maybe I’m picking up on a little “pixel barf” — hardness, lack of smoothness — in the digital. But it’s minor, like 5%. Maybe there’s something wrong with me — but I again prefer the Japanese pressing. What the hell!

A bit more listening and comparing confirms it. This MCA Japan pressing sounds better to my ear. Go figure…