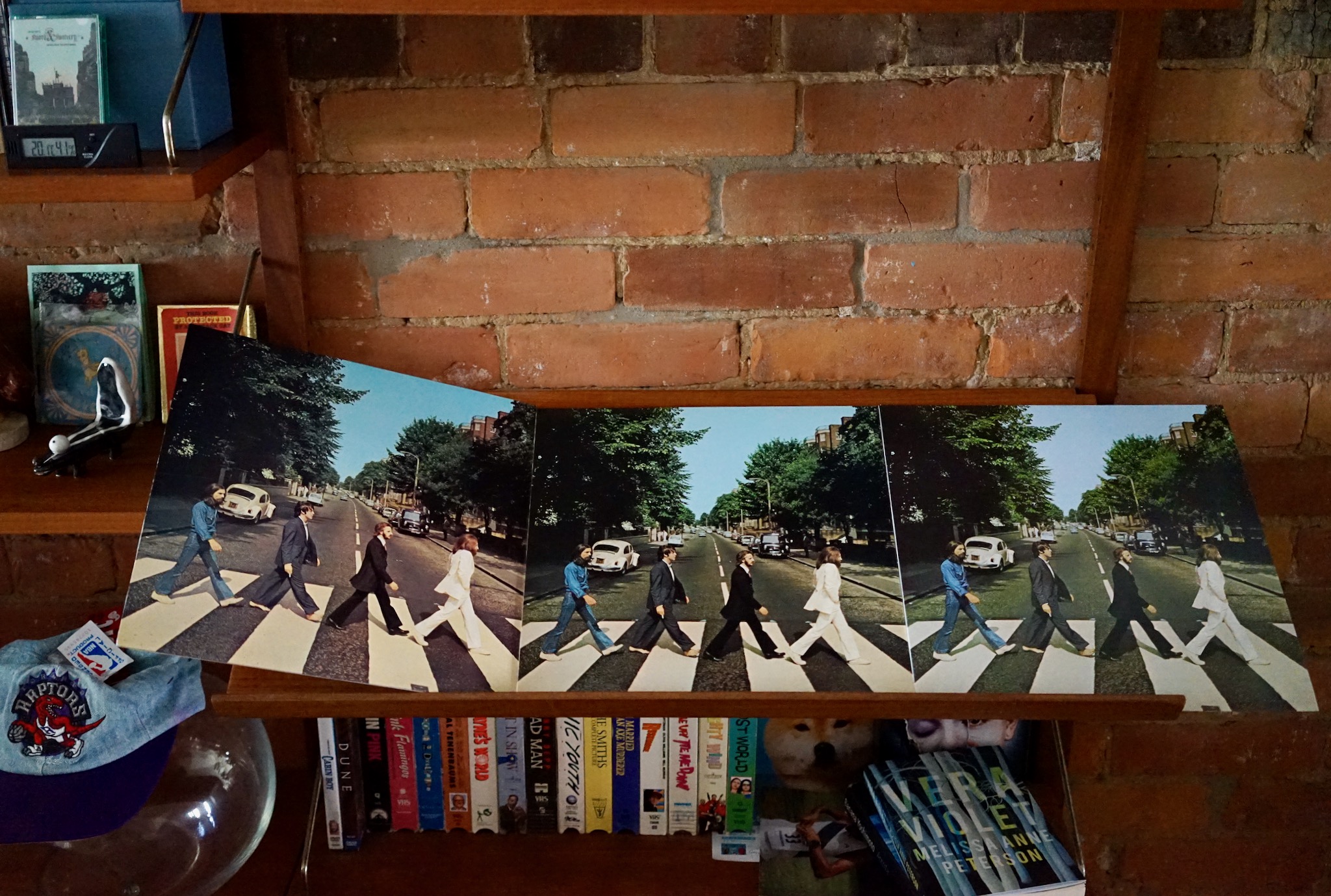 And now, in the third installment of the Best Pressing Shootout series, I move from the painfully obscure to the glaringly obvious.

I will say that I truly love the Beatles and I truly love this record. It’s not the perfect record that so many claim it is. I think “Maxwell’s Silver Hammer,” “Oh, Darling,” and “Octopus’s Garden” are pretty terrible songs, actually. I hate to say it, but I find “Something” pretty cheesy, too. But: “I Want You”! One of my faves. And then the medley on Side 2, probably my favourite thing the Beatles ever did, with the possible exception of the BBC sessions collected on Live at the BBC, Volume 1.

And although I think Paul’s songs on this record — and in the later years generally — are pretty horrible, I give him credit eternally for patching that medley together. Sometimes organizational chops trump songwriting ones.

This isn’t actually just a shootout of different pressings; far more variables are in play. One disc is the last all-analogue version of this record ever released. The second is a digital remaster pressed back onto vinyl. The third is a totally new mix.

Contestant #1 is from the famed BC-13 UK Blue Box (the closest individual pressing on Discogs I can find is this one, but I think it’s later than mine). If you don’t know about the Blue Box, you need to read up, now. It’s a box set containing every Beatles UK studio album (you’ll need to look elsewhere for the US-only Magical Mystery Tour LP), released in the late 70s and early-mid 80s. For the most part, these were bought by collectors who already owned all the records and left the Blue Box on the shelf, unopened and unplayed. One really exciting thing about these is that they were the last all-analogue pressings of the Beatles records. In the mid-80s, the catalogue was digitally remastered, and all subsequent vinyl pressings (besides the 2014 mono box, but I’m not a mono guy) were sourced from digital masters. The other really exciting thing is that these are still really cheap: I got mine for $300 CDN, which works out to about $20 per record. Considering I had none of these records in analogue versions, and that every record was in Near Mint condition, this was a bargain.

The Blue Box was released for many years, with many different labels. I haven’t been able to get a clear sense of whether the quality differs markedly across this span. People mostly think it doesn’t. The details of the labels suggest that my box was produced in 1981 or 1982. I’ll go with 1981, since that’s the year I was born.

But does all-analogue sound good? We shall see.

The second is a 2012 180g vinyl reissue pressed from the much-hyped 2009 remasters. I dutifully bought this shortly after it came out, drawn in by the hype. Ten years later, the counter-hype has set in. In the dark corners of the internet where pressings are discussed, it’s reputed to sound pretty bad. We shall see!

Finally, the recent 2019 Giles Martin remix. I’m a fan of his remixes: I absolutely love the Sgt. Pepper he did in 2017, which really brought that album to life for me, and was one of my go-to transfers back in my primarily-digital days. I’ve been very impressed with my 2018 Giles Martin remix White Album too, going so far as to give it the ultimate honour: inclusion as a test track in my LP12 Modification Frenzy. I gotta say, I’ve been less blown away by his Abbey Road, mostly because my copy has an annoying pressing error (a persistent “swish, swish” throughout the whole album) that always drives me crazy when I’m listening to it. This is especially grating and noticeable because the record is pressed so quietly. I’d like this disc more without the pressing error and with more volume. But I bet it sounds pretty good…!

For my digital comparison, I’m using the MQA version of the Giles Martin remix from Tidal. That does involve comparing different mixes with the 1981 and 2009 pressings. But I wanted to be consistent in my digital comparator, and I wanted to pick the best-sounding transfer.

There’s no clear winner here. There is, however, a very clear loser. The 2009 Remaster sounds horrible: dull, flat, soft, flabby. Send it to Siberia.

Both the Blue Box and the Giles Martin remix have their virtues. Both are very dynamic and alive and fun to listen to. The Giles Martin remix has a bit more heft, polish, and oomph. The bass drum, especially, hits you with a high-resolution, three-dimensional thwack. There is also a lot more bass in general — a lot more “kick.” The Blue Box has a more raw, aggressive, hard-hitting, edgier sound. It’s obviously missing some of the little remix tricks that that Giles Martin pulled off, like the cool shaker sounds on the “Shoops” in “Come Together.” But it does faithfully present the mix that The Lads approved.

On my main test track below, “Come Together,” I slightly preferred the edgier sound of the Blue Box copy. I also preferred it on the glorious “I Want You,” for the same reasons. But I liked the thick, controlled, clear presentation of Side 2 a little better on the Giles Martin. So it’s a wash. They’re different, with neither absolutely better than the other. I’m glad I have both.

(The Blue Box Abbey Road cost about half as much as the Giles Martin remix, so maybe it should get the prize!)

Since the “swish-swish” noise is slightly more prominent on Side 2, and since my Blue Box pressing also has more surface noise on Side 2 — and since I think the audio fireworks are a little more in evidence on the meh Side 1 than the creatively superb Side 2 — I decided to focus my listening efforts on Side 1. In retrospect, probably not smart. So much silver hammer.

Blue Box. Some pops and ticks on this one— only one in the box with any surface noise, but it’s not too bad. Really deep, powerful bass on “Come Together.” Thundering. This sounds really good — especially bass drums during the “feel his disease” quiet part. Not like overwhelming or anything, but really good. John’s breathing during the instrumental break is cool and vivid. “Shoop” shakers are really cool and vivid, too. Most impressive thing is the super deep bass. Nice wide soundstage in “Something” and the string fills sounds great. I’m hearing some kind of cool stringed instrument, maybe a mandolin or something, during the “Stick around” middle eight that I’ve never noticed before. Not a fan of “Maxwell,” but it does sound very good — especially the lively, natural drums on the right channel. Ooh, and the Moog sounds super crunchy and nice. Some sibilance issues on Paul’s voice, which is quite bright. Also not a big fan of “Oh Darling,” which also sounds very good: wide soundstage with clean, forceful piano on left and clear, sharp guitar on right. Beautiful bass drum thump at the end of the song. Oh, geez, “Octopus’s Garden” is on here, too, huh? Should’ve just listened to Side 2! Backing vocals sound great, though, and so many instruments, all perfectly sorted on the soundstage. Bubble sounds are really fun. “I Want You”: that’s more like it! Too bad it’s in the inner grooves. Sounds amazing though, especially the drums and the bass. No question, this pressing sounds really good. Wow, so much space around those drums. The guitar solo — a Les Paul on the neck pickup with the tone turned way down — sounds so nice in contrast with the bright, defined drums all around it. One of the nicer-sounding inner groove tracks I’ve heard. The doom guitars at the end sound PERFECT: heavy, spooky, nasty. They build to a genuinely frightening static-crescendo. Good work, Blue Box.

2009 Remaster. Very few pops and ticks, but persistent quiet surface noise in the background, like from low-quality vinyl. Right away, a sense that it’s softer, darker, less dynamic, and less hard-hitting. Really not very good — no life to the drums, way too much bass, pretty dull. “Something” sounds dull and flat, too. Blech. Just turned it up to make sure it isn’t just a volume effect. I think it was too low, and it sounds better now, but still muffled and dark and lacking dynamism. Drums a little livelier on “Maxwell,” but not as good as on the BB, and same sibilance things. Piano has less life than on the BB and the “bang bangs” aren’t as sharp. Synth seems less fun, too. It’s sort of torture to listen to this song three times in an hour. Sigh. I liked the soundstage on “Oh Darling” on the Blue Box version: nothing special here. Paul is really not at his best on this side. Next song, please. “Octopus’s Garden”: nothing sounds very good. “I Want You”: same story. Trying to turn up the volume again to get the drums to sound better, but to no avail: they’re just not in the same focus as on the Blue Box pressing. Not much doom or gloom at the end of the track, just a lot of fuzz.

Giles Martin Remix. Annoying “swish-swish” during quiet parts. Aah, sound is much better than the 2009. Way more dynamic. Bass is really nice — kick drum especially. Maybe a little bit too much bass? Nice wide soundstage. John’s little breathing thing is less noticeable here on the Blue Box pressing. “Shoop” shakers sound cool — less sharp than BB, though, and in a different place(s) in the soundstage. Sounds really good, though — better than 2009, somewhere around BB level. On “Something,” same notes as BB: wide soundstage, nice string sounds. The shakers in the middle eight sound great, and that little mandolin thing is there too. Guitar solo sounds strangely wimpy. “Maxwell” much better than the 2009: piano, drums, yep, and a nice sharp “bang!” That Moog sounds reallllly good here. Sibilance seems to be under better control on this pressing. “Sil-ver Ham-mer” harmony sounds cool. “Oh Darling” is great sounding: wide, bright, lively. Bass sounds huge. “Octopus’s Garden” has a dreamy, wide, fun feel right from the get-go. Cool clavichord sounds behind vocals are very clear. Really great sounding, especially those backing vocals. “I Want You” is sounding great, too: cymbals especially. Although the guitar sounds super cool in the solo, I think the drums are maybe a little less defined and bright as they were on the Blue Box? Doom guitars sound pretty awesome. Maybe less so than the Blue Box?

Full digital (Giles Martin Remix). This sounds really good. Maybe better than any of the vinyl pressings? Huge, authoritative drums. Super lively and dynamic tones, but especially the drums. Maybe it’s just a level thing — it was insanely loud when it came on. But the quality of that kick drum cannot be denied. The breathing during the instrumental break does not particularly stand out, like it did on the Blue Box. “Shoop” shakers sound super cool.

S-2-s Giles Martin vinyl vs. Giles Martin digital. Close, but definite edge to the presentation of the vinyl — a bit more heft and resolution and space and detail in the soundstage. It’s like 10-15% for that heft and slam and space. Cymbals so much nicer and smoother on vinyl here.

S-2-s Blue Box vinyl vs. Giles Martin digital. Less overwhelming bass in vinyl, but more detail and edge. On the instrumental break, more raw and rock n’ roll, with John’s breathing more forward. The “Shoop” sounds aren’t as fun, but that’s because of the mix. More resolution, more force, more edge on vinyl. I like it better — same 10-15% range, though it’s more a question of taste here, since it’s a different mix.

As I’ve been typing up these notes, I’ve had Side 2 on in the background, first the Blue Box, then the Giles Martin remix. They both sound great (despite the damnable “swish swish” in the 2019 disc!), but I like the wide, smooth, glossy, hefty presentation of the Giles Martin just a little better.