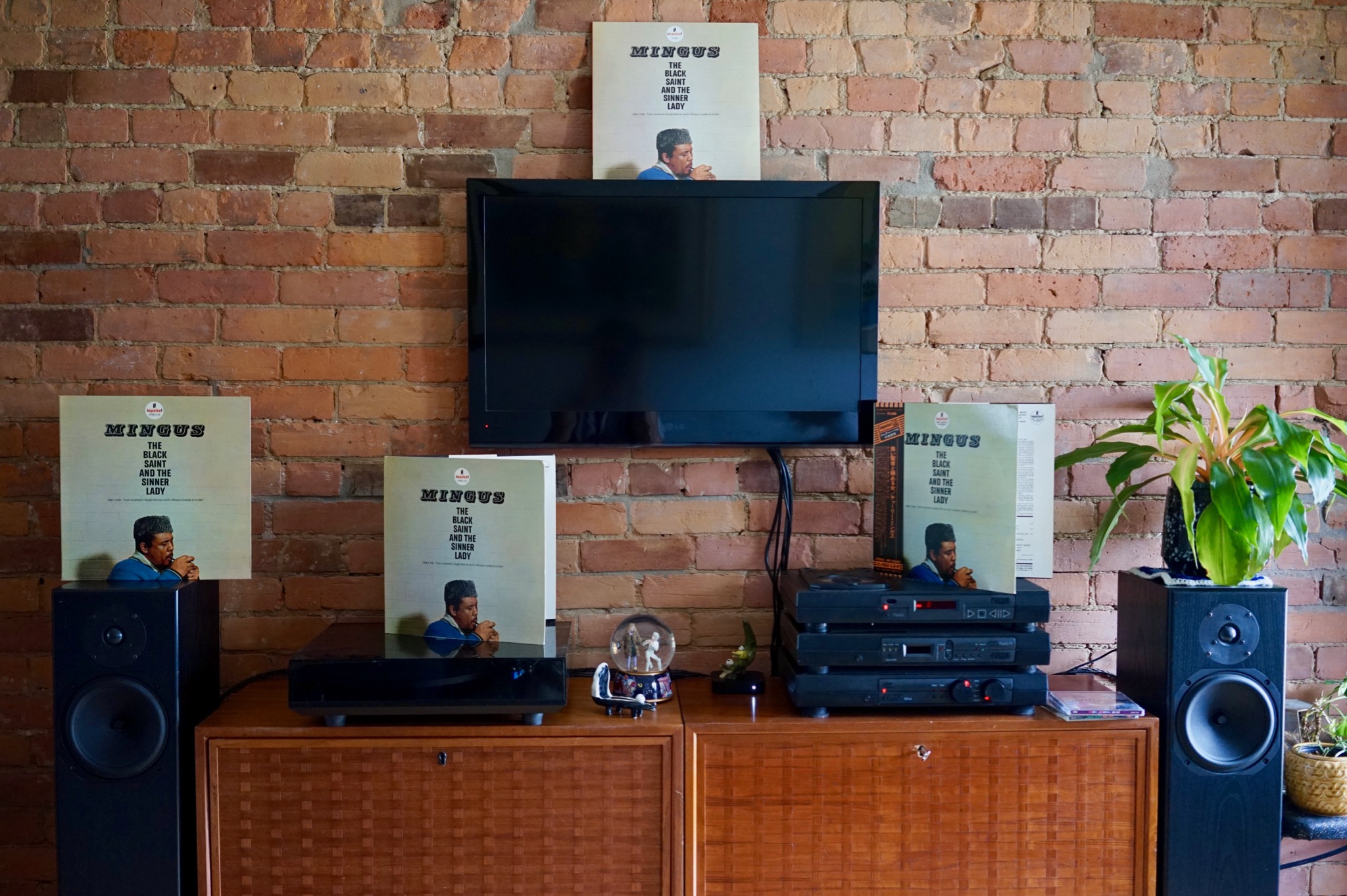 Yes, this is one of the big, massive, ridiculously oversubscribed Best Pressing Shootouts I’ve been planning for months. (There are a couple of others to come!) Four copies of one record! What am I thinking? Let me break it down for you.

I’ve revisited this comparison with my fancy new loudspeaker setup… and the results were slightly different this time! See red text below.

I love this record. It was the record that turned me onto jazz, my current obsession. It’s one of my favourite artistic productions in any genre from any period. I wouldn’t be embarrassed to own ten copies of it.

The first copy I bought was the well-regarded 2019 Impulse “Vital Vinyl” reissue, which I picked up at a local record store for about $20. I was already scouring Discogs for an original pressing, but I’d never heard this on vinyl, and I just couldn’t wait any longer. From what I’d read online, it was a great pressing and — although sourced from a hi-res digital source — apparently comparable to good originals. I played it on my pre-LP12MF system quite happily.

The second copy I came across was very generously loaned to me by my friend Jared: a 1963 Canadian first pressing, under the “Sparton” brand name. It has the VAN GELDER marks on it, so it would appear to have been pressed from the original US masters and metalwork. It also has a vastly nicer sleeve than the Vital Vinyl, with thick cardboard and a gatefold with the greatest liner notes ever, from Mingus’s shrink (God I love this record).

This is the disc I’ve been using as a test-disc in my LP12MF listening tests. The only problem with it: it was producing quite a bit of surface noise and a “grainy” quality, and not sounding all that great against my digital setup. Other pressings were leaving it in the dust. I figured it must have groove wear.

So I decided to bite the bullet and spend a bunch of money on a Near Mint 1963 US Impulse (it doesn’t have the earliest labels, but it’s probably a first pressing). Actually, at $150, it wasn’t that expensive, given what Blue Notes of a similar era go for. But anyway, I was pretty annoyed to receive it and see that it had slightly more surface noise than the Sparton and the identical “grainy” quality. (I’ve noticed that both the surface noise and the grainy quality have been slightly reduced with the Dynavector XX-2 cartridge I’ve got on my turntable now, but they’re still there…)

So, still looking for a really clean copy without surface noise or graininess, I turned where I normally do: Japan. I have a 1972 Japanese pressing of Oliver Nelson’s Blues and the Abstract Truth, manufactured by Toshiba, that sounds absolutely amazing. (I also have a 1976 Impulse Japan A Love Supreme that’s pretty good, though it was manufactured by Victor; for a review of an MCA Japan Impulse, see this other Mingus BPS.) So I thought I would try out the 1973 Impulse Japan Black Saint, which is manufactured by Toshiba and happened to be available (in white label promo) on Discogs in Near Mint condition for $50. I was happy, when it arrived, to see it donning handsome obi and with a cardboard sleeve as thick and almost as nice as the original (just a bit of a greenish hue).

I’ll be comparing them to Tidal’s CD-quality Black Saint, which I know from my LP12MF listening tests is very good and not easily defeated by any vinyl setup…

Returning to these four pressings (no, I have not sold any of them — what is wrong with me??) was a bit of a revelation. They sounded completely different in my fancy loudspeaker setup, which is much more revealing (and also just a lot better) than my previous headphone setup. The differences between them were now much more obvious. Picking a clear winner, though? Much harder.

It played out like this. The Sparton came across as the worst of the lot this time. Especially at the start of the track (“B”), it was grainy and lacking snap. It did get a lot better through the track, though, which suggests this is probably just down to surface wear. The Vital Vinyl sounded much better in this setup than on headphones, but the bass remained annoyingly bloated, and it lacked the fine detail and the zing of the better pressings.

I’ve been listening to Side 1 of this album a lot in recent listening tests, and I’ve given each of these pressings quite a lot of attention recently. To make things less repetitive, I flipped over to Side 2 for this test. But I was not surprised by the results. The Japanese Toshiba was best, followed closely by the two 1963 pressings, followed by the Vital Vinyl in a distant fourth place.

The two 1963 pressings sound almost exactly the same, as one would expect, given the shared mastering and metalwork. The US disc has slightly more surface noise, and maybe slightly more treble. They both sound excellent, beating the digital transfer with their finer detail, space, and impact.

The Japanese Toshiba pressing sounds better than either. It has no surface noise, and has a bit more detail and life even than the 1963 pressings. You definitely lose nothing here over the first pressings, and I think you gain a little. Whatever was happening in Japanese pressing plants in the 70s, it was my kind of thing.

The Vital Vinyl sounds terrible in comparison. It’s incredibly bass-heavy, muffled, and dull. It’s weird: I used to really like the sound of this disc in my earlier iterations. In this setup, it sounds absolutely awful.

So another win for a Japanese pressing! See how it all unfolded below…

Vital Vinyl. Really good, actually — tons of bass, but everything is sharp, too. Too much bass, though, and quite thuddy. Really nice splash on the cymbals, though, and the duh-duh-duh-duh-duh is extremely good. Only complaint is that thuddy bas. Cymbals totally stunning. Big thump in the cordy sax part that I’m really enjoying, and the muted trumpet has tons of character. Really very impressive in terms of soundstage too. Instruments stay very coherent even in the crazy parts. Just wish the deepest drums was less thumps, better defined. Drums in the quiet part are among the best I’ve ever heard.

Sparton first pressing. Wow, much worse. Gritty, lacking sharpness. Okay, nice smoothness on the reed instruments, but the splash on the cymbals is less tiny and not as well placed in space. Less force on the duh-duh-duh-duh-duh. Cordy sax is better! Better, thicker texture. The thump in this part is not as clear. Nor is the muted trumpet, not as fun or sharp. Just a title fuzzy everywhere. Drums are very clear and present in the quiet part, also in a different spot in the soundstage. This is maybe overall 5% off the Vital Vinyl: better in some ways, but overall lacking the splash and clarity of the VV. Thankfully it doesn’t have the exaggerated bass, though. It gets better toward the end, also. As a gestalt (with the packaging, with the aura) I’d pick this over the VV probably. Hmm, the cymbal splash is back by the end of the track.

US first pressing. Crackly at the start. But clearly better than the Sparton. Super clear cymbal splash. Yeah, really nice textures in and around the duh-duh-duh-duh-duh. Best cordy sax, amazing thomp — this is as good as the VV but without the annoying bass emphasis, and I think just a bit more clarity and better textures. In busy parts, instruments stand out with even better clarity. Drums and everything clearly best yet during the quiet parts.

Japanese. Superb clarity right from the gun. Are the cymbals maybe a little more distant, “grainier”? Way more force than any of them on the the duh-duh-duh, more involving soundstage too. The only thing I wonder about is the cymbals. No they’re good. Thomp is great, sax is cordy. Drums amazingly palpable in quiet part. This is my favourite.

Back to Japanese. It does have just a little more shimmer, but maybe lacking just a touch of 3D soundstage and some of the heft of the US original. Tough choice!!

Digital. Useless, awful bloated, no focus on the cymbals, no texture. 50% worse than any of them. Does not belong in this system! Adios!

Sparton plays in the background as a I work out a strategy. So many pressings! There’s no way I can listen to even a whole side across all these different pressings in the limited time I have tonight… So I’m just going to casually throw on the Sparton (the one with which I’m most familiar), Side 2 — too much listening to Side 1 in the LP12MF! — and figure out a strategy. It playing now, and it sounds great: I’ll definitely focus on this part, which has great brassy thomps as well as some delicate-to-raging Flamenco guitar, and lots of nice sharp snare drums and cymbal crashes. I guess I’ll just listen until the apocalyptic THOMP after about 5ish minutes (the digital version says it comes at 4:37) followed by solo piano — “Gaddabbit” and you’ve gone too far. I think that corresponds to “Mode D.” That’ll be my test track, and I’ll do a second-to-second direct comparison with digital for each pressing. So the Sparton sounds distinctly excellent on that whole track: quite thrilling in its textures and liveliness. Might be better than I’ve ever heard it?

Full digital. It sounds really good too, making me reconsider what I’ve just written above. Full, rich, hard-hitting, detailed, engaging. Maybe a little shrill in the brighter trumpets? Maybe just a little hard/flat? It’s easy to be more critical the longer you listen. The Flamenco guitar is perhaps a bit thumpy. But mostly I’d say this sounds very nice on digital, that the lower-register brass sounds especially excellent, and that there’s lots of power. Nice round drums, too. (I do keep reaching to turn down the volume, though — too harsh?) Closing thomp is good but not knocking me all the way out or anything…

S-2-s 1963 Sparton. (Moderate surface noise.) I got the timing exactly right and the levels are exactly the same, so that the comparison really works. The vinyl is about 10% better, with better definition and heft, more space, less of that hardness. Most noticeable on the flamenco guitar and the cymbals. Textures are nicer and presentation is more real/natural.

S-2-s 1963 Impulse. (Moderate surface noise, same pressing volume as above.) Sounds like the Sparton to my ears. Maybe a tiny bit more detail and life on the Flamenco guitar? Again, you notice the finer textures of the Flamenco guitar and the cymbals especially. Same: 10% better.

S-2-s Impulse Japan. (No surface noise, same volume). This one is the best so far. Cymbals so delicate, the brass so full of life and heft. Less harsh, all the detail, bursting with life. Wow, amazing springiness to the guitar. Amazing thomp. 15-20% better here.

S-2-s Vital Vinyl. (No surface noise, vinyl is significantly quieter.) Vinyl presentation is very bass-heavy. Details are coming through a little more clearly on digital, and the brighter presentation is nicer. Too bassy on vinyl — everything is buried, the cymbals sound weak and buried, the deeper brass is garbled. I much prefer the digital here. 20% better on digital.