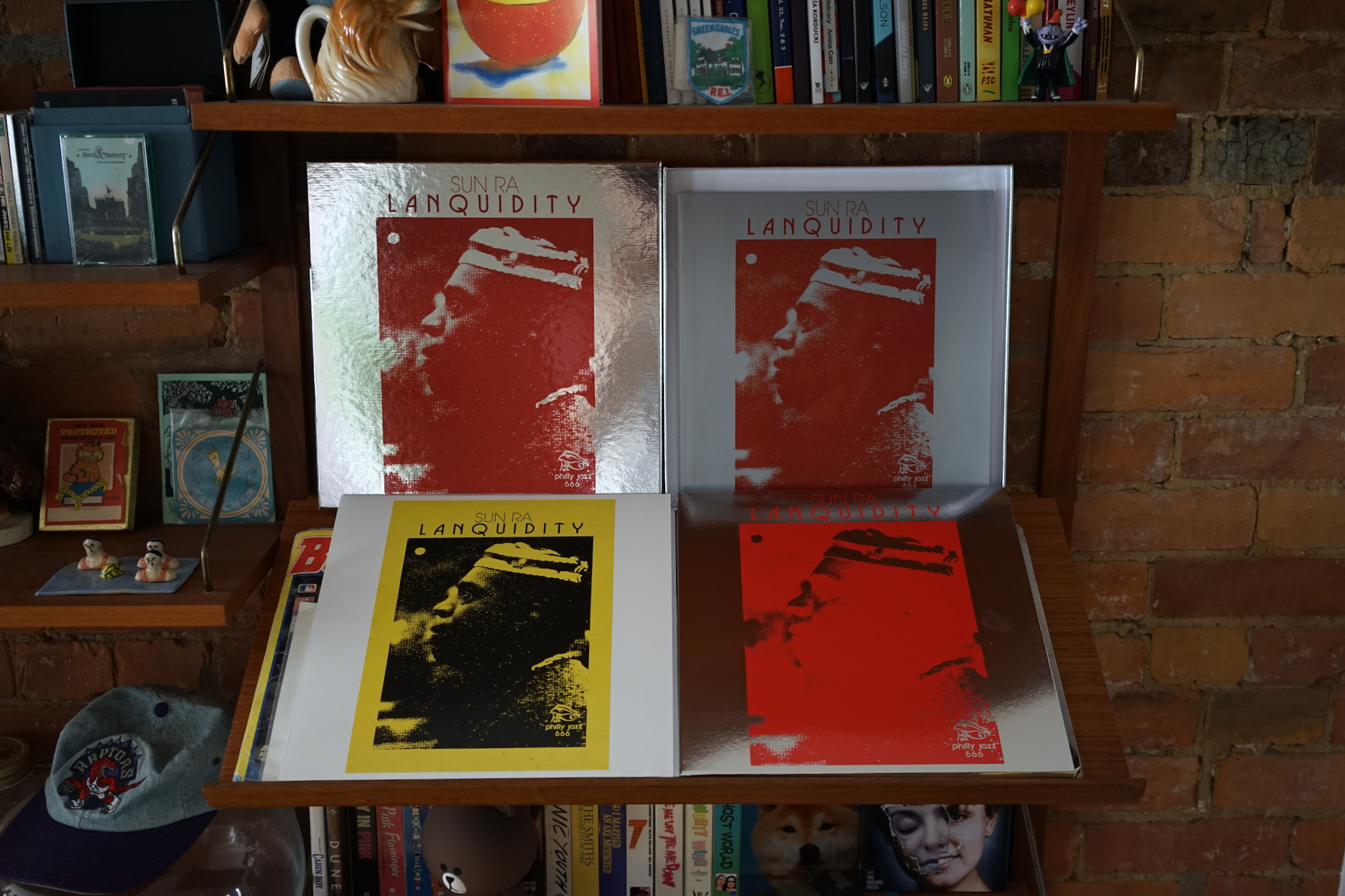 My friend Jared — the one who lends me all his fancy records and who has successfully turned me onto jazz — is obsessed with Sun Ra. He’s got a massive collection of his stuff. I totally understand the obsession. A lot of the Sun Ra music is amazing. As a vinyl collector, there’s lots to get excited about — limited released, hand-painted covers, and so on. Also, somewhat surprisingly, lots of audio thrills for audiophiles on Sun Ra records. An ESP early pressing of Heliocentric Worlds Vol. 1 is one I often put on to see how my system is handling texture…

The Sun Ra record I personally enjoy the most is Lanquidity, which is unusually melodic and funky for a Sun Ra disc. I like the jarring/abstract/truly alien ones too, but Lanquidity is right in the weirdness sweet spot for me. (If I was a baseball player, I would want my walkup music to be “Where Pathways Meet.”)

Apparently I’m not alone in liking Lanquidity. My first thought on hearing Jared’s beautiful pressing was, “How much?” Unfortunately, the answer was, “$1000 or more.”

So I was excited when, sometime in the spring, I noticed that the well-regarded English/German label Strut was reissuing Lanquidity in what they called a “definitive” 4LP / 45rpm box set, including both the silver-fronted album I was familiar with and an alternate mix, for a reasonable-ish price of $60USD. I signed up for the preorder, hoping it would sound close to as good as Jared’s original…

Jared’s 1978 silver-covered Lanquidity — probably the most valuable single record I’ve ever held in my hand — is the one on the left down there.

The Strut “Definitive Edition” is pictured below. It includes 2LP 45rpm copies of the silver Lanquidity and the “Alternate Version” that was sold at Sun Ra shows in 1978 and features slightly different mixes and running times. According to the liner notes, “Much overdubbing was used on this album.” (The New Yorker article occasioned by this reissue mentions some added vocals in “There Are Other Worlds,” though I didn’t notice any difference myself.) The set also includes a booklet with photos, notes, and interviews (it’s nothing particularly special). It’s all housed in a pretty shiny silver box.

The actual vinyl is not of very good quality. It’s thin and light and all four of my discs are quite warped and wavy. I’m not sure where it was pressed, but it’s definitely below-average work.

Labels for the remastered silver version:

Sadly, the “Definitive Version” is anything but. It’s a huge disappointment. I would strongly recommend avoiding it.

The Strut version of the silver disc sounds a lot better than the yellow one, but not nearly as good as the original. The original is a beautiful sounding record, with atmosphere, texture, kick, bounce — it’s what I call an “A” level record, with audio thrills aplenty on tap for audiophiles. The Strut reissue sounds okay, but manages to lose all the magic of the original — all the sense of space, the delicacy of cymbals, the cutting textures of the reed instruments, and crispness and snap of drums. It sounds like the worst kind of digital. Which it almost certainly is.

I performed a “sanity check” this afternoon, playing all three versions of the title track for Jared when he visited. He agreed that the differences were stark. (It’s always an interesting experience playing music for people who are visiting your space — it’s like you’re hearing it through their ears. The depth of bass and the sharpness of the cornets on the OG pressing really struck me on this latest go-round… and their absence on the reissues.)

Even before buying this set, I did wonder what sources they’d be using — specifically, if they still had access to the original master tapes. Recent experience with Neil Young Archives reissues has shown me how amazing reissues can sound when the original master tapes are used. And my experience with Pure Pleasure’s reissue of Glass Bead Games has shown me the shenanigans that ensues when the masters aren’t available and you have to source your reissue from vinyl rips that are cleaned up digitally, creating very complicated chains of original tapes –> mastered to vinyl –> played on vinyl with a particular turntable, cartridge, phono preamp –> digitized –> manipulated –> converted back to analogue –> mastered to vinyl…

Well, it definitely seems that Strut sourced these reissues from vinyl, which was cleaned up digitally. The liner notes contain references to “vinyl sources” and to “audio restoration.”

I’m going to assume that means that these discs were produced by playing clean vinyl copies, recording them digitally, removing clicks and pops on a computer, then converting them back to analog for mastering and pressing. A complicated process. And not one conducive to preserving or demonstrating analog audio magic. These discs sound like vinyl rips that have been messed with digitally and then pressed onto cheap vinyl.

I can’t think of any reason you’d want to listen to these on vinyl rather than digital, given this process. There is definitely no advantage to listening to these mediocre remasters in 45rpm vs 33.3rpm — that’s really only possibly an advantage with the highest-quality sources, which these definitely aren’t. In fact, I see only downsides to the 45rpm presentation — having to get up every ten minutes to flip the side for ten more minutes of meh sound quality.

In sum, save yourself a bunch of money and disappointment and just listen to these on streaming, or buy the CD. Put every cent you save in a piggy bank. When you’ve save up $1000, buy an original Lanquidity!

Strut vinyl is thin and a bit wavy. Pressed by TAKT in Poland, a pressing plant I’ve never previously heard of.

Silver Strut: There is quite a bit of surface noise — maybe from the actual disc, maybe from the vinyl copy they ripped to make this [note, no surface noise on the digital version, so this is just coming from the noisy pressing). The sound quality is good, though. Super-deep bass, good texture on the baritone sax (I think that’s what that is). This is about a B, it sounds good without being in any way a remarkable pressing. Piano is a bit plinky and grating.

Silver OG: Slightly noisier than the Silver Strut. But WAYYYY better. Sounds like it should. Shimmering cymbals, brightly piercing cornets, a huge atmosphere. An “A” pressing with an enveloping atmosphere. Main differences are the snare and cymbal sounds, with are super sharp, detailed. Everything in the treble region is just miles better here. The bass might not be as huge but it sounds better balanced to everything else. The Strut is maybe fine, but this is in another universe. In comparison, it is totally worth $1000!

Yellow Strut. Blunt and boring. Not noticing the surface noise, but this is pretty shitty-sounding. No dynamics, no treble sparkle, no atmosphere. Just waiting for the track to end. Like a C, which is to say really bad.

Silver Strut. This is a lot better than the Yellow Strut, actually quite dynamic. Big, broad, brash baritone riff, pretty fun and involving. Nice wide soundstage with precisely located instruments. Bongos and clean and crisp. The issue is the bass, which is thuddy. B.

Silver OG. Like a different recording. Much wider, thicker, but also with an airy touch, finesse. So much better. It’s a shame that this reissue has been done from a vinyl rip that’s then been edited digitally and pressed onto cheap vinyl. It really shows. So alive and precise in the original, such a disappointment presented as it has been in the “definitive” edition. Bass is deep but tight with no thud. A pressing.

Yellow Strut. Definitely the deadest of them. Sounds like a really bad MP3. C-.

Yellow Strut. Maybe there are at least interesting alternate versions on these yellow discs? This one is quite a bit longer than the one on the silver disc. When the groove kicks in, I can see that it’s at least a wide soundstage and an interesting arrangement with lots going on musically. But in terms of audio it’s dull as dishwater. High end is tizzy and tinny, the low end is fuzzy and dull. The vinyl is also noisy and really uneven. Really nothing whatsoever to recommend this yellow version. C-.

Silver OG. Space, finesse, atmosphere, dynamics — everything that’s missing from the very disappointing Strut set. Just in another universe of vibe and groove. Love it! My ears just perk up at the presence of real sounds.

Thanks for doing the shootout here! I’m sure Strut put a lot of work into this, it’s just a shame that it leaves such room for improvement. If the original tapes were anywhere at all, I suppose they would be with Irwin Chusid. And I doubt that he’d authorize a needledrop-based reissue if the tapes were still in any usable condition (but hey, I’ve been wrong before).

However, as with GLASS BEAD GAMES (the article that initially introduced me to your site), I’ll most likely never be in a position to nick an original, so I guess we take what we get I suppose.

hifiafreply
– In reply to: Joe Buck

Over on stevehoffman, they seem to think the silver disc was likely remastered from the original tapes. Could be… I hear no artifacts of needle-droppery as I did with GBG, could just be a dull remaster. Bear in mind I’m super picky and my hifi is quite “revealing,” so the mileage of others may vary. A second sanity check is underway, with another friend named Jared, who is currently listening to these discs on his stereo, and will report back whether he’s enjoying them 🙂

So, Adam, it’s been a little quiet on you website for a few months. When are we going to hear about your latest hardware/software escapades???

I’ve got a good excuse: I published a book! https://chbooks.com/Books/T/The-Far-Shore
I’ve had a few little things happening on the hifi front lately, though — indeed, I have some interesting (I think!) things to say about power amps and… CD players! That was an unexpected turn. Your comment will spur me on to a post or two in the next little while!

Thank you — your review has saved me GBP50.00 and a lot of disappointment. I appreciate it.