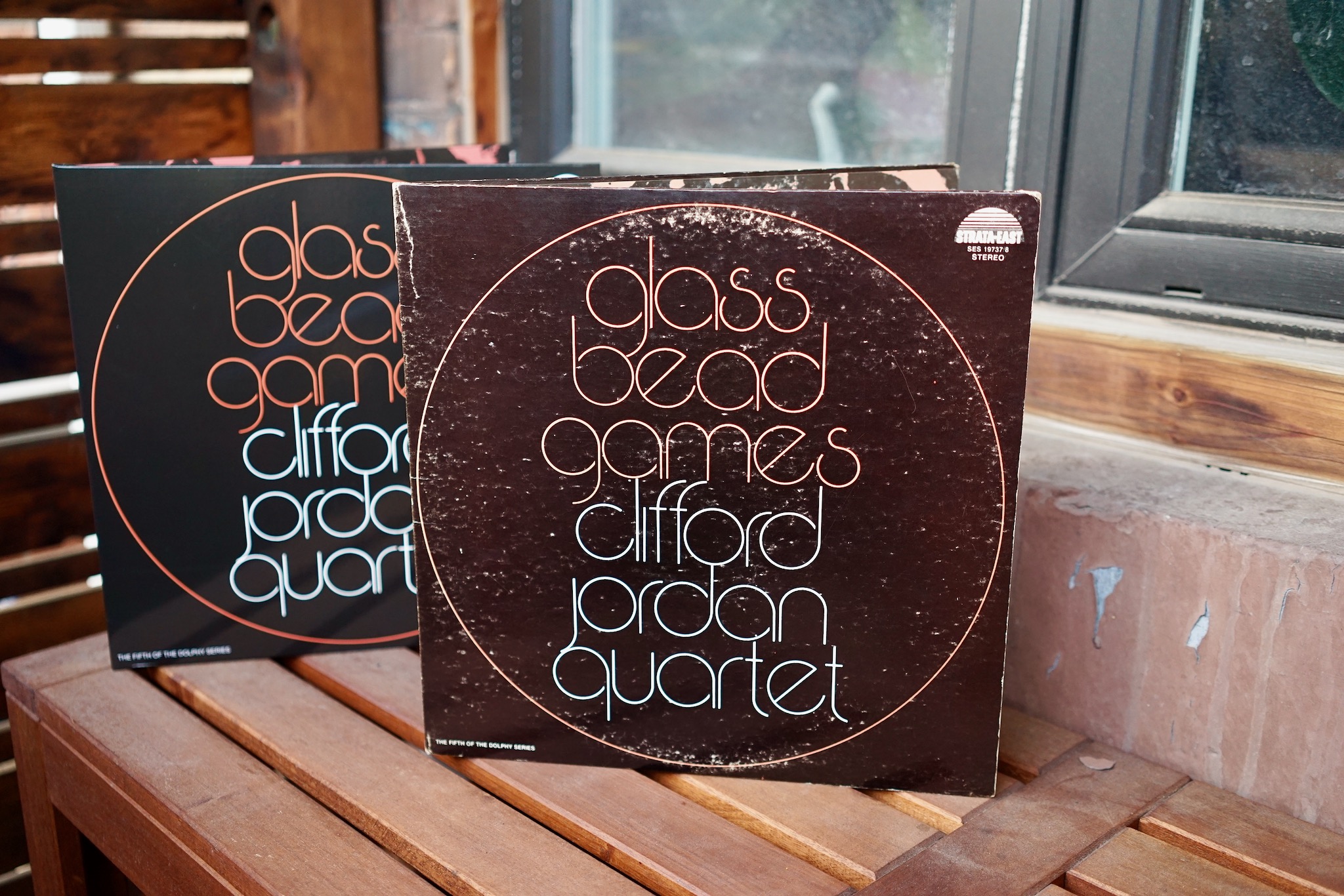 Boy, did I pick the right place to live! Last year, I was spending all my extra cash on multiple copies of the same record to feed my mania for comparing pressings. Then one day last year, early in the lockdown, I looked out my window to see a familiar car — a very distinctive Porsche belonging to Aki from legendary local shop Cosmos Records, the very car that had delivered a bunch of those extra pressings to me mere days earlier. It was parked two doors down. What was he doing there? Delivering a record, of course. But not just any record: it was an original Strata East pressing of Clifford Jordan’s exquisite, and fabulously rare, Glass Bead Games.

I already knew the record, having borrowed the Pure Pleasure reissue from my friend Jared. (Confusingly, my Jazz-Loving Neighbour is also named Jared, but that’s a story for another day. We’ll just call him Neighbour for clarity!)

But I had never heard an original. After spending the last year with it — and after donating his copies of Azymuth’s debut for my last BPS — my Neighbour was ready to let me have a listen. As he had both the Pure Pleasure reissue and the sublimely rare original, all the materials were ready for one hell of a shootout…

In this corner, the 1974 Strata East first pressing. In that, the 2019 Pure Pleasure reissue. See if you can tell which is which…

The 1974 original is a very expensive record (at press time, a mint condition example is for sale on Discogs for $700USD). It’s probably fair to say that Strata East discs command that kind of money not because they have a reputation for audiophile sound quality. People pay the big bucks for music — which is indeed exceptional.

(See this article from All About Jazz for some insightful, if ever so slightly OTT, reflections on the music. Given my remit as an audiophile on this blog, I’ll stick mostly to the sounds… But I don’t do shootouts on music I don’t love!)

My previous experience with Clifford Jordan in the World — a record with which I am obsessed but which sounds merely okay — is in line with this reputation. Strata East was an artist-run label and their artists were saying something. Their focus, understandably, was not primarily on sound reproduction or audio thrills. It was on what the music conveyed.

Pure Pleasure, on the other hand, is all about sound quality. I mean, look at their name… They pride themselves on exceptional sound quality, on name-recognition mastering engineers (Ray Staff, who mastered this disc, has his own Wikipedia page), heavy vinyl, etc. They also go to town with the merely aesthetic side of things, with heavy-weight jackets and nice printing. Accordingly, Pure Pleasure discs are quite expensive. This one sells new for £45.

All of which is to say: it was by no means a foregone conclusion that the original pressing would sound better than the reissue, since the reissue was specifically produced for an obsessive audiophile audience, and the original was not.

Indeed, speaking of the audience for the original… My Neighbor’s copy has an inscription that goes some way toward demonstrating who was buying this record, how they thought of it, what it represented to them. I mean, it nearly brings tears to your eyes…

A quick note on condition. The PP was totally mint, nothing to report. It’s flat and quiet. Disc 1 is slightly off-centre, but not bad at all. The original came to me flat and scratch-free, but pretty dirty. There was a ton of dust on there, lots of fingerprints, and even some caked-on liquid. So it needed a cleaning — which meant that, to keep the playing field level, they both got the same cleaning: an E3 enzyme bath, then a Spin Clean with 0.5% alcohol, then an ultrasonic clean with Ilfotol, then a distilled water bath.

Having said all the above about Strata East and sound quality, I knew this was a good-sounding record from the time I’d previously spent with Friend Jared’s PP reissue last winter. Indeed, I remember being pretty blown away by the sound quality, especially the thrillingly delicate sound of the piano soundboard being strummed at the start of “John Coltrane.” (That is an audiophile track — and it’s the best song on the album, too.)

Further listening confirms this. If Clifford Jordan in the World is ultimately a bit more special musically to me, Glass Bead Games is in another league sonically.

You can get all the gory details below. But here’s the short version. The OG pressing is a bit brighter, has more bite, and has greater textural resolution. (I kept describing Jordan’s sax texture as “gritty,” in a good way!) The Pure Pleasure, while extremely good, is just a bit duller, blurrier, darker, less brilliant.

On a record like this, with lots of gorgeous sax textures, some insanely great bass work (I strongly prefer the first quartet’s songs, on which the bass player is Bill Lee, Spike Lee’s dad! — and he wrote most of the songs, too, what a man!), and lots of shimmery sounds like cymbals and plucked piano soundboards this added textural detail goes a long way.

Is the difference in price worth it? That will depend on your level of obsession with this fabulous disc. The more I listen to it, the closer I get to the threshold…

What fun, a new section here on hi-fi AF!

When listening to the Pure Pleasure reissue, despite its generally excellent sound quality, I did notice something weird and quite annoying. On Side C especially, I heard repeated periodic “atmospheric dropouts” on the left channel, most noticeable with cymbal sounds. It was a bit like the atmosphere on that side just settled a bit, the soundstage contracted on that one side, before spreading back out and coming back to life. It wasn’t that all the music dropped out on that side, just that the atmosphere became muted, the highs muffled.

I might have thought I was just going nuts, except that I was able to compare this to the original… and, no such issue there! (See notes below.)

I then looked on Discogs and saw someone speculating that the PP was a needle drop (i.e., a digital rip of the vinyl being played on a record, not sourced from the original analog masters) that had been digitally manipulated to have the pops and clicks removed. It hadn’t occurred to me — but that would absolutely track with my experience, which did feel like something was being “extracted” from the soundstage periodically, exactly like a click on the left channel was being captured and muted. I did also notice on the Pure Pleasure website that GBG is listed “HI RES / AAA”. Does that mean “Hi resolution digital / AAA.” I mean, that wouldn’t make any sense (recording an AAA disc digitally doesn’t count!), but it does sort of seem like they were working from a hi-res digital file, doesn’t it? Anyway, I’ve written to Pure Pleasure — let’s see what they say!

Just casually listening to the Pure Pleasure. Side A is clearly an A- at least. Especially on “Prayer to the People,” the tones are clear and natural, the soundstage wide, the cymbals sharp. Really well recorded piano. A bit of vertigo at one point introduced by some exceptionally sharp sound.

Side B now. I think “Coltrane” is the test track, pretty amazing sounds at the start (what, like a harp? — no… strumming the piano soundboard!!). Bass is really sharp and tight, great texture or sax, sharp cymbals, piano nicely buried.

I put on the OG for Side C but it’s visually dirty and it sounds crackly. Then I did a quick dusting of Side B for the “Coltrane” opening. And it seems the OG is indeed more magical, though pretty crackly. It’s brighter and sharper, much more cutting and detailed, more fine detail, steel wool vs a sponge.

Back to repress, and the opening of “Coltrane” does indeed lack some bite but the definition in the soundstage is better. Smoother but still plenty detailed and the focus is great. I think I actually prefer it over the OG. Wider, more spacious, more involving.

PP. The bass in the intro has a bit more definition, space, perhaps. Textures not as nice though, really not even close. Sax is duller, more distant, not in a good way. The harsh edge is gone post cleaning on the OG and the OG wins. Mastering just not very good, I think, a bit dull and has lost the high end bite.

OG. Very clear and nice with terrific textures, especially on sax and piano (you feel it in your chest). This feels like a $500 record! Side D too, full, rich. Maybe just a touch hollow or distant on the cymbals (well some cymbals — others beautifully alive) on this side. But really alive and texturally rich all through this side. I’d give this an A- or A, really very nice, clear, sharp, with beautiful textures and lots of force.

PP. The soundstage is a bit more crowded, a bit fuzzier, the textural resolution isn’t quite there. Still really good but not as sharp. Just a bit blurrier. Gotta be the mastering. Some kind of weird sudden pans on this side? Is that on the OG? Like the cymbal mic suddenly pans to the left? Anyway, “Maimoun” is beautiful on this pressing, despite also having the panning thing. Sax especially is rich. Side D. “Alias Buster Henry” is a solid A-, great sax texture and beautiful crisp cymbals. The same hollow/distant tone on some drum sounds is here too so that’s just the recording. None of the dropout things here I don’t think.

Checking for pan/droputs on the OG. “Bridgework,” very nice sharp pianos, a lot better than the PP, sadly for me 🙁 No dropouts! Sax textures on another level.

OG. Killer tones, delicate, with those gritty textures on the sax that I love, gets really nicely sharp at times. Cymbals are wide and delicate. No dropouts/sudden pans. An “A” pressing for sure.

PP. Bass has very nice weight and heft, but the sax doesn’t have the bite, it’s muted. And the sudden pan thing is annoying as fuck and very real. A- with a point off for the weird panning effect.