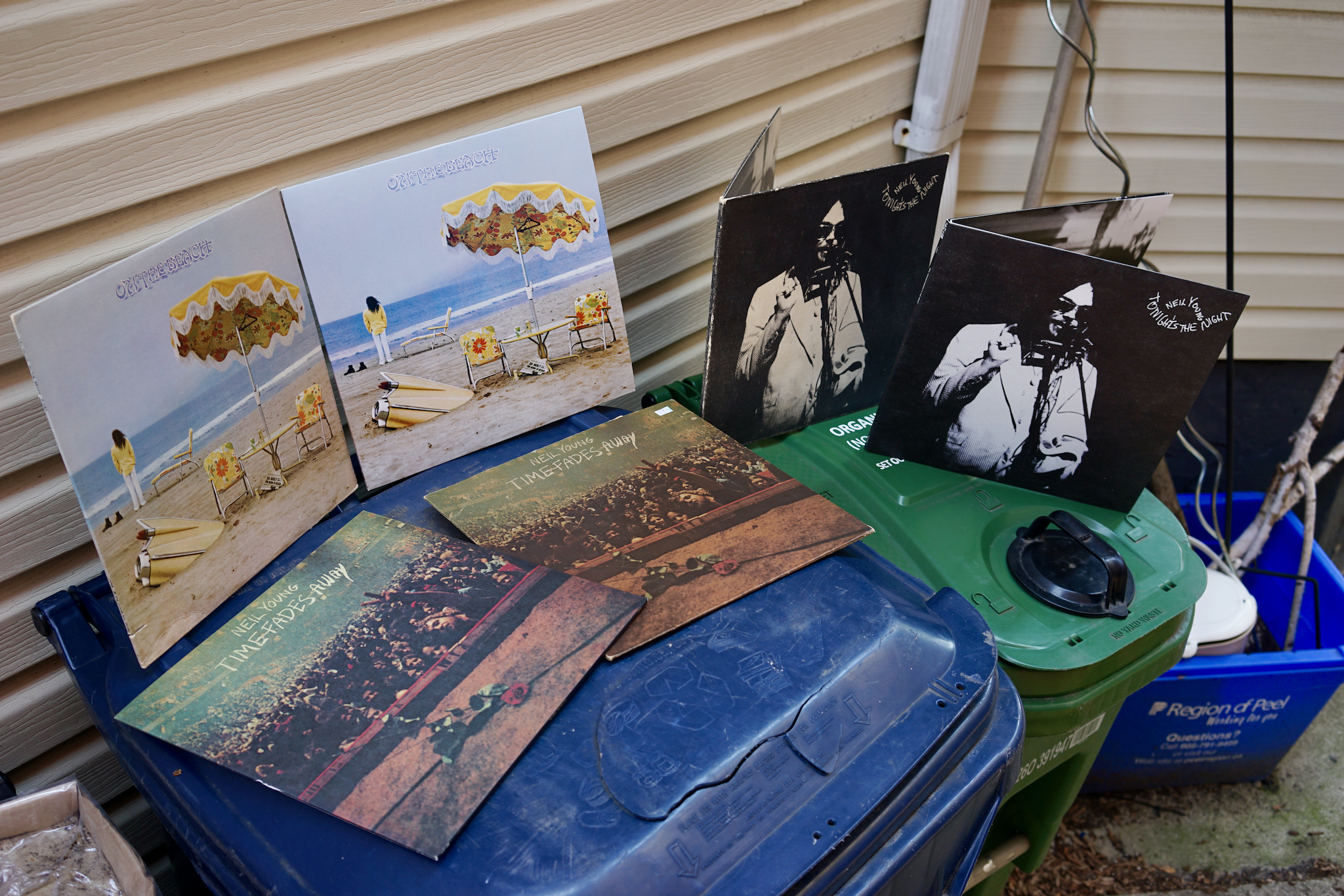 I’m going through a pretty huge Neil Young phase at the moment. I mean, there’s so much to enjoy! I would have first heard his records from my parents’ vinyl copies (which I still have!): the self-titled debut, After the Goldrush, and Harvest are the ones I remember best. Then I had a second phase in undergrad, which focused on Tonight’s the Night and Decade — which I seem to remember having in minidisc copies, somehow! Then more recently… all the other albums!

These are especially a treat to enjoy for audiophiles, since Neil Young is such a sound quality freak (I’m reading his biography Waging Heavy Peace at the moment… and he talks a bit too much about sound quality, even for me!). Over the past couple of years I’ve been consistently impressed by the Neil Young Archives reissues. I’ve found they all sound terrific, especially those mastered from the original analogue tapes. There are some quality control issues with the more recent 140g made-in-the-Netherlands pressings, all of which are at least a little warped, but the 180g made-in-Germany ones are flat and sound amazing.

For this shootout, I draw on the amazing collection of my friend Jared to compare original US pressings of three of Neil’s best records — the famous “ditch trilogy” — against brand new 180g German pressings of the NYA remasters, which I happened to pick up locally recently in the Official Release Series 5-8 box set.

For the first time, I’m making a video of this Best Pressing Shootout, which is probably the more fun way of taking all this information in… though maybe, not, as it’s 15 minutes long!

And yes, in case you’re wondering, I did photograph these sublime records on my garbage cans because… ditch trilogy.

Here are some photos of the Time Fades Away original and the 180g NYA reissue — which, by the way, has only ever been reissued as part of the ORS 5-8 box set.

The original US Tonight’s the Night and the NYA 180g reissue:

The reissue includes the “Hello Waterface” booklet, too.

The reissue has the nice floral print inside the record sleeve, just like the original…

The original Tonight’s the Night is very slightly better than the NYA reissue, with just a bit more sparkle — though I did appreciate the reissue’s weightier bass and wider stereo image.

I liked the NYA reissue of Time Fades Away better than the original: it had more sparkle, a more authoritative bass, and a generally thicker, richer presentation. What a great-sounding record!

The NYA reissue of On the Beach, however, is much better than the 1974 pressing I listened to — almost like they are two different recordings. In comparison to the NYA, the 1974 is flat and dull, hidden in layer upon layer of reverb. Maybe a true first pressing would sound better — but this 1974 pressing isn’t even close.

If you’re interested in getting in to the weeds… read on!

All discs were washed using my ultrasonic process before listening. Volume levels were equalized with a decibel meter.

Original. “Roll Another Number.” Very good, definitely A. Neil’s voice is super in focus and clear, Ben Keith’s pedal steel on the left channel is crisp as hell. Barroom piano terrific texture. Vocals best of all though. “Albuquerque”: focus of the pedal steel, depth and realism of kick drum, all amazing. Vocals A-level too. Very very nice pressing. “New Mama” seems about a step behind perfection, just a wee bit flat, vocals could be a bit better separated. Oh but then when it’s just Neil, the vocals sound incredible. Whatever the percussion is in it sounds great too. The production difference to “Lookout Joe” is stark: whatever Briggs was doing at SIR was massively better. Drums do sound nice, especially the dry snare. Vocals a little grainy. “Tired Eyes” and we’re back to the magic production, especially vocals. Stunningly present vocals on “Tonight’s the Night” to end the album, wonderful atmosphere. Definitely an A pressing, obviously sounding best with the SIR tracks. This is best sounding track on the side.

Neil Young Archives. “Roll Another Number”: immediate impression is that it’s better, and definitely different. More solid, more bass. But less brilliant treble? Magic vocal effect definitely in effect, soundstage is wider — but I think the pedal steel is less crisp. Different mastering, obviously. I like the wider soundstage, with instruments more spaced out (piano is centre-right instead of all-the-way right), the vocals are equally good, but I miss the brilliance of the OG. “Albuquerque”: again, excellent vocals, nice wide soundstage, but missing brilliance on pedal steel and cymbals. Harmonica is great though… nice and sharp. “New Mama” is better here: tapped percussion is deeper, vocals better separated (it’s the audio equivalent of that famous Queen II album cover!), then the vocal texture on Neil’s singing is even better. I think this pressing might be quieter. “Tired Eyes”: amazing detail here, the snare vibrating before it’s being played. Crystal clear vocals. Bass definitely deeper. Similarly stunned by “Tonight’s the Night,” but enjoying it a bit more because the bass is hitting harder and going deeper. Again definitely stands out as the best. Texture on the guitar on the left (really sounds like a Telecaster on the bridge pickup with new strings). Wow, the voice REALLY pops at the end. Just amazing.

I think these sound equally excellent. OG is more brilliant on the high end, NYA hits and kicks harder in the bass. Different mastering choices. Definitely don’t need to seek out an original.

NYA. Yep, amazing. Tone of the electric guitar, delicacy of hi-hat, and most of all the focus and texture of vocals. Oh, the kick drum is massive, too. This is an A or an A+ pressing! Huge bass. Ooh, there’s the pedal steel — lovely! Just amazing. A+! Soundstage is at its most impressive when backup vocals kick in on the left at the end of the track. The start of “The Bridge” sounds ridiculously nice too but that’s OT.

OG. Also amazing! Hmm, maybe just a wee step behind on the clarity of the hi-hat? Bass is kicking just as hard. I think they basically sound exactly the same, with this OG just a tiny tiny bit behind in terms of textures/treble delicacy but 100% equal in terms of drive and kick. Mind similarly blown by “The Bridge.” Is the best I’ve ever heard piano sound?

One more quick back-to-back on “The Bridge” with the NYA. Yeah, treble is a little clear and more cutting on the NYA this time, the vocals bigger and thicker. Yes, definitely use this as my piano test track, so rich and percussive and full of life. Red blooded piano!

Slight edge here to the NYA, both thicker/fuller and with more brilliant treble.

OG. “On the Beach.” Maybe not quite as stunning as Time Fades Away just now… but yeah, great, huge bass, really clear and texturally rich vocals (though there’s some kind of effect on his voice, I guess maybe just reverb, that is putting a bit of distance there). The hand drums sound very cool. Bongos get really cool at points there on the right. So maybe like an A- or a B+? “Motion Pictures” not as crisp initially, a bit boomy, the voice foggy, though the slide guitar is nice and crisp. “Ambulance Blues” not an audiophile stunner, though Rusty Kershaw’s fiddle does sound great. Some kind of cool sparkle on the right channel, too. The vocals are flat though, I think because of the reverb. All in all like a B side (aha, Briggs didn’t produce these tracks!)

NYA. “On the Beach.” Ooh, this seems quite a bit better! Vocals clearer — was all that reverb in the mastering? Bongos are cleaner, crisper. Snare MUCH crisper. Sounds like an A to me. What a vocal performance! I love it when his voice goes deep. Drums really so much nicer on this pressing, vocals too. “Motion Pictures” wayyy clearer here, vocals really nice, not at all foggy. Yeah, vocals are actually huge. Terrific textures on harmonica and on percussion (bongos again?). “Ambulance Blues”: vocals clearly have reverb but they’re crisp, clear, and beautiful. Another A track on an A side.

Very big and obvious win for the NYA reissue. What on earth is going on on “Motion Pictures” and “Ambulance Blues” on the OG?