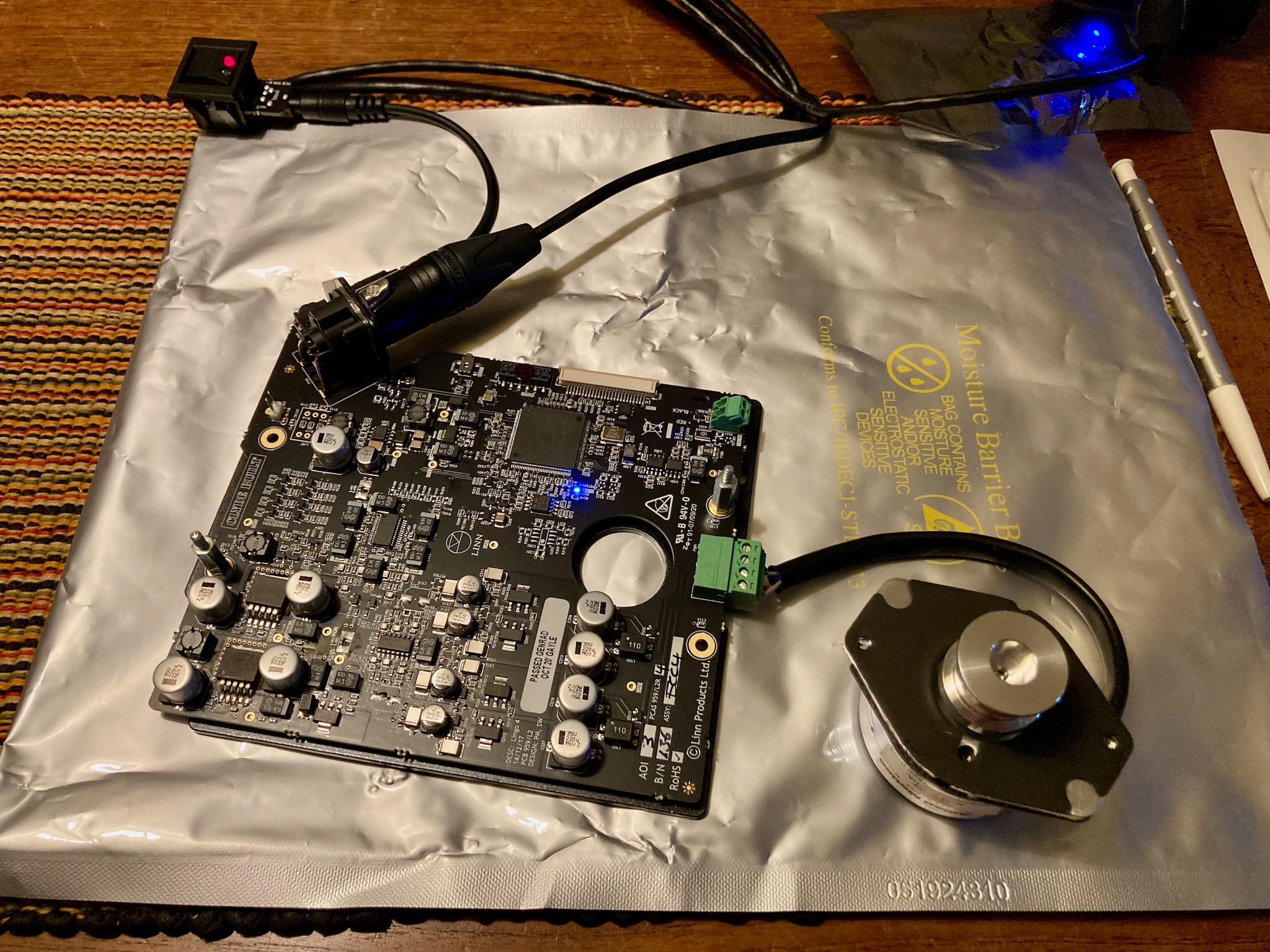 If you’ve been following this blog and my LP12 Modification Frenzy in particular, you’ll know I’ve had some issues with the Lingo 4. I bought one in December of 2019, then found that it had a ticking motor when I installed it. Unsurprisingly, the noisy Lingo 4 did not sound better than the Mose Hercules II system it replaced. So I tried to get a replacement for the noisy Lingo 4, which after much struggling I eventually did. You can read the whole story (it’s long!) here.

Anyway. This whole experience left me (a) very bitter with Linn, whose customer service sucks and who were clearly aware of the problem with the Lingo 4 motor but were unwilling to admit it; and (b) terrified to even try the Lingo 4. I figured I would ruin much of its value by even opening the box — and then I was afraid that if I did try it out, I’d find that my replacement was noisy too, so be back where I started, unable to sell it and having to navigate the Kafkaesque terrain of Linn’s evil dealer network.

Also, I was happy with my Mober DC unit and didn’t think an AC motor of any design could sound as good. There was really no reason to try the Lingo 4.

Except curiosity. Which is a powerful force. It’s what led me to start this blog.

Eventually, it won out.

It’s the quietest motor I’ve ever used. I didn’t realize it was possible for AC motors to be this quiet, but this one is.

I don’t know if Linn have fixed the issues with the Lingo 4 motors in general or whether I simply got lucky with this one. But it seems most likely that it’s the former, that Linn have silently (note the exquisite pun) identified the issue and fixed it.

Why do I suspect this? Because the new motor is clearly different from the old one — like, actually a different model.

They also look different. Note the little sunray-patterned cutouts in the new motor, not present in the old one:

The instructions in the manual I received this time were slightly different from the previous version, too. Mostly these differences relate to using plastic standoffs to eliminate the well-known grounding issue with the Lingo 4 board, discussed in detail here on the Lejonklou forum. Even following the new instructions, I still got the grounding problem (I think the Linn instructions have the location for the plastic standoffs backward — or, you know, it’s possible I just mixed them up!). Thankfully I run all SMPS power supplies on a completely different ring/circuit from my linear power supply gear, including the phono preamp, so there is no chance in practice of inducing a ground loop in my system. When I tested for it, though, it was definitely there: a loud BUZZ when I plugged in the Lingo.

When installing the Lingo this time, I finally figured out what some the circular aluminum bits included with my Tiger Paw Khan top plate are for: they’re mounting points for the Lingo/Radikal tachometer! They make installation very slick indeed. I love Tiger Paw for thinking of little details like these. The photos tell the story. Goodbye big ugly stamped steel plate, hello elegant aluminum attachment points.

Otherwise, the installation procedure is the same, so I’ll just refer you to my old guide.

How does it sound?

Oh Linn, you bastards, you’ve done it again! Just when my hatred for you was reaching its boiling point, you’ve gone and twisted the knife by… sounding amazing.

Yes, I wanted to hate the Karousel — but it sounded amazing. I also definitely wanted to hate the Lingo 4, after all it had put me through. But there’s no denying it: it sounds better than the Mober DC — thrillingly so, bringing new depth, clarity, and finesse to my system. It is also rock-solid in longterm use, producing not a single audible speed wobble in the three months I’ve been using it.

I initially installed it in the midst of my Karousel testing. I had the Karousel in and was stunned by the difference it was making. I had just put in the Kore and had noticed that it took things back a notch, muting the whole experience. It was at this point that I removed the Mober DC motor and installed the Lingo 4, listening to the same seven records mentioned in the Karousel review.

If the Kore had taken some energy, finesse, and excitement away from the system — swapping the Lingo in gave the system all of that energy back, even though the Kore was still in place. The main difference was the clarity of textures and the way instruments were clearly placed in space. I immediately perceived it as a big difference.

On the Dolphy disc, I experienced delicacy and detail I had never experienced before — the Lingo had vaulted the system to new levels, despite what I knew was a less-than-ideal Kore. On Stay Awake, everything was cleaner, faster, and sharper: I experienced what I sometimes think of as the “electric eel feeling,” when instruments feel alive, teeming with life, like you could reach right out and touch them — and that touching them might produce an electric shock! The other tracks were less obviously improved, but all sounded quicker, cleaner, and punchier.

I figured getting the Mober subchassis back into the deck would make things even better, adding even more energy and excitement. Sure enough, the Lingo 4 + Mober subchassis sounded absolutely incredible — just shockingly good. It took the Lingo + Kore sound and added sparkle, a sense of scale, and extension in the bass and treble. The realism on drums especially was mind-blowing and something I’d never experienced before.

On Low’s C’Mon, I heard detail I’d never noticed before — especially reverb on the vocals — and there was a depth and solidity to the bass that was absolutely new to my experience of this (amazing) recording. The kick and drive on Stop Making Sense was insane. When listening to Pentangle’s “Bells,” I wrote “I feel like I’m inside a steel drum being banged,” which apparently was an experience I was enjoying. Timbres sounded more “right” on the M&K Sampler. The soundscape on Stay Awake was engrossing, enveloping, with perfect textures. Out to Lunch was otherworldly, an epiphanic experience with all the sizzle, dynamics, detail, texture, and involvement that a hifi nerd could ask for.

Conclusions and Comparison with the Mober DC unit

I have not gone back. There might be better motor systems than the Lingo 4 (than this Lingo, that is — this one that is quiet and which works). But I have not heard anything better.

It’s clearly better than the Mober DC unit in my system, producing clearer, deeper, steadier sounds. The Mober DC unit would occasionally produce little audible speed wobbles as the tacho/CPU communication loop got confused and tried to catch up; the Lingo 4 has been totally rock solid since I started using it in late December. The motor is physically quieter in my hands than the Mober DC. Given how much of an upgrade I felt the Mober DC was over the Mose/Hercules combo it replaced, the fact that the Lingo 4 is this much better still is pretty stunning. Among other things, it shows how totally crucial the motor/PSU is to a great-sounding turntable: you really do need to start your upgrade path there.

Given what I’ve been through with it, I can’t really recommend the Lingo 4. But mine sounds great — good enough that I will stop thinking about motors and PSUs now and just stick with this one.

Next step: “Externalizing” the Lingo

Of course, I couldn’t quite leave it stock. One thing bugged me about the Lingo 4, despite how amazing it sounds: that its electronics are mounted internally in the deck. The advantage off the original Lingo 1 over the Valhalla was supposedly in large part that it moved the electronics and their various nasty fields and waves away from your super-sensitive cartridge and tonearm lead. So why was this latest, greatest iteration right back where the Valhalla started?

Naturally, I wanted to “externalize” the Lingo 4 boards. A further advantage presented itself: I never liked the way the Mober box looked… but the Lingo 4 boards would fit right inside a Naim-style shoebox case, thus fitting in ideally to my hifi aesthetic.

This externalization project — the “Palare” as I have called it — will be the subject of my next post. For now, a couple of teaser pics!

Great ending to a frustrating saga!

Agreed! Definitely a pleasant surprise to me. If anyone out there is looking for a REALLY objective of the Lingo 4, this is about as objective as it gets. I was very, very biased against loving it — and I ended up loving it.

I’m very surprised when hearing that Lingo 4 AC motor is more silent than Mober DC motor, as I heard that Mober and Radikal both use Maxon DC motor. Just a guess, the Mober enclosure added on top of Maxon motor doesn’t fit well and leads to unexpected vibration.

I hooked up the Mober PSU but every once in awhile the speed would drop so I sent it back and hooked the Lingo 1 PSU and didn’t realize how much better the Mober PSU sounded over the Lingo.I have upgraded everything with Mober parts except for the plinth and just recieved my Mober subchassis which I will be installing soon.Every upgrade has brought the sound up to the next level.

New Linn Radikal coming out, and a “topper” of the line cartridge……………..
Round 2 for power supplies and cartridges???
😉

Anyone has experience with the Zeus PSU? It is supposed to be at the same level as Radikal even if AC. I’m in the process of upgrading from Lingo 3 and pondering between Lingo 4 and Zeus, unless I can find a very good deal on a Radikal

I just got a Zeus PSU and all I can say is WoW. I also have Mober DC, the Zeus is better and comes to perfect speed faster. I’m using a 110v motor with a Mober pully it’s great using a AC motor that you just mount to top plate no till no half balls just nuts and bolts. I’m really diging the soundthe Zeus is a great buy.