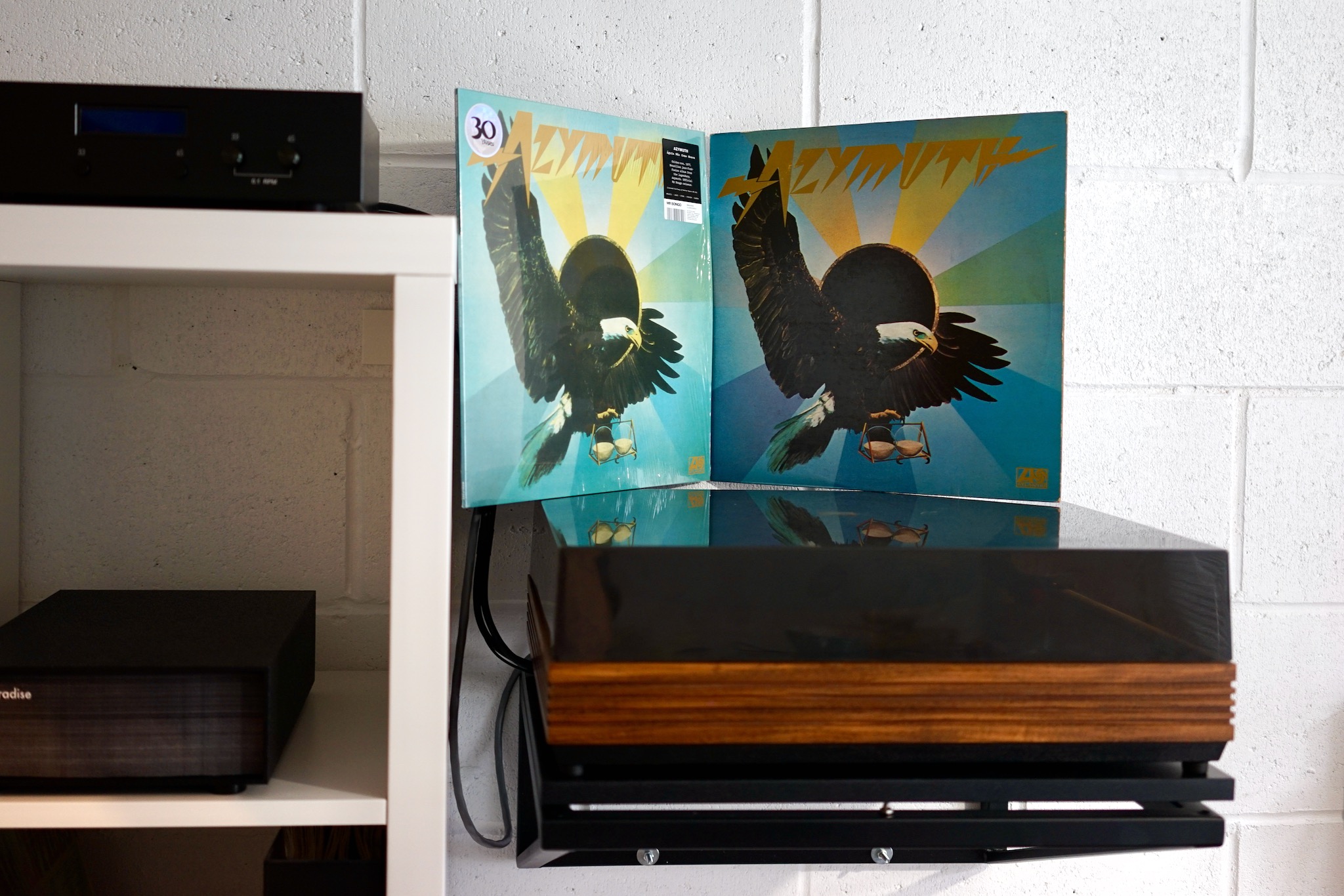 There is a moment in a story by I. B. Singer — I can’t remember where exactly, and maybe there are several of them — where he says that at a certain point in his career, it wasn’t about writing stories anymore. Once he had attained a certain fame, once people saw the kinds of things he wrote, people starting knocking on his door and telling him truths much stranger than anything he could invent. Stories started coming to him.

May something similar happen to me with records. Rather than buying multiple copies of my favourite records — something I continue to persuade myself to do, always with the lame excuse of it making for enjoyable content on this blog — maybe people will just bring me their doubles, or their copies of records I own in different pressings.

If so, this is the start of a trend. My neighbour Jared S brought me two copies of this extremely rare and valuable record sometime last summer. I listened and made notes, but wanted to really nail my loudspeaker setup before making a firm final judgment. So I borrowed them again this weekend and gave another listen. The verdict is now in.

Normally I don’t talk much about the music in my Best Pressing Shootout posts. Probably because it’s stuff I know really well and assume you’ll all know too.

My ears tell me that I like Azymuth. A bit “loungey” on the second track, my notes below reveal, but mostly really fun, lush, lively music with a bit more of a psychedelic rock edge than I was expecting — fuzz guitar and crunchy synths. My notes also suggest that there are lots of “fun pinchy jungle sounds.” You’ll need to listen for yourself to figure out what that means!

One last note on the name “Azymuth.” Turntable nerds will notice this as the name of a crucial vinyl setup parameter: a stylus’s azimuth is its straightness in the groove, and it’s very important, and you can obsess over it endlessly (obviously, I have myself). But I swear I don’t only do Best Pressing Shootouts on records by bands whose names pun on turntable lingo…

Jared provided me with what I bet are the two best pressings of this disc. A near mint 1977 Atlantic Brazil original:

And the 2019 Mr. Bongo reissue, which uses nearly identical labels (the colors are a bit less vivid):

The original pressing is a very pricey record indeed; the average selling price on Discogs is $172CDN at time of writing. The reissue goes for about $30.

Jared said he thought Mr. Bongo use vinyl as their source — that they record the record as it is played on a good turntable, digitize it, play with it in the digital domain a bit, and then press it back to vinyl. However, a browse on stevehoffman suggests a lot of their stuff is mastered from the original analogue tapes. I have no idea where this one comes from, alas.

The good news here is that both these pressings sound really good. The original pressing does sound quite a bit better, especially in direct comparison, where it’s got more of the analogue magic you hunt for as a vinyl obsessive: shimmer, filigree, that little lifelike flutter around the edges of sounds.

But the repress is also really good. It’s got the drive and the impact of the original, delivers a lot of the textural detail, and provides a very satisfying simulation of the experience of the original pressing for one fifth (or less) of the cost.

The only real knock, which I only complained about in some iterations of my system, was a bit of bloat in the bass — a common complaint I have with recent reissues, which tend to really pump up the bass. The reissue also has a physical problem all-too-common on recent reissues: a pretty noticeable warp, on the copy I tried anyway. It wasn’t audible on my system, but still…

So which to buy? Here’s the best advice I could come up with in the notes below: “No doubt I’d pay whatever the extra is to get this pressing, having heard the two. Or I’d buy the cheaper repress and go out of my way to make sure I never heard this one.”

This is another one that I listened to in my in-flux system last summer — on two separate occasions! — then again with my more-or-less finished system, which is as below:

Well this is my first time listening to any music on the recapped NAP 135, and it’s pretty stunning. Definite audio thrills. Pinpoint imaging, really precise synths with amazing textures, and incredibly nice drum sounds. My system is sounding very fine, and this pressing is giving me lots to work with. I have literally never heard this record before, so I have no preconceptions whatsoever. Also, it has no liner notes, so I have no context. It’s a bit loungy, a bit bachelor pad. So what I’m going to do is just listen to all of Side A on the original pressing, and then all of Side B on the repress, and then pick whichever song gives me the greatest audio thrills and do a direct back and forth on a particular track. Ooh, track 3 is definitely full of thrills: crisp rim hits, juicy synths, lively slap bass. Whatever the little bell-sounding thing is sounds amazing. The electric bass is really lovely, round and springy, especially when the bassist is playing chords — whoa. Turned up a bit, the bass has incredible drive and propulsion. I’m extraordinarily happy not only with how this pressing is sounding but also of course with how my entire system, from the Troika’s line-contact stylus to the Yamaha’s beryllium drivers, are all sounding together. I’m actually somewhat disturbed by sensations of weird creatures surrounding me on all sides with this track, which must be the fourth? The sounstaging is frighteningly good, and the textures are frighteningly real. Last track on Side 1 now, with singing and some cute sounds, but less audio thrills. It’s between 3 and 4 from this side, both excellent and full of audio thrills.

Pretty warped pressing but not really audible. Love what I’m hearing from this, right off the bat. Tons of bass here — more than side A, clearly — but lots of nice textural detail too, those cute little pinchy jungle sounds that seem to be this disc’s trademark, and the little scratchy sounds, and the very 1970s slappy bass sound. I might not be quite getting the same width and precision on the soundstage as I was on the OG. Really pretty amazing force and drive on drums, then beautiful pinpoint accuracy on the little squeaks and pricks. Track 2 starts with fun deep analog synths, and then kind of opens up with mostly acoustic sounds (drums, various shakers). I don’t think I’m quite experiencing the audio thrills of the other side, but I could just be getting used to how superb this is all sounding. A little sharp and edgy toward the end of the track, definitely not my favourite sounds here… Track 3 is laying on the classic funk pretty heavily, big stomping bass line, funky riffs everywhere. This track sounds a lot better, wide and layered, all sorts of very different sounds working really well together. This could be a good comparison track because there is quite a lot of action to work out — harder for the replay system than just making a few really nicely recorded instruments sound good. Track 3 is a nice laid-back groove, that wakes you up with some nice sharp bass and a few little texture-clouds. Track 4 is a little too frantic for my tastes, and no particularly obvious audio thrills on offer…

Repress. Tons of bass here, really nice soundstage, crunchy synths, sharp wood block. Definitely feeling the kick drum in my chest. I could use a bit more clarity on the Rhodes, but that could just be the recording (or the instrument). The bass end of things does get a little confused when the singing starts. I do wonder about some bass bloat and maybe just a smidgen lacking in clarity, but I would be really happy with this if I just picked it up and threw it on — great sounding record, even with the slight warp. In the quiet break at the end with the really sharp little synths and the wood block — plenty of thrills and a real sense of a 3D soundstage. Super crunchy, super precise synths at the end. Really nice.

OG. Whoa, clarity and width are in another league. The bloated bass is gone. The wood block is suddenly CRYSTAL clear. Wow. Huge difference. No confusion whatsoever when the singing comes in. Soundstage is twice as wide, and sharp sounds are really, really amazing defined in space. Ooh, that little critter that walks over from left to right? Super-precise, far moreso that on the repress. Less bass, definitely, but you don’t miss it — the repress really exaggerates it. Plenty of bass in the original recording on a decent setup.

Then I listened a few days later, still in summer 2020

Repress. Really impressive sounstaging. Wow, my system is at another level. Really deep bass and amazing clarity, especially on the anvil-like sound. This is really very excellent, full of audio thrills, as I like to call them. Full bandwidth, total control of the full spectrum. And the little synth sounds like fireflies crackling all around the soundstage. Not bothered by bass bloat here — it just sounds awesome. The crunchiness of the synths at the end is incredible.

OG. Wow, yeah, you think it can’t be better, and this original press just comes and knocks the other one completely out. Stunning clarity and soundstage, textures totally unbelievable (i.e., totally believable). Total clarity and coherence when the vocals come in. No doubt I’d pay whatever the extra is to get this pressing, having heard the two. Or I’d buy the cheaper repress and go out of my way to make sure I never heard this one.

Revisiting in April 2021, with a system several steps better again

Side A, repress. Really really nice sounding music. Soft plush bass. Truly nothing to complain about — it’s really great, stuff that’s supposed to be sharp is sharp, stuff that’s supposed to be soft is soft. Wide soundstage, great detail. Warp is not audible in playback. Subwoofer (new since last summer) is definitely killing it for the bass. Track 2 isn’t doing it for me. Time to try the original.

Side A, original. A bit of surface noise. A bit sharper, crisper, definitely, the wood block clip-cop, the acoustic guitar. Then the synth-cloud is much more energized, charged. The stereo image is quite different, less centred, using the full width much more. Even the bass seems deeper, though there’s less of it. A bit brighter and sharper on the top end, too. I’d pay the extra for this version, no doubt!

Track 3, repress. The meatier presentation is actually nice on this track. Image is more constrained and centred (the image was more left-leaning on the OG — and no I’m not talking politically), and doesn’t have the same high-end shimmer, but I do enjoy how thick and meaty it is. Doesn’t sound as “analogue” though, lacking the shimmering high-end filigree detail. Great bass, really good overall, but lacking the magic shimmer of the original.

excellent note! I’m not a big fan of reprints!!! but some of mr bongo’s are well done…never buy the editions of the polysom ​​label…they are poorly made…there are many complaints in brazil and abroad…greeting