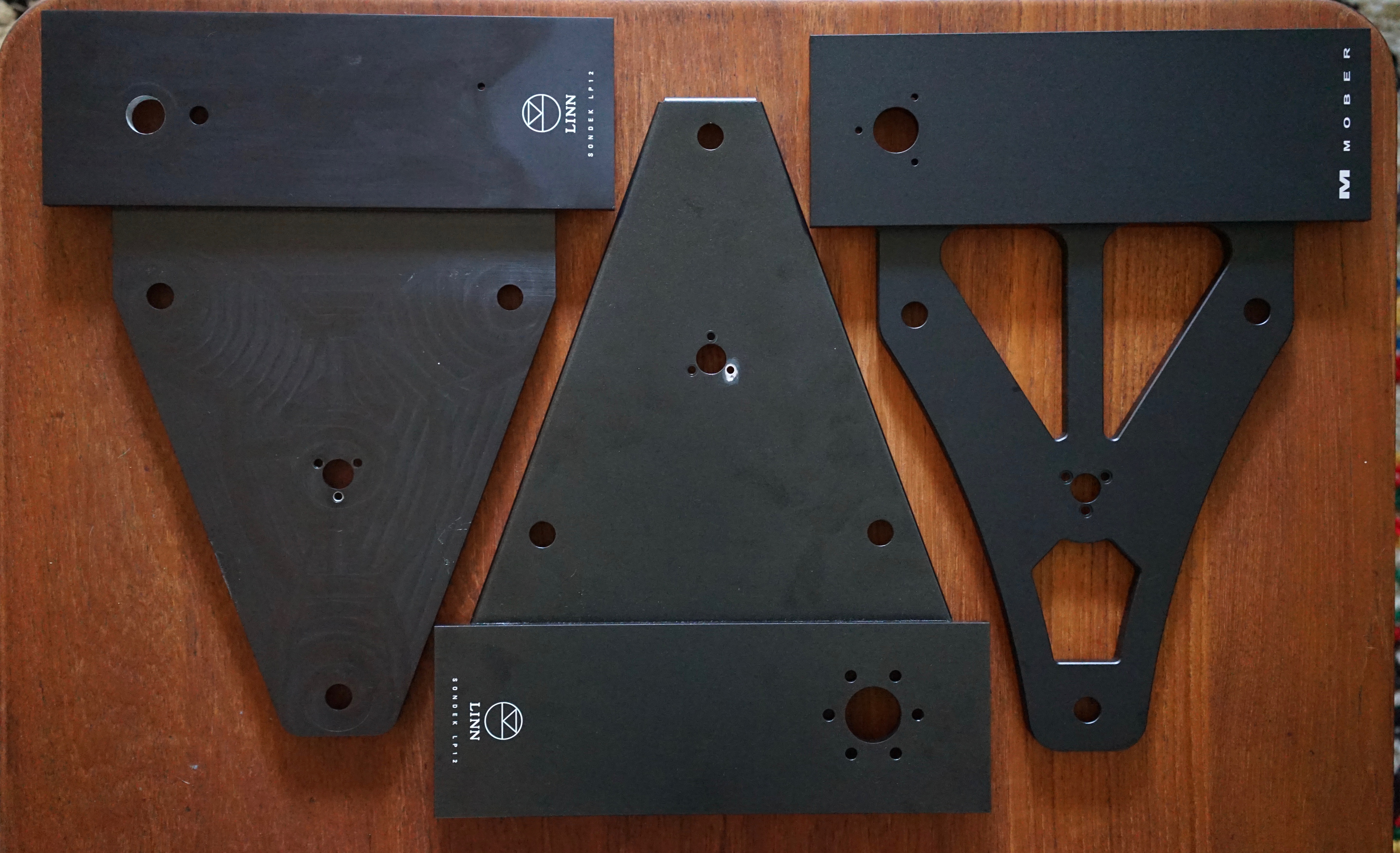 I find myself in an unsual position: I have three different LP12 subchassis in my possession, none actually installed in a turntable. I doubt very many hifi shops in the world have similar bounties — and if they do have three, they’re probably the three Linn models, not these ones.

So why not take advantage of this peculiar situation and make some comparisons! Since it’s impossible to evaluate how they sound all at once — I only have one LP12, and I’m not yet convinced that subchassis have “sounds” — I’ll limit myself to physical comparisons.

Why do I have them? For my LP12 Modification Frenzy, which began yesterday, and about which you can read more by clicking here.

Which do I have?

The Linn Kore is made of multiple pieces of aluminum glued together, with a machined aluminum armboard. The finish is painted — it’s not quite black, but rather a very dark grey with a bit of a sparkly finish. Obviously it’s got the proper Linn Logo.

The Greenstreet is machined from a single piece of aluminum. The aluminum is sanded to a smooth surface on the armboard; you can see machining marks everywhere that is hidden when installed. It is black anodized. It’s clearly very nicely machined. It comes with no logo — the one you see is a DIY effort by the previous owner.

Like the Greenstreet (and the Keel), the Mober is machined from a single piece of aluminum. (There has been some debate on the forums whether it’s forged, but Edmund said it’s machined, and I don’t see any forging marks. I also doubt whether Edmund would have a big enough order to justify the creation of forging dies. Maybe Linn could — forging would make the Keel cheaper, and arguably stronger.) The surface is uniform but not smooth — it’s more like the finish on my olive Naim Nait 2 case, or my Target stands. It is black anodized. I hoped to be able to remove the logo with nail polish remover, but that didn’t work. Edmund says there is no way to remove it. (Yes, I asked.)

This is one I’ve been curious about. It seemed quite clear that the multi-part bonded Kore would ring less than the single-piece Greenstreet and Mober. That was indeed the case. Here are recordings of me knocking each of them with my knuckle, while they’re hanging from a string. I’ve also included a frequency analysis (produced in Audacity) for each knock tone, with the peak frequency for each identified. Every subchassis is a little different here in “liveliest” and/or resonant frequency. I do imagine this would affect playback performance — though exactly how I cannot say.

As you can hear, the Kore does not resonate very much when knocked — it is quite “dead.” Its peak frequency, according to Audacity, is 407 Hz (G#4).

The Greenstreet is much more resonant — much more “lively.” Its frequency peak is very close to that of the Kore: 415 Hz, also G#4.

The Mober rings loudest and longest — is the most “lively” — of three, but is much closer to the Greenstreet than to the Kore. Its peak frequency is 699 Hz, F5 — quite a bit higher than either the Kore or the Greenstreet.

A grain of salt (maybe a rock)

Based on some feedback I received in a thread I started on pinkfishmedia, I decided to try tapping the Mober fully installed. This is what it sounded like:

As you can hear, all the ringing is gone. So in the system, it seems that the resonant frequency and the “liveliness” of the subchassis doesn’t have much of an effect.

Here is the frequency analysis of that sound, for what it’s worth. (My ear detects no actual note.) Audacity reads this having a peak frequency of 496 Hz — different from the subchassis in isolation. The next peak is at 689 Hz, close to the Mober’s resonant frequency of 699 Hz.

And that, my friends, is a physical comparison of three LP12 subchassis.

Hi, I like what you have done there. Have you ever looked at the Analogue Innovation Sole VIII sub-chassis? I have one on my LP12 with Tiger Paw Khan Mober plinth Mober DC power supply Roksan Nima Audio Origami rewired with tiger paw sKale counterweight. I’ve been using ZYX R50 Bloom 3 or a Denon DL-S1. I been very happy with both cartridges. Mober plinth is great impovment with a Khan you should gave it a try, I would have love to gotten a Stratos plinth the cost is to much just as with the Javelin.

hifiafreply
– In reply to: Robert

Hi Robert! I haven’t tried the Sole — so many components, so little time, but I’m certainly interested in the design. Now the Mober plinth I will be trying as soon as Hong Kong Post starts shipping to Canada again. I’d also have loved to have tried a Stratos. My Javelin was “ex demo” so about 40% less than a new one — but I would have paid full price if I’d known know much I would love it!

Hi,
So what were the results. I am considering the Mober for my LP12
Tara

hifiafreply
– In reply to: Tara Lewis

Many months later, I’ve tried lots and lots of subchassis, and the Mober is still my firm favourite.

So is the differences between chassis that great? Or is it more subtle? Curious as I am considering a Tangerine subchassis.