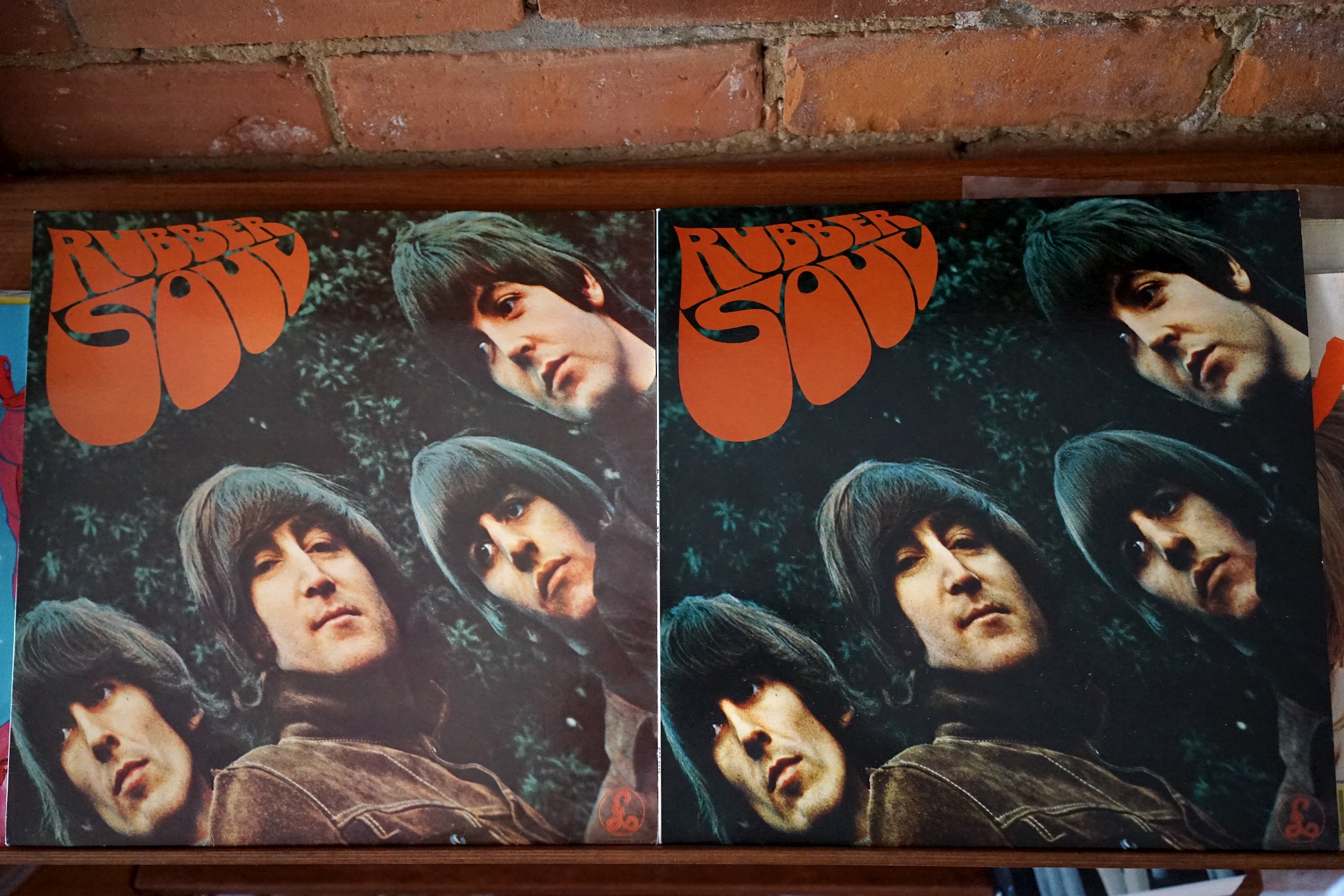 In my fourth Best Pressing Shootout in as many days — the coronavirus shutdown is having many unexpected effects — let’s look at my two pressings of Rubber Soul.

Back when I was a young lad in my twenties and just getting into vinyl — ah, the early oughts! — I naturally wanted to get my hands on pristine copies of all the Beatles records. Back in those days, I was calling a hard “bullshit” on the idea that first pressings were better than later pressings — my logic being that records “wear out” and that sound reproduction technologies are always improving, so that a new digital remaster could only be a good thing. You see, although I was way ahead of my time in being “into vinyl,” I was mostly in it for the cool huge covers and the big shiny discs (I was coming out of an adolescence of mp3s). I didn’t actually think they sounded better. (Devoted readers of this blog will now that I only really came around to vinyl sounding better than digital in the last year.)

Anyway, I wanted Beatles records, so I bought the only pressings that were then available. I don’t remember where I bought them — probably mail order — and I definitely don’t recall thinking at all about if they were “good pressings” or anything. But I did listen to the hell out of them. I’m sure that in the roughly 15 years that I’ve owned most of these, I’ve played each of them several hundred times. (Lo and behold, they haven’t worn out! I no longer believe that properly set up systems “wear records out.”)

The ones I got, I’ve later learned, were pressed in the UK in 1995. (Discogs dates them as 1987, but I think that’s wrong.) They were pressed from the first digital remaster of the catalogue — the one that went into the 1987 CDs — and were thus the first digital-sourced Beatles LPs, hardly a badge of honour. They’re spottable mostly by the telltale “direct metal mastered from a digitally re-mastered original tape to give the best possible sound quality” message and the catalogue numbers for cassettes and CDs on the upper right-hand corner. I don’t really know what direct metal mastering (or DMM) is, but I do know that Blue Note snobs turn their noses up at the French DMM pressings…

From what I’ve gleaned online, these Beatles DMM albums are not thought of very highly. Indeed, it was the nasty stuff people said about them that got me thinking I should invest in a Blue Box and get myself some all analogue, AAA versions of these wonderful records. (I’ve described the Blue Box in some detail in my Abbey Road shootout.)

I only received my Blue Box a few months ago and I haven’t had much of a chance to listen to them. I’ve determined that the Blue Box Abbey Road sounds really good, but still haven’t directly compared the Blue Box pressings to the DMM versions. So let’s have a go with Rubber Soul, a very fine record.

For my digital comparator, I’m using the 2009 remastered version on Tidal (CD quality).

(By the way, these were both ultrasonically cleaned, so the playing field should be level.)

This is a weird one. I started by listening Side 1, and was quite surprised to find that the DMM sounded significantly better than the Blue Box version. I could have lived happily with these discs after all!

But then I switched over to Side 2, and the Blue Box disc sounded significantly better than the DMM! The DMM quality was consistent across both sides — it really does sound very nice — but the Blue Box had a good-sounding and a bad-sounding side. I assume this is down to quality control. Bummer. I’ll need to keep listening to the others, checking carefully both their sides.

But man, the good side of the Blue Box pressing is amazing: lively, detailed, bright. It sounded to me a lot like my Transatlantic first pressing of Pentangle’s debut album: just stunningly lifelike and energetic. Which makes me wish Side 1 sounded that good, naturally — which I guess means I have to track another AAA version of this record. F%$@ing vinyl!

For the record, though, I’ll base my verdict on the “good” side of the Blue Box and declare it the winner.

By the way, the sibilance issues I notice throughout are in the recording and well-documented on those dark corners of the internet where people like me discuss recording quality. So not a setup issue…

Blue Box. “Drive My Car” is not my favourite track on the album, but it sounds great. Guitar on the left channel is especially clear and lively. There’s another guitar very very faintly audible in the centre that I’ve never heard before. Hard-panning Paul’s lyrics maybe wasn’t the smartest idea and they seem almost to distort (or have sibilance issues) at times. But a great audio experience. I love that fade-in on “Norwegian Wood,” which is the track I’ve been looking forward to. This sounds good, too, especially the sitar in the left channel. Hard-panning vocals onto to the right is again maybe not ideal for a headphone listener like me. “You Won’t See Me” is more of the same: very dynamic, especially nice backing vocals, but annoyingly panned lead vocals, with some distortion or sibilance. “Nowhere Man” is one of my favourite tracks on the album and I must repeat myself year again: acoustic instruments (drums, guitars) sound terrific, vocals sound a bit distorted all the way over in the right channel (no other instrument or sound comes across as distorted…). Nicest sound on this track is the Strat on the left channel. “Think For Yourself” (George song!) is one of the better-sounding tracks on the side. Vocals not hard-panned right, but rather double tracked left/right, definitely help. That funky fuzz guitar sounds terrific: lots of weight. Quite a lot of “pre-echo” on these Blue Box pressings… “The Word” has nice width, with the shaker on the right spreading the soundstage right out. Double-tracked vocals once again help. Acoustic guitars and bass on “Michele” sound beautiful: natural and delicate. Too bad it’s the inner groove track. The lead vocals sound much flatter than the acoustic guitars, drums, or backing vocals.

DMM. Hmmm, hey, not bad! Could be a levels issue, but this sounds really good. Guitar in the left channel on “Drive My Car” is thick and bouncy, the faint guitar is clearly audible, the vocal sounds less harsh and distorted. I think this sounds a little better than the Blue Box! “Norwegian Wood” is good too: acoustic instruments sound natural and the vocals aren’t distorted. More heft and impact, I think. “You Won’t See Me,” by contrast, has very distorted/sibilant vocals and comes across as harsh generally… Nice acoustic guitar and bass on “Nowhere Man,” but the usual vocal issues. “Think For Yourself” picks it up, as it did on the Blue Box pressing — shakers are similarly delicate, fuzz guitar similarly crunchy. “The Word” once again nice: very dynamic, snappy, good round bass and snappy electric guitar. “Michele” very pleasant as above, but the lead vocals are less flat, better sounding. Finishing this, my sense is that the DMM sounds quiet a bit nicer than the Blue Box pressing, though the sibilance does get a little out of control in a few places.

Digital (2009 remaster). I think there’s some added reverb here. I am somewhat relieved that the sibilance issues are also present in the digital version! Sounds good, lots of nice detail on the sitar. Maybe it’s a little “heavy,” plodding? I’m feeling an awful lot of “thickness” here and I’m not loving it…

Second-to-second direct comparison of DMM vs. digital. Very similar, but with a bit more detail and sparkle in the vinyl, as well as heftier bass. That kind of molasses quality on the digital is slightly perceptible, but not hugely. I’d put the vinyl about 10% better than digital, most noticeable in the sparkle of the acoustic guitars and the sitar.

S-2-s digital vs. Blue Box. A little less detail coming across on vinyl, vocals more muffled, definitely more sibilance. A little more sparkle on the sitar, but the digital wins here by 5%.

Digital. I’m again feeling a bit of that plodding quality, the molasses. I don’t think the fuzz guitar is quite as wooly or well-defined.

S-2-s digital vs. Blue Box. The fuzz guitar is better on vinyl but the overall presentation is a little flatter. Drums have more impact on digital and there’s more space. 10% better on digital.

S-2-s digital vs. DMM. A bit more slam, impact, detail, width on vinyl here. Lots of space, shading, reverb around the guitar in the left channel on vinyl, not as good on digital. 5% better on vinyl. How very interesting 🙂

A bit of casual listening through Side 2 (especially “What Goes On,” which is a great sounding track, and “I’m Looking Through You” with its many acoustic textures, and “Wait,” with its beautifully recorded drums, and the creepy and strange “Run for Your Life,” with its mind-bending opening L-R pan…) suggests that maybe the Blue Box sounds better on this side. Hmm… So it’s time for some more track comparisons.

S-2-s digital vs. Blue Box. Wow, the vinyl destroys digital here. Much more alive, bright, detailed. George’s guitar slices and dices and has all kinds of beautiful space around it. Bass on vinyl is juicy and lively, the drums are crisp and sharp. Digital loses out on dynamics and naturalness. Damn, that sounds incredible. 15% better on vinyl.

S-2-s digital vs. DMM. Consistent with Side A: about 5% better with slightly better finesse on cymbals and George’s guitar. But not as good as the Blue Box!

So now it’s the Blue Box pressing with a 10% lead. One more just to make sure we’re really on to something…

“I’m Looking Through You”

S-2-s digital vs. DMM. More like 10% now: better definition on the acoustic guitar and the clippety clops. Better balance than the bass-heavy digital. Could be a little brighter, sharper though, with a bit better detail…

S-2-s digital vs. Blue Box. Vastly better on vinyl. Bass drum comes through way more clearly, acoustic guitar on intro and throughout much more delicate. Bordering on “gross” here. No, it is gross. Vinyl is 20% better than digital here. The acoustic guitar is the great separator.

So Blue Box again 10% better. Well, that’s a weird situation. The Blue Box can and should be a lot better. But the pressing on Side 1 is messed up. Go figure.

I have read that a dished label like your DMM Rubber Soul is a Dutch version from 2003, even though it says manufactured in England, because EMI had stopped producing the records???

hifiafreply
– In reply to: James

Interesting! I’d never heard that. But the date would make more sense — I bought my copy around then.