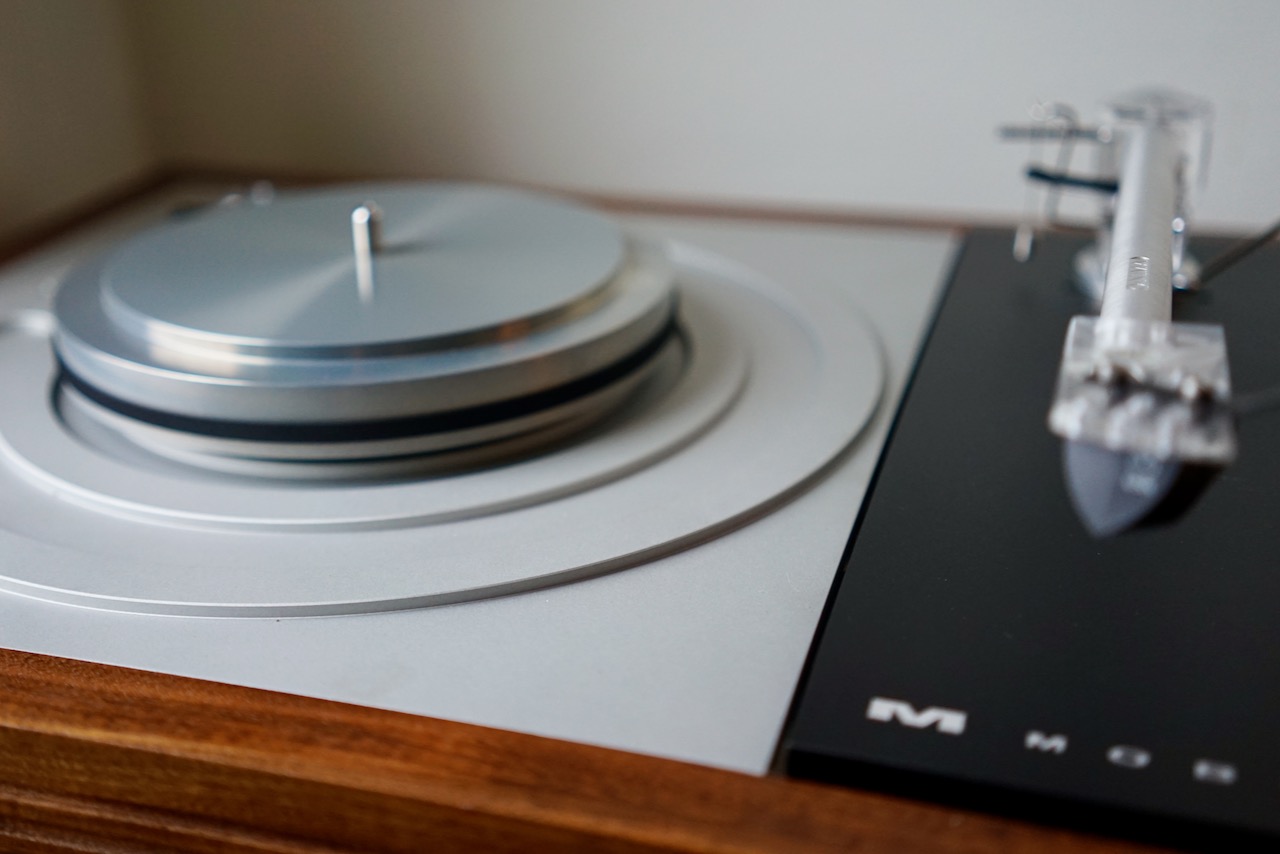 Well, I maybe wasn’t quite as excited about this as I was about installing the Mober subchassis — this was my second major bit of hifi DIY (say it out loud), so some the novelty had worn off. But still, I was pretty excited. This is a pretty fundamental upgrade and there were lots and lots of things to get right. It seemed pretty unlikely to me that it would make a major improvement in sound, but there were lots of reasons to be pumped about the Khan anyway.

Follow along as I give you all my thoughts!

What a beautiful sight to wake up to! I got started late last night when, after a session of record washing (I will describe by double-Spin-Clean setup on here sometime), I set up the jig and tore everything down to the barenaked plinth. The clown mirror kept a close eye on things while I was asleep.

On the left, the old, original stainless steel top plate. On the right, the aluminum Khan top plate from the no-longer-trading Tiger Paw. (It’s not clear if they’ll reopen for business, but I for one hope they do; I’d love to try their counterweights, the Tranquility, and — most of all — the Javelin tonearm.)

The Khan was the first product from Tiger Paw, which at the time was owned by the people who now run Tangerine Audio. Tiger Paw was subsequently taken over by Roger, who I don’t believe was involved in the company when the Khan was first designed. So it’s more or less a Tangerine Audio product, really. Except that Tangerine’s version of the Khan, the Karmen, costs twice as much as the Khan. (I got my Khan second-hand for a very good price.)

Anyway, suffice it to say that the whole genealogy and provenance of the Khan is somewhat confusing.

Less confusing: the supposed advantages of the Khan (and Karmen) over the stock Linn plate. Stainless steel is soft. As you can see, the Linn plate is slightly C-shaped, bumping up in the middle. When you attach it, it flattens out — but does it flatten out completely? With the stock plate, as such, the bolts to which the famous LP12 springs attach are often not sticking out absolutely perpendicular to the top plate (it’s not that the springs are bent; it’s that the top plate isn’t totally flat where they attach).

This is, apparently, one of the reasons that LP12 suspensions are so hard to set up: although there is a special tool made by Linn to get the bolts hanging totally vertically (the fact that the tool exists is a material admission that there is a problem, as well as an attempt at addressing it), it’s still tricky. Also: the tool is expensive.

The Khan should solve this mechanical problem by being totally rigid (aluminum doesn’t like to flex) and making its bolts Perfectly Perpendicular (TM). Some people claim sonic advantages, too, but it was the mechanical advantages and the prospect of pain-free suspension alignments that drew me to the Khan.

The Khan doesn’t just have straighter bolts, it also has more of them! The stainless steel top plate attached to the plinth via two wood screws. The Khan uses four separate bolts. My poor old 1987 plinth would, however, need some modifications to allow it to work with the Khan. Into the jig!

The main thing was to drill holes in the cross-braces, to accommodate two of the Khan’s mounting bolts. I’ve been obsessing over how to locate these holes for months. Finally I decided to use two 1-2-3 blocks to get the top plate in exactly the right spot, then scribe the location of the bolts.

Thank you, iPhone flashlight, for this snazzy and confusing image! I’ve got the Khan in place, up against the 1-2-3 blocks, and I’m about to scribe the location of the bolt hole underneath, on the cross-brace.

Here’s the “after,” with the bolt happily situated in its hole in the cross-brace.

This is how the other two bolts attach. It’s kind of a cool little system — though once they were tightened, they pulled a little off to the side. I hope I did this part right: I couldn’t find an instruction manual anywhere for the Khan, so I just kind of winged the whole installation process.

Old habits die hard, so of course I used some Phil Wood bicycle grease to lubricate all the bolts. Everything is nice and tight, including those two nifty guys.

Since I was doing some workworking anyway, I decided to make these very inelegant little shims for my OG 1987 rubber feet, which were sitting a little crooked with the bottom plate removed (my thick tonearm cable has nowhere to escape from with the bottom plate attached, and I hear the LP12 sounds better with it removed anyway…) These are ugly, but they work. Level feet!

I also opened up some more room in the cross-brace nearest the tonearm, the source of some trouble last time. Sorry for the ugly work, Graves of Sheffield Ltd! (I did, obviously, saw along the inked lines, and actually did some nice sanding, so it’s all quite tidy now, as you can sort of see below.) I’ll have to remember to celebrate this plinth’s 32nd birthday on March 30th.

All tightened up, we’ve got ourselves a new top plate. I absolutely wasn’t doing this for the looks — and all those cool machining swirls are totally invisible once installed — but I gotta say, the Khan looks pretty cool, especially the modern/classic contrast it makes with the old (almost 32!) afromosia plinth…

In more practical matters: one annoying thing that manifested itself at this point is the fact that the Khan doesn’t sit perfectly flush with the top of the plinth. This made leveling the armboard tricky later on. I assume it’s because the Khan is made for newer plinths and older ones like mine have slightly different dimensions? That’s total speculation, though — and it’s really close to flush…

The next step was removing the motor from the old top plate and swapping it over to the Khan. It felt very stupid going to all the trouble of reinstalling this almost-32-year-old motor and the Hercules II PSU when I have a Lingo 4 downstairs just waiting to be installed — but the whole point of this blog is to document the effects of every little change, so this means I can’t ever do two things at once. However, I’m not about to buy a strobe kit to do the old-fashioned screw tilt adjustments that old-fashioned motors require… so I just measured the exact height of both screws off the top plate and set them exactly there on the Khan. Gary Dilliott’s work can be trusted.

The motor’s in and I’ve got the Mober subchassis back in, too. Time to put some springs on those Perfectly Perpendicular bolts!

Not wanting to mess with a good thing, I was very careful to label exactly which springs and grommets came from which bolt when I removed them last night…

The Khan includes an aluminum cross-brace (“wire strap”) as well, so I installed it too. I’ll need a different, special one for the Lingo 4 — it’s waiting for me downstairs! — but I thought this guy deserved a bit of fun. Here it is, all ready for the Hercules II board…

And there’s everything all put back together! Time to turn it over and see how it looks!

Like that, is how it looks. Worthy of a clown’s tip o’ the hat, if I do say so myself.

I’m going to embarrass myself by showing you my actual bounce test.

I’m embarrassed in a few ways: I accidentally appear in the video; my camera isn’t level; I forget to fix my tonearm to its base, thus no doubt annoying the unipivot bearing…

And, I mean, is my bounce any good? Is it pistonic enough?? Honestly, I have no idea. It bounces pretty much up and down, it doesn’t knock on anything… but it’s not perfectly up and down, and it doesn’t bounce all that long. I’ve decided not to obsess too much about it at this point, and leave it as something to experiment with gradually, as I go along. What I’m doing for now is just getting the armboard level in the plinth, seeing if it bounces acceptably, and, if it does, leaving it as is. So far, so good: I haven’t done any “grommet-twisting.” Which is good, because I don’t really understand what grommet-twisting does, and I have no idea how to do it (as far I can tell, the tall walls of the machined wells that surround the larger grommets on the Mober subchassis totally prevent access to the grommets, so no twisting even seems possible.)

But enough about grommet-twisting. I’m happy enough with that bounce, so I’m leaving it like that…

Here it is, back in its home. See how nice it looks? The flat aluminum looks amazing with the Nima arm, which for the first time doesn’t look out of place on the LP12. Again, this was totally unexpected and unforeseen.

It looks cool from above, too.

You might notice that, once again, the armboard doesn’t sit dead-centre in the cutout: it’s closer to the platter side than to the outside, and closer the back than the front. As I mentioned when I installed the Mober, I’ve got no idea how you would adjust this, since the armboard and the subchassis are a single piece. Maybe with grommet-twisting?

As always, my first concern is just that it still works. The first spin went to Mingus Ah Um, and: good news! Sound!

On a dark, disgusting, rainy, windy, gloomy winter’s day, a little ray of sunshine — does Mingus Ah Um maybe sound a little better than before?

And, hey, does my current favourite-record-on-earth, Prince Lasha’s The Cry!, also maybe sound a little better than usual? Because, wow: it sounds really good.

But enough of that. The usual obsessively precise listening test report will follow in a couple of weeks. In the meantime, time to listen to some records…

Congratulations for this nice working progress!
I may also want to find a used Khan because i also ordered a Karousel bearing. I had a Cirkus bearing with a Tiger paw tranquility…
I saw you choose a Mober Sub-chassis and i got a Greenstreet Keel_Klone. Mober also offers a new aluminium top plate thicker (6mm) than the stock steel top plate. Since the Khan is discontinued the used Khan are more expensive than the new Mober top plate. Do you think the Khan should be a better choice than the new Mober one?
Regards

hifiafreply
– In reply to: Bernard Guillot

Thanks for the comment, Bernard — and this is a very timely question, as I am about to receive a Mober top plate tomorrow! Stay tuned for updates…

Installed a Tiger Paw on one of my LP12s, matched up against another LP12 the sound does have more inner detail but hard to say if that is also the tonearm contributing. The Tiger Paw is mated with a SMEIV the other LP12 with an Ittok LVIII MK2. If you want to center the arm board better just twist the springs along with the top rubber grommet a little until you get it. I fixated over it and got them pretty quickly to be properly aligned with the plinth.