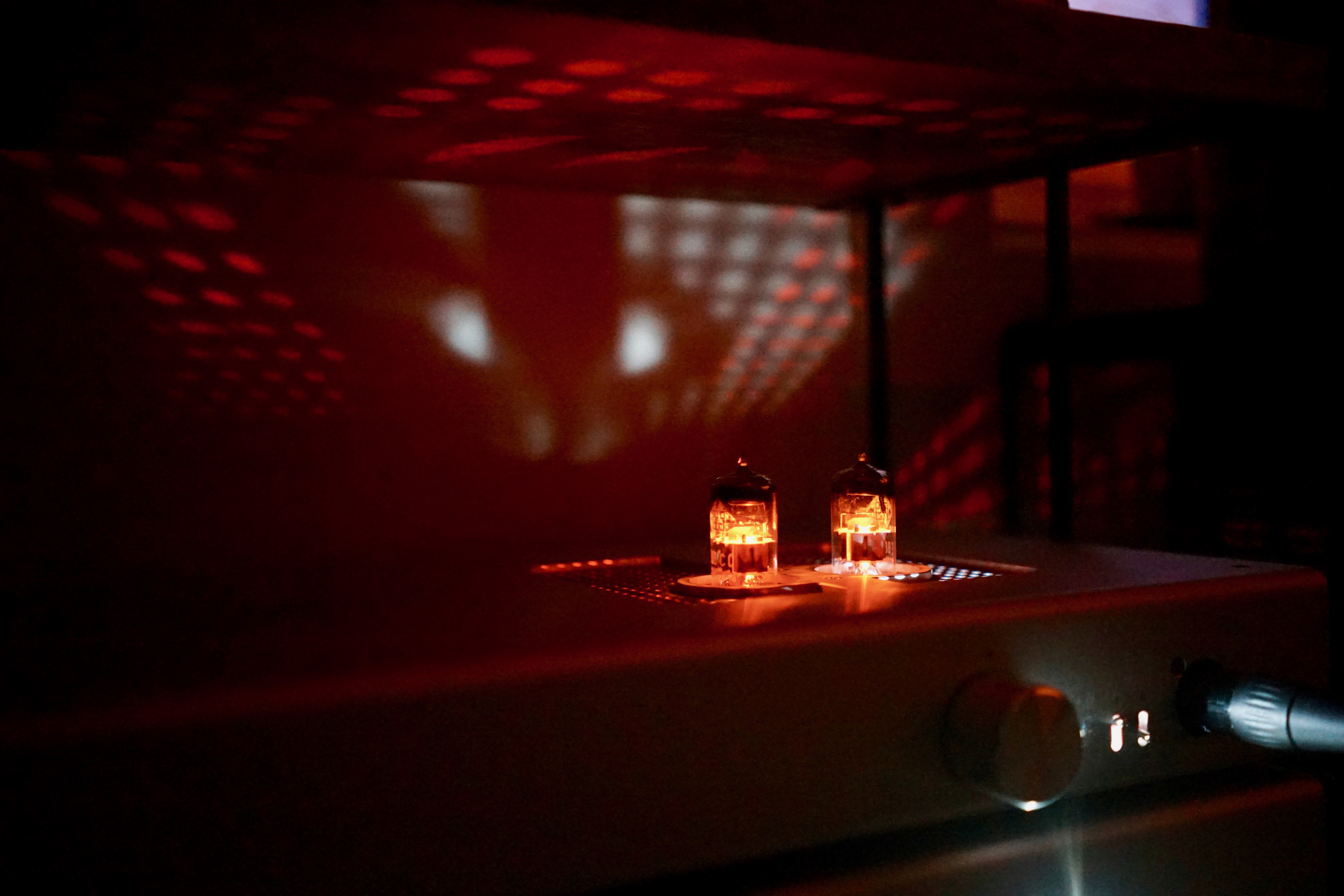 For pretty much as long as I can remember, I’ve been into music and music gear. How I got into it, I have no memory.

Some flashbacks to early days…

The smell, almost the taste, of the pine cabinet where my father kept his stereo system — a Pioneer record player with a faux-wood veneer; a matching receiver with a huge polished aluminum tuning dial, lit from behind with liquid blue-green; a shiny JVC tape deck with twinned rows of green lights that popped over to red when recording clipped. Him: Roy Oribson, Neil Diamond, Nana Mouskouri, Pink Floyd. My mom: Patsy Cline, Randy Travis, Jennifer Warnes, the Beatles. Me (7-inches bought from the Oakridge mall with my allowance): “La Bamba,” “Bad Medicine,” “My Prerogative.”

Some time in high school, my first job, taking digital photos of kids riding a pretend carousel at Storybook Gardens (a big Nikon SLR with a Kodak digital back), printing them onsite. Slow business most days, so lots of time to read What Hi*Fi? Where did I buy it? Which convenience stores stocked imported British hi-fi (always “hi-fi” from this point, never “stereo”) magazines in London, Ontario in the mid 90s? How did I find out about them? Why did I buy them? Didn’t sixteen-year-old me have more important things to think about besides the Marantz CD-63SE and NAD 304 he obsessed over for an entire summer?

A couple of summers later, before OAC, lying in bed late at night listening to my minidisc copy of Stereolab’s Dots and Loops, tracking the instruments as they panned from left to right on my Koss Porta Pros — the ones with the extended warranty at Radio Shack, so that I could break them on purpose every couple of months and get a new pair.

I’ve been completely obsessed with music, with records, with guitars, and with hi-fi gear since I was a kid. In high school, my first system, my minidisc player, my black Yamaha electric, and indie rock: Polvo, Pavement, Modest Mouse, Built to Spill, Yo La Tengo. In university, my first record player, a Pro-Ject bought on eBay for a bargain, plugged into the high school system, FTP sites, an Ibanez AS-200, and post-punk: the Rough Trade Wanna Buy a Bridge? compilation, Wire, Joy Division, the Homosexuals, The Fall. Grad school: an 80s Linn LP12, a Naim Nait 2, Bob Dylan, Beat Happening, Destroyer, Spoon, New Order, The Jam, The Who, Serge Gainsbourg (also, a very serious bicycle obsession, since cured). Afterward: the beginnings of the guitar collection, first stirrings of interest in jazz, The Go-Betweens, nostalgia for all the bands already listed.

The initial subject matter of this blog — the systematic, prolonged, concerted destruction and reconstruction of my 80s Linn LP12 — begins about two years ago, when I moved back to Toronto.

I had been in San Diego for two years. We’d never planned on staying permanently, so we never moved all our stuff down there. Most notably and painfully for me: I never moved my hundreds of records or my LP12, which remained in boxes in Marta’s parents’ basement. So when I got a job back home, and especially when we found a house — one where I’d have my own office — my thoughts turned to setting up my ideal listening room.

The room was small and boxy, so I’d focus on headphones. But it had a brick wall, so I’d be able to mount my LP12 on a dedicated shelf that would be totally isolated from footfalls and vibrations — something I’d dreamed of through many years of spongy hardwood at my grad school apartment. I found the shelf I wanted, ordered it from England before we’d even moved in. When we did, I drilled into the brick, got it set up, perfectly level. I bought some fancy headphones, Audeze LCD-3Fs, and ordered a Schiit headphone amp (also, a DAC, even though I knew it wouldn’t sound anywhere as good as my LP12). I got my hands on a unipivot tonearm — a Roksan Nima — and had it installed before the Schiit arrived. But the installation didn’t go smoothly, and was extremely expensive. Then the Schiit gear arrived, and the DAC sounded miles better than the expensively-upgraded LP12. And so the LP12 sat on its perfectly level, perfectly isolated shelf, unused, for two years.

Then, a few weeks ago, I thought, “Why don’t I just sell all my vinyl? Digital sounds so much better, and my vinyl is worth so much.” Just to be sure, I set up one last comparison session: one of my favorite albums, Yo La Tengo’s And Then Nothing Turned Itself Inside Out, on Tidal and on Vinyl. I fully expected to hear what I’d heard during all those listening sessions two years ago. But no: the vinyl sounded different, and not worse. What was the difference? For weeks I searched for the noun, then I found it: texture. In some ways, the digital sounded fuller, more authoritative, more in control. But the vinyl had texture, especially in Ira’s voice. I liked it better. The vinyl was staying.

If the LP12 sounded this good already, imagine how good it could sound with some work. I’d dreamed of all kinds of upgrades when I was living in San Diego, dying to be reunited with my records. Now there was a reason to do them.

So: start looking for used turntable parts; start scouring Discogs for first pressings of all your favourite records; start a blog.

In the next few weeks, I’ll start filling in some of the many blanks I’ve left in this first post.

But it’s a beginning.

OK, so this is a bit freaky. I found your site because I too have been trying to squeeze the most out of a venerable LP12. Mine is a ’76 red button beauty that I found armless & lidless in the dusty consignment section of my local audio store here in Montreal a week before lockdown. Google landed me on your incredibly detailed Mober SSP12 review and it convinced me to take the plunge.  Then a Tiger Paw Tranq popped up on CanukAudioMart and where do I find insane amounts of info? Yup, you too. So I dig a bit deeper into HiFiAF (great name, btw) and find you’ve also been down the route of a Herc II, Denon DL103, and even a problem-stricken Nima, My Nima was mysteriously generating its own excessive anti-skate that defied gravity and friction – when I opened it up I found 10cm too much wire, times 4, coiled up in the arm tube. The natural tendency for the wire to uncoil was pushing the arm out – I learned how to rewire an arm “on the job”.
Then I find you’re also into Naim chrome bumper stuff, Stereolab, Joy Division, The Jam, and MCM chairs (my listening chair is a replica Le Corbusier LC2)…as I say, freaky.
I didn’t go as far as you with the LP12 (yet) – I just installed a late 80s pre-Cirkus bearing to keep its character while improving pretty much everything else and I went for a Hana EH cartridge. That said, my initial LP12 investment of $400 has at least quintupled (lid, springs, armboard, Nima, Herc II, Tranq, bearing, cartridge, fancy mat). I also don’t have an awesome collection of guitars…just a humble pair of ukes.
My story is that I’ve slowly been building an audio system for a few years mostly from used gear and, through patience and fantastic luck, ended up going almost totally vintage Brit (I am a bit of a displaced vintage Brit myself): I have the LP12, Naim 42.5/HiCap/250 and Harbeth C7’s. Second-hand wouldn’t work for the streaming digital side – Allo DigiOne Signature (French, not British) & Chord Qutest.
So, just a note to say your site is entertaining AF. Thanks for sharing your thoughts. I still have a lot left to read. Keep going!

hifiafreply
– In reply to: David

This is indeed freaky, David! Thanks for reading, thanks for the comment! Sounds like we share hifi tastes, as well as many others. The most gratifying thing about all that vintage British hifi gear is that it looks awesome, tickles the nostalgic itch — and also sounds incomparably excellent. I’ve been experimenting a bit with amplification over the last few months — will post about it here eventually — and I have no doubt that Naim just sounds better than even the highest-tech recent offerings. There’s just something about it. I’d love to put together a full pre-Cirkus LP12 at some point. Indeed, I’ve got most of the parts lying around…