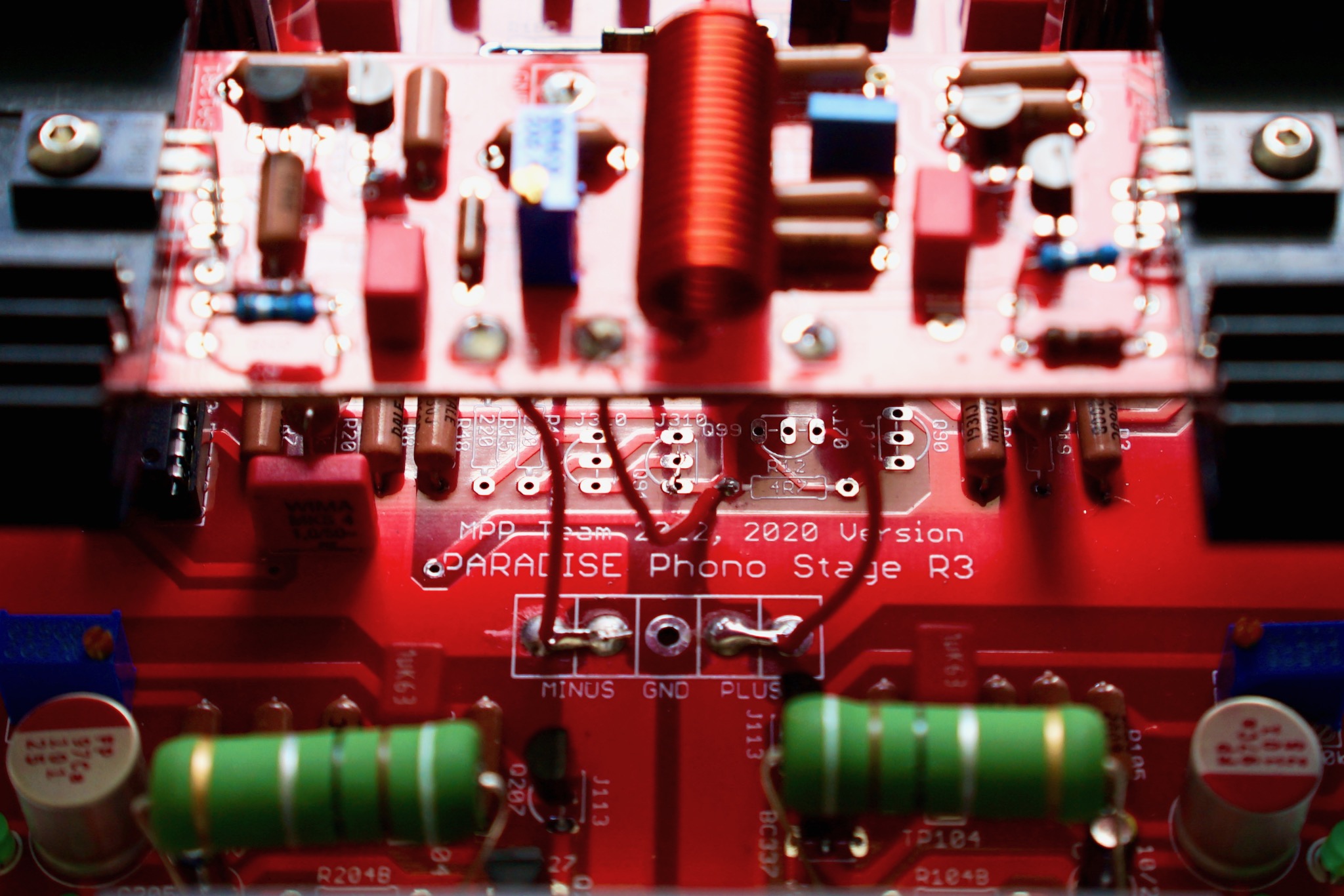 As you may have noticed, the regularity of my posts here has slowed down a bit in recent months. This is not because I’ve lost my enthusiasm for hifi. Quite the opposite: I’ve been so utterly obsessed that I’ve had no time to reflect on or write about it.

Mostly what I’ve been up to is converting my garage into a studio and listening space. This has involved a lot of painting and DIY construction. It has also involved buying a lot of gear; most notably, Yamaha NS-1000M speakers and a top-of-the line Naim Chrome Bumper amplification system (32.5/Snaps/135s; well, okay, the Snaps isn’t technically TOTL, but I have plans to make it into something better than a HiCap). It’s been a lot of work. It also sounds absolutely stunningly good. Without doubt, my loudspeaker setup in the garage is now much better sounding than the headphone setup in my office. But the details for all that will need to wait for later posts.

For now, I want to write about the Paradise I’m about to start putting together.

Well, that’s too large a question for me to answer. Even the much more modest question “What is a Paradise?” is a little beyond my abilities.

What I know is this. Sometime after lockdown began in March, I was invited by Mark/YNWaN to come and post on his AudioFlat forum, which I have been doing obsessively ever since (if you wonder what I’m up to on a day-to-day basis hifi-wise, that’s the place to look). The very first thing I noticed on that forum was a 100+ page thread entitled “Paradise…..more found than lost!” — which I then spent several hours reading through.

The Paradise, I learned, is a phono stage designed by a team led by Joachim Gerhard on the diy-audio forum. It is a complex discrete design with no op-amps and lots and lots of onboard regulation. It is fully mono, with separate boards for each channel and — in most implementations — separate power supplies as well. There is no commercial license for the Paradise, so it is built entirely by hobbyists — and skilled ones, too, as obsessive matching of transistors is one of the requirements of the design.

The Paradise thread on AudioFlat made for such a fascinating read because I got to watch as people like YNWaN were converted from skeptics to disciples — and as new posters joined the thread, expressed curiosity, got to listen to one, were blown away, and needed to have their own.

How did they get their own? Well, another AudioFlat member, Simon (@sq225917) made them for them. Not for profit but for the pleasure of it and from clear love of the design. He estimates it takes him 80-90 hours of labour to build one, and he charges an extraordinarily generous rate of £10/hr for his extremely specialized labour, building only for people he knows and likes. Another pleasure of reading the thread is watching as Simon comes up with refinements to the original design and his friends send their units back to him for upgrades, finding that their already-astounding phono stages come back sounding even better than ever.

A recurring motif in the thread is that the very limited supply of Paradise boards has run out and Simon is finally building his last Paradise, definitely the last one this time!, with some relief after all his years of hard, repetitive, concentrated work. But then someone finds another set of forgotten boards, or someone like Sylvain organizes another production run, and the whole process starts up again. It’s a much more joyful version of a different myth, with Simon as Sisiphyus, the Paradise as the rock, and the endless task of matching transistors as the trip up the hill. (The journey down the other side is a lot more pleasant, though.) Anyway, this has become such a well-known joke that Simon’s signature on the forum now reads “One more Paradise left to complete” — may it stay that way forever!

(You’ll just have to forgive all the puns. It happens with a device called “Paradise.”)

It didn’t take me long to decide I needed to try a Paradise. I’d been using the same Dynavector P75 for over a decade. Well as the P75 had served me, my rig had outgrown it. So I wrote a message to Simon, asking how to get on the list. I also did some Googling and discovered that a Canadian on diy-audio named Sylvain had just produced a new run of PCBs. I managed to score a set — and when I told Simon, he said, (and I quote) “Stick em in the post I’ll get cracking next week.” That was a lot sooner than I was expecting.

One problem: even on his extremely generous terms, Simon charges £2100 for a completed Paradise phono stage, far more than I had in my (let’s face it, entirely depleted) hifi petty cash. But he had a solution to that too. Again, I quote:

If you can handle a soldering iron the sensible option might be for me to prepare your main boards for you, and you do the rest?

And so another odyssey began.

Yes, I had done a bit of soldering — guitar wiring and a few (sketchy) guitar cables. But I had absolutely no experience with hifi DIY. So over the past several months I’ve been doing my best to learn. Thankfully, it has come to me quite naturally: after building a guitar pedal from a kit, I recapped my Nait 2 (a pretty big job) and have since recapped my Nap 135s, built a bunch of interconnects, and generally become quite competent with electronics. I may still have no idea what a capacitor does, but I certainly know how to order one from Mouser and solder it to a PCB.

As Simon worked away on my Paradise boards, it occurred to me more and more what a lot of work I had signed up for. Yes, clearly, the main boards were the hardest part, requiring the most skill — and piles of transistors. But there was still a lot of wiring and soldering to do, parts to source, and holes to drill.

And cases to find.

In the early days of Simon’s Paradises, he built them into four (yes, four) Naim shoebox cases. These were produced by AudioFlat co-founder Andrew/flatpopely, sourced from the same company that made them for Naim. As a Naim fan, I naturally found these very, very cool. Sadly, they are long since out of production — Simon now builds his Paradises into two (yes, only two) full-width Modushop cases.

Excellent as they undoubtedly are, I know I would not be happy unless I had my four shoebox cases. The question was how to find something that was no longer produced. I asked Mark/YNWaN, and he suggested asking on pinkfishmedia: maybe some people had bought more than they needed and would have some extras. This I did — and, amazingly, within 24 hours I had found not one, not two — not even four, but seven such cases. I bought them all, knowing I would find uses for the extra three.

That was the major task. Since then, I’ve just been ordering tons of stuff on Mouser and Amazon. If you’re curious to know exactly what, I detailed every single thing I needed in this post on AudioFlat.

Okay, so that would take care of the boxes and boards: they would have a place to live and they would amplify music. But of course they would also have to look cool.

I came up with all kinds of logo ideas, from simple geometric shapes to adaptations of the famous Twin Peaks owl logo (among other things, it’s supposed to represent heaven, earth, and hell, and it has a diamond in the middle, like the one on a stylus).

I had all kinds of ideas for funky ways of implementing mirroring, to visually reflect the fact that everything is dual mono, right and left. (I’m not sure how I feel about all this currently — most likely I’ll just put knobs on the right and logos on the left of all the boxes.)

At one point my idea was to do a Naim Olive-style rear-illuminated parallax design, using the Twin Peaks colors of brown and neon green. This was especially exciting because the main Paradise boards use neon green LEDs for non-illumination purposes — and, by capturing that light with some plexiglass and light tubing, I could create a very cool effect.

But it was all pretty complicated, and when I decided I liked the Chrome Bumper look better anyway, things got a lot simpler.

That’s the idea now (the ugly gradient is just my horrible printer — the background will be solid black). The original Chrome Bumper logos were silkscreened onto black polypropylene. I found some $1 polypropylene report covers at Dollarama that are exactly the right material, and I ordered a DIY silk screen kit. We’ll see how that goes shortly.

One little tweak I want to make to the usual Paradise design is working in a front-panel power switch. Given my love of Chrome Bumper dials, I’ve decided to use some big, beautiful HiCap-style knobs. I got these pretty 3D-printed ones from Witch Hat in the UK.

Okay, that should be my last pun. I was working on something to do with the fact that my name is Adam, but that will have to wait for later.

Anyway: imagine me having been expelled from the garden (birth), then wandering lonely through the fallen world for many decades (my life to this point), and then eventually finding my way back to the garden walls. That’s where I am right now.

In other words, I have all the stuff I need to start building my Paradise. The main boards are here, all the PSU boards are here, a billion components have arrived, I’ve got tons of shoebox cases, leagues of wire, coil upon coil of solder. We’re ready to scale the walls.

I’ll keep you posted. (Oh no, that was another pun. At least it wasn’t about heaven.)

I’m looking forward to you finishing this. I should mention there is a modest margin in the total price, it takes 80-90 hours to complete a build. I charge about £10p/h.

Well that is very modest indeed given the work and skills involved!

Great project! You wouldn’t by any chance have a leftover shoebox case? My 42.5 picked up a tiny, but really really really annoying corner ding while being serviced a while back. If you do, let me know how much you’d want, otherwise I’ll try pinkfishmedia… and if you have 2 I could Naimify my Raspberry-Pi streamer. Cheers!